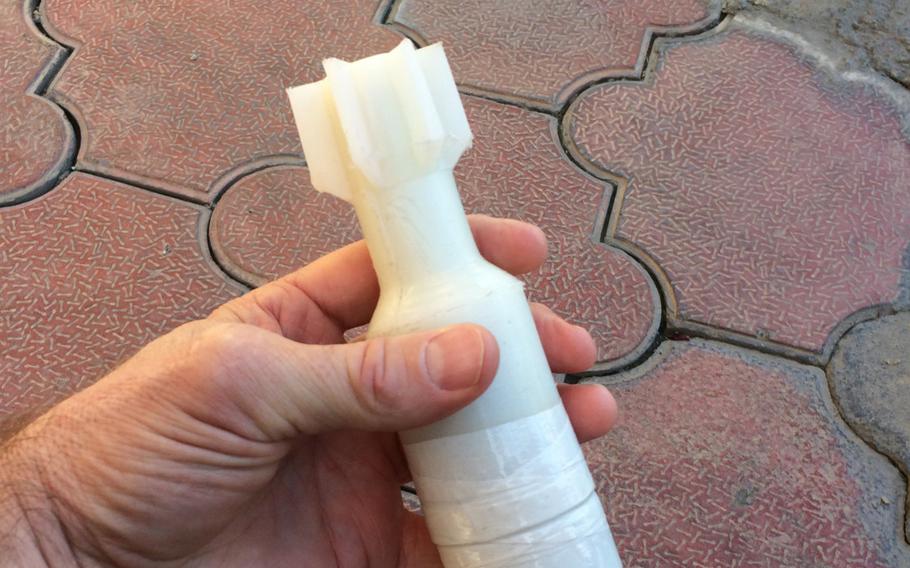 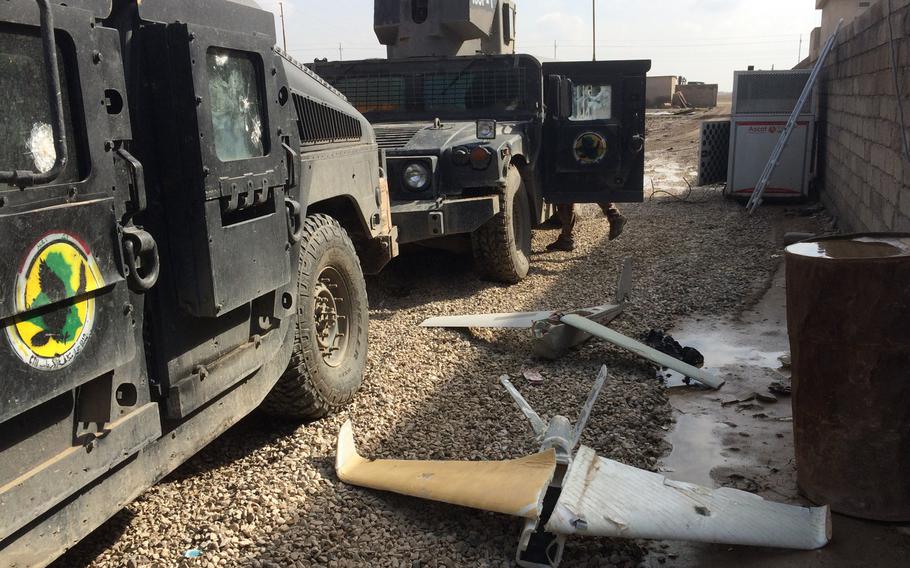 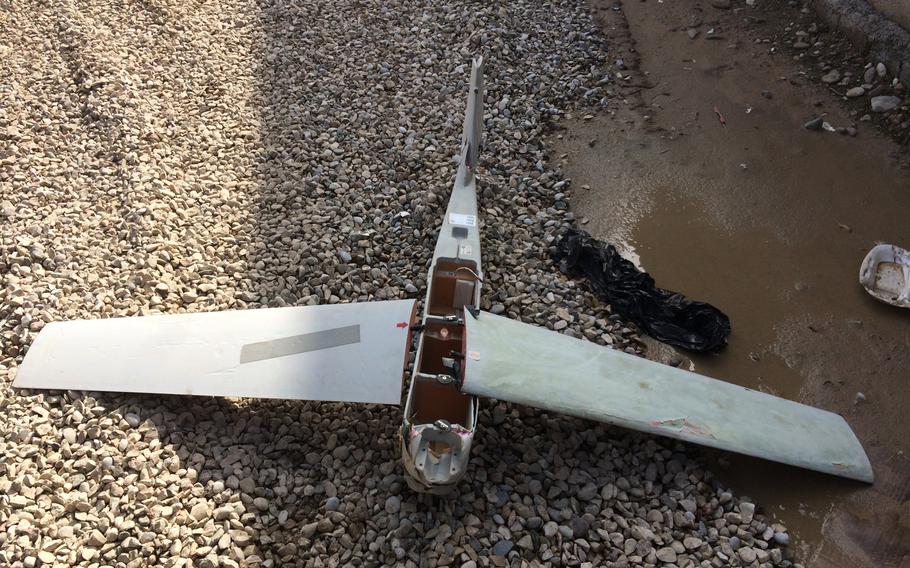 The wreck of an Islamic State drone captured by Iraqi special forces in Mosul, Iraq. (Seth Robson/Stars and Stripes) 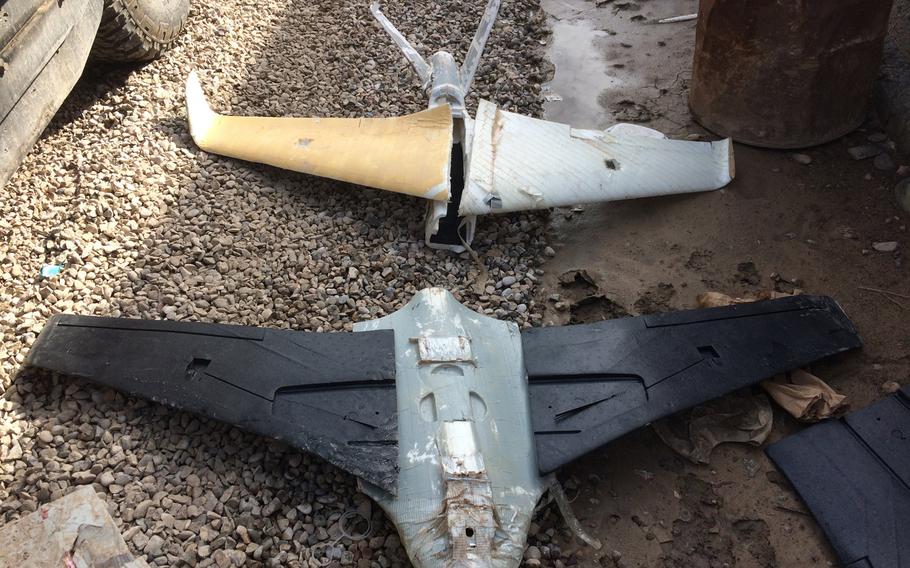 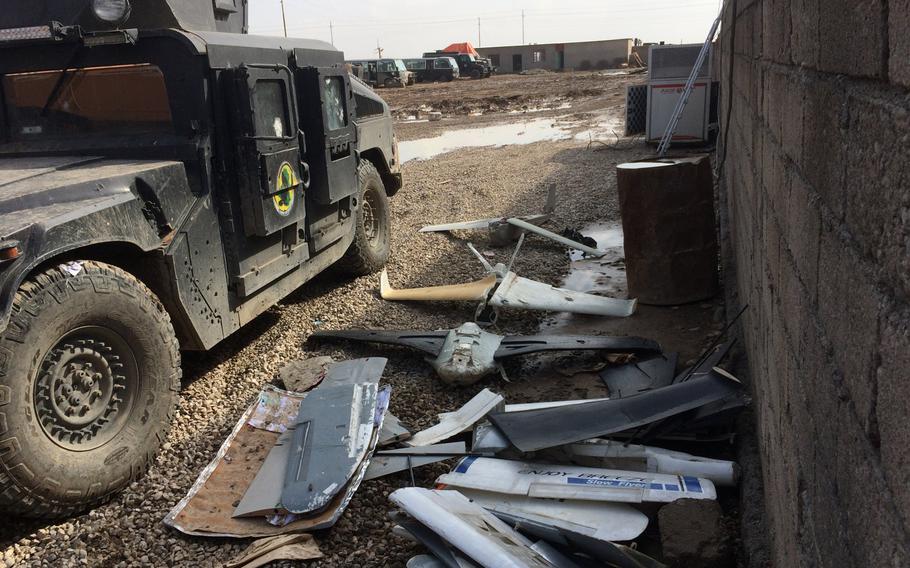 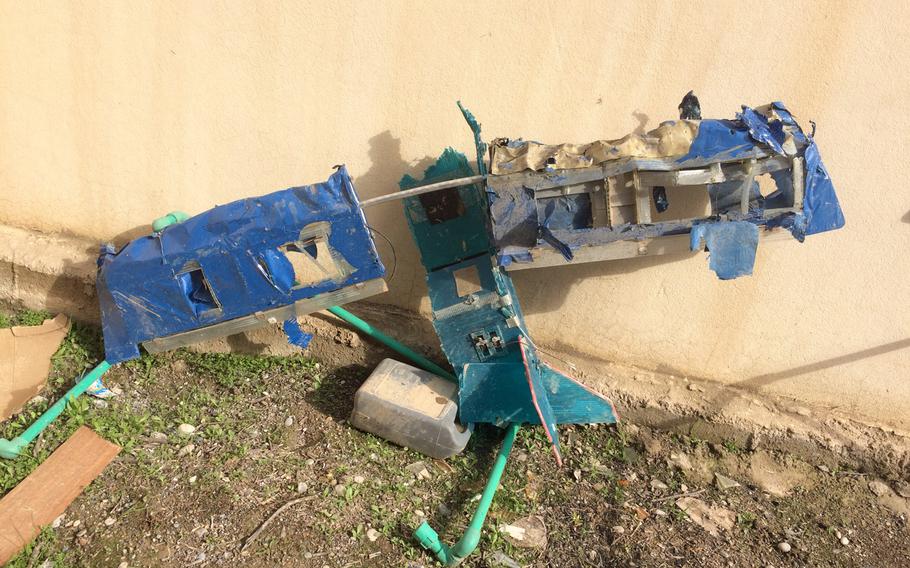 Iraqi special forces have asked for U.S. anti-drone weapons to protect their troops in the coming battle to drive the Islamic State militants from Mosul’s western suburbs.

The extremists have used drones for surveillance in the past elsewhere in Iraq, but Mosul is the first location where government forces have been exposed to attack drones, al-Saadi’s soldiers said.

The commander, whose elite unit spearheaded the drive into the heart of the city in recent weeks, said he believes the enemy still has a large supply of drones waiting to use to defend their territory.

Government forces will have to have an anti-drone weapon in each battalion by the time they cross the Tigris River to capture the heavily populated western half of Mosul, he said.

DroneDefenders are rifle-like devices that emit radio waves at drones up to 1,300 feet away to disrupt their links to the people controlling them, according to manufacturer Battelle’s website.

The Americans may also have fielded the larger Anti-UAV Defense System to protect their forward operating bases. Liteye Systems, which makes the device aimed at countering unmanned aerial vehicles, says on its website that it is deployed with the U.S. military.

That system can detect drones up to 5 miles away using radar, track them with high-resolution cameras and disrupt them with a directional radio frequency inhibitor, the company’s website says.

U.S. Central Command has released images of commercial quadcopter drones recovered from the battlefield in Mosul.

However, there were no quadcopters in a large stack of captured enemy drones near a farmhouse where al-Saadi was based on the outskirts of Mosul on Monday.

No two drones in the collection were alike, but all were fixed-wing craft with wingspans comparable to large birds. Some were made of polystyrene, others seemed assembled from kits, and some looked like crude, homemade contraptions likely put together in a hurry on the battlefield.

Small electric motors that looked as though they might have been removed from kids’ toy cars were installed in wings and tails to control flaps and rudders.

“The things they need to make them are easy to get,” al-Saadi said.

It wasn’t clear how the insurgents piloted the drones, but the Iraqis showed off cellphone footage from one that included birds’-eye views of Mosul’s sprawling neighborhoods.

Without the American high-tech defenses, the Iraqis try to shoot down approaching drones with small arms or run for the shelter of armored vehicles or buildings during attacks, soldiers said.

One of the special forces soldiers, Lt. Mohammed Kasem, 25, of Baghdad, said the first Islamic State drone attacks in Mosul were successful because they were unexpected. “I saw three soldiers injured by a drone. They were surprised,” he said.

Iraqi troops can hear the drones coming before they see them. As soon as they appear overhead, people start shooting at them, Kasem said.

The soldiers were nervous during the first attacks, but they’ve adapted to deal with the new weapons, he said.

“People only got hurt in the beginning,” he said. “It doesn’t hurt you if you are inside a Humvee or a building.”

The special forces troops showed off several dozen small, plastic grenades that they said were designed by the enemy to be dropped by drones. The captured bombs, shaped like larger conventional munitions, looked as though they might have been made on a 3D printer.

They also unrolled a silver weather balloon that the enemy had attached cameras to in an imitation of the massive, blimp-like aerostats that were used by U.S. forces to monitor Iraqi cities from the air.

Al-Saadi said he had been attacked by the drones while visiting his men in the field.

“It’s not like a sniper,” he said of a drone attack. “At least you can see it coming.”