Islamic militant attacks up overall, but ISIS incidents down in Africa 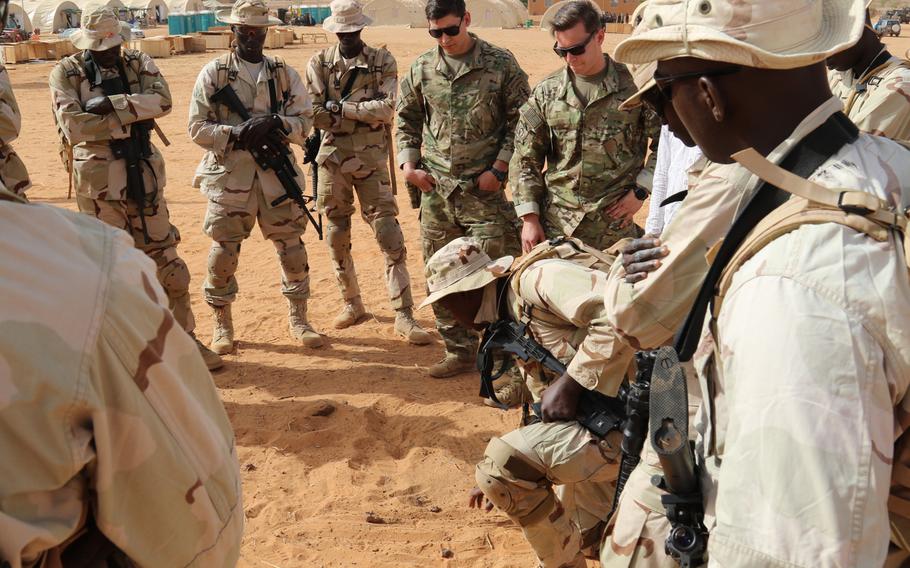 A Senegalese squad leader uses rocks to explain movement techniques during the Flintlock 18 exercise on April 12, 2018, in Tahoua, Niger. Islamic militant attacks rose slightly during the past year in Africa, according to the Africa Center for Strategic Studies. (Courtesy of U.S. Africa Command)

STUTTGART, Germany — Attacks by Islamic militants in Africa increased slightly in 2017, with violent incidents from groups in western Africa spiking and Islamic State actions waning, according to a new report.

In Africa’s Sahel region — a swath of territory that includes several western African countries in the greater Sahara — violent events linked to militant Islamist groups tripled during the past 12 months, according to a report by the Africa Center for Strategic Studies.

The center, a U.S. Defense Department-affiliated think tank that tracks attacks in Africa, reported 377 violent episodes in the Sahel and 895 fatalities during a 12-month period that ended Sept. 30. Most of the incidents were concentrated in Mali.

“Expansion of violent events linked to an array of militant Islamist groups in the Sahel highlights the growing scope of security challenges facing this region,” the report said.

The U.S. military is building a new drone base in Niger to better monitor militant groups and U.S. troops also serve as advisers to local forces in the region. The dangers were brought into focus when four American soldiers were killed in an October 2017 ambush by Islamic militants near Niger’s border with Mali.

The overall escalation in the Sahel was attributed to a coalition of militant groups operating under the Jama’at Nusrat al Islam wal Muslimin, a newly formed al-Qaida-linked umbrella organization, the ACSS report said.

Another organization in the Sahel — Abu Walid al Sahrawi’s Islamic State in the Greater Sahara — was linked to roughly a quarter of all violent events involving militant Islamist groups in the Sahel in the past year. There also are signs of collaboration between the Al-Qaida and ISIS affiliates, the report said.

Across Africa, there were 2,919 violent events linked to Islamist groups during the past 12 months, compared to 2,767 from the previous year.

Meanwhile, ISIS-linked attacks declined by 17 percent overall in Africa with 281 violent events and 1,371 fatalities. ISIS’s main area of operation in Africa is in Egypt, with more than 80 percent of attacks occurring in that country’s Sinai Peninsula, the report said.

ISIS has sought to establish a foothold in Africa during the past few years and has attracted the U.S. military’s attention in the process. In 2016, ISIS fighters were in control of Libya’s coastal city of Sirte, but an offensive by Libyan forces backed by U.S. air power dislodged the group. U.S. Africa Command conducted about 500 strikes during the four-month campaign in Libya.

AFRICOM still carries out occasional strikes in Libya, but the main American military effort in Africa now is centered in Somalia, home to Africa’s most active militant group, al-Shabab.

Al-Shabab was linked to 1,562 violent events over the past 12 months, roughly equivalent to the number of incidents reported over the previous year, ACSS reported.

“This represents 54 percent of the total reported violent events associated with militant Islamist groups in Africa,” the report said.

An October bombing in Somalia’s capital of Mogadishu, which killed about 600 people, was responsible for most of the Shabab-linked civilian fatalities.

During the past two years, AFRICOM has ratcheted up the pressure on al-Shabab, conducting regular airstrikes against the group.

U.S. special operations forces operate as front-line advisors to Somali troops involved in the fight against the militants.