ISIS nearly defeated on the battlefield but remains dangerous, US military says 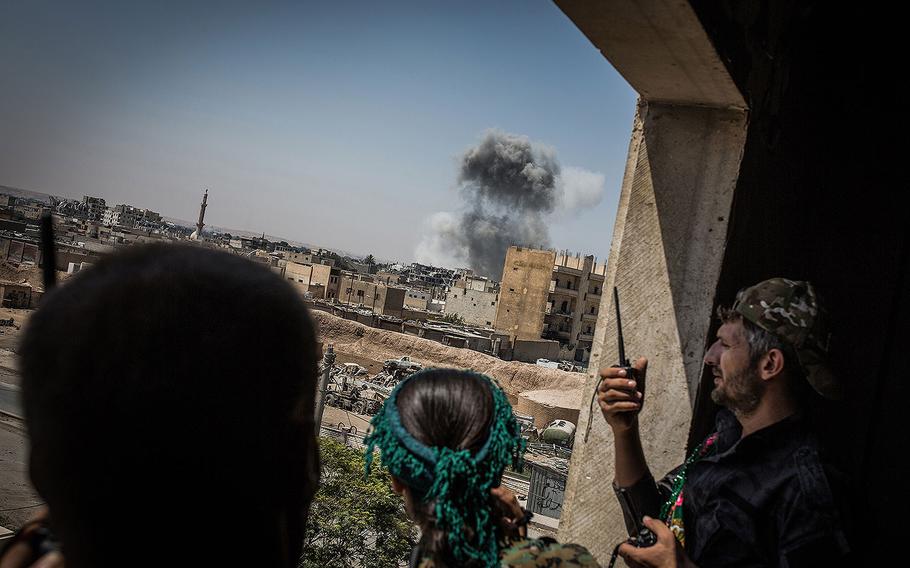 WASHINGTON — American-backed forces have cleared the Islamic State from more than 97 percent of the land that it once controlled across Iraq and Syria, yet the terrorist group remains a significant security threat in both nations, a U.S. military spokesman said Tuesday.

The United States estimates less than 3,000 ISIS fighters remain in Syria and Iraq, with the vast majority confined to small chunks of land that the group still occupies along the Euphrates River, south of Raqqa in eastern Syria. In Iraq, small groups of the militants remain in several areas of the country, launching occasional attacks on Iraqi security forces, said Army Col. Ryan Dillon, a spokesman for the U.S.-led Operation Inherent Resolve coalition.

“There is still work to do,” Dillon told reporters at the Pentagon. “When they are defeated, we have to make sure they cannot come back.”

Recent fighting in Syria has centered on the village of Abu Hamam about 30 miles from the country’s border with Iraq along the Euphrates, Dillon said. ISIS continues to provide a challenge to SDF fighters in that area with vehicle bombs, rocket and mortar fire and counterattacks, he said.

“There has been some fierce fighting,” Dillon said. “This specific area is not just a pocket of two or three or five to seven [ISIS fighters], it is much more formidable.”

ISIS’ resistance has required the continued assistance of U.S. military advisers who remain embedded with the SDF forces to assist them as they battle the terrorist group. That is the reason that the Pentagon has yet to pull out the vast majority of its 2,000 or so forces inside Syria, Dillon said.

The United States pulled out about 400 Marine artillerymen from Syria earlier this month once commanders determined they were no longer needed. Dillon said he expected similar decisions could come as ISIS loses more territory.

Nonetheless, like in neighboring Iraq, the United States intends to leave some troops in Syria for the foreseeable future, he said.

The roughly 5,200 troops in Iraq have shifted their mission somewhat in recent weeks, since Iraqi Prime Minister Haider al-Abadi declared “total victory” Dec. 9 over ISIS in his nation. Dillon said U.S. troops continue to train Iraqi security forces at dedicated facilities throughout the nation, but they have largely ceased advise and assist operation with combat units.

Still, the American troops will remain in Iraq as long as they are welcomed by the country’s leadership, Dillon said.

The terrorist group still poses a threat to Iraq’s security, which it demonstrated Tuesday when a small band of ISIS fighters launched an attack on Kurdish peshmerga forces in northern Iraq.

Local reports indicated a group of about 25 ISIS militants attacked peshmerga troops in Mahkmour, a small town about 60 miles southeast of Mosul. The reports said at least five ISIS fighters were killed and a peshmerga fighter also died in the skirmish. Dillon confirmed the attack occurred but could not confirm the casualties.

He said American personnel were not involved in the fighting.

It was at least the second similar attack of a small band of ISIS fighters against peshmerga fighters in northern Iraq in the last week.

Pentagon officials believe ISIS could devolve into a less centralized organization of terrorist cells spread through Iraq and Syria as it loses the last bits of its caliphate, some 34,000 square miles that it controlled across Syria and Iraq at its height in 2014.

Dillon declined to estimate when ISIS would be expelled from the final portions of territory it holds in Syria.

He vowed the United States would continue to back its partner forces in Iraq and Syria until ISIS is removed from that territory and its remnants had been “hunted down.”