ISIS in Somalia recruiting up as US airstrikes continue 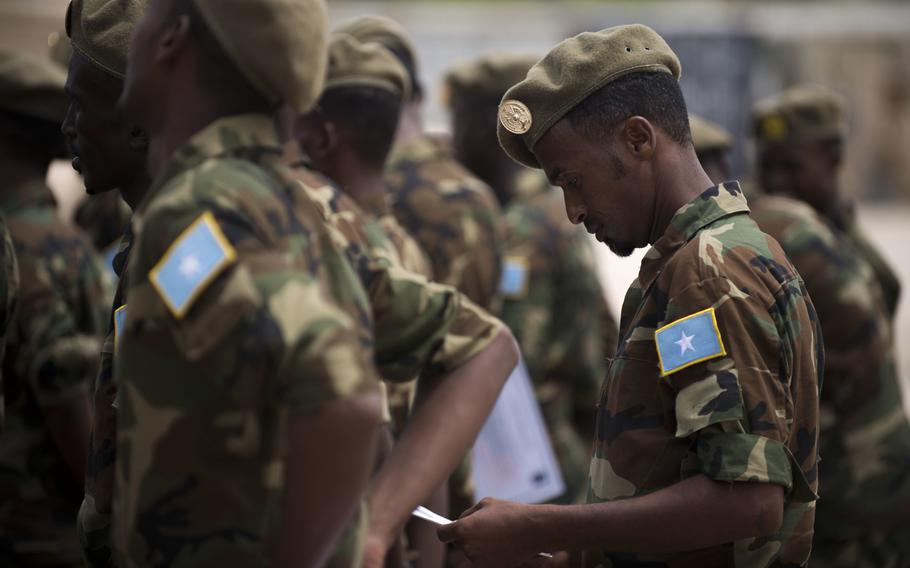 STUTTGART, Germany — Islamic State militants holed up in northern Somalia are recruiting fighters fast enough to offset battlefield losses despite an uptick in U.S. airstrikes in the country, U.S. Africa Command said in a new analysis of the group’s force strength.

Since April, AFRICOM has launched about eight airstrikes against ISIS-Somalia, killing roughly 20 militants, including the group’s second-in-command. But while some past estimates by security analysts have put the size of the militant group at between 100 and 200 fighters, military officials now say the group could be larger.

“ISIS-Somalia probably has up to 300 adherents, with the majority of fighters operating across northern Puntland,” said AFRICOM spokeswoman Samantha Reho, referring to the country’s northeastern region. “Although airstrikes have removed ISIS-Somalia terrorists from the battlefield, recruitment efforts in the region may offset some of the terrorist group’s losses.”

ISIS-aligned militants have been a small but persistent presence in Somalia for several years. The group is concentrated in the Bari Region of Puntland, a semi-autonomous region on the tip of the Horn of Africa.

The group is far smaller than the al-Qaida-aligned Al-Shabab group, which has an estimated 5,000 fighters and has waged a long struggle to overthrow Somalia’s weak central government. Until the past month, nearly all of AFRICOM’s airstrikes in Somalia have focused on Shabab rather than ISIS elements.

Still, the emergence of an ISIS affiliate complicates security operations in the country and has prompted the U.S.-backed Somali military to take concerted action against the group. Somalia’s military, with the help of “partner forces,” has made a push into territory where ISIS operates, according to AFRICOM.

AFRICOM says ISIS-Somalia is able to take advantage of the clan ties of its key leaders to gain influence and recruit members.

“In addition to clan loyalty, segments of the local population likely support ISIS-Somalia — and in some cases join the group — for a range of other reasons, including monetary, and a belief in ISIS’s ideology,” Reho said. “These factors provide ISIS-Somalia a potential pool of recruits.”

While ISIS-Somalia remains a small force, its successes in recruitment resemble that of the larger Islamic State affiliate, ISIS-West Africa, which operates in Nigeria and the broader Lake Chad region.

That group has made battlefield gains in northeast Nigeria, launched cross-border attacks in places like Niger and begun laying the groundwork for a proto-state. AFRICOM has said the group is attempting to replace the role of the Nigerian state in places where the population is under its control.