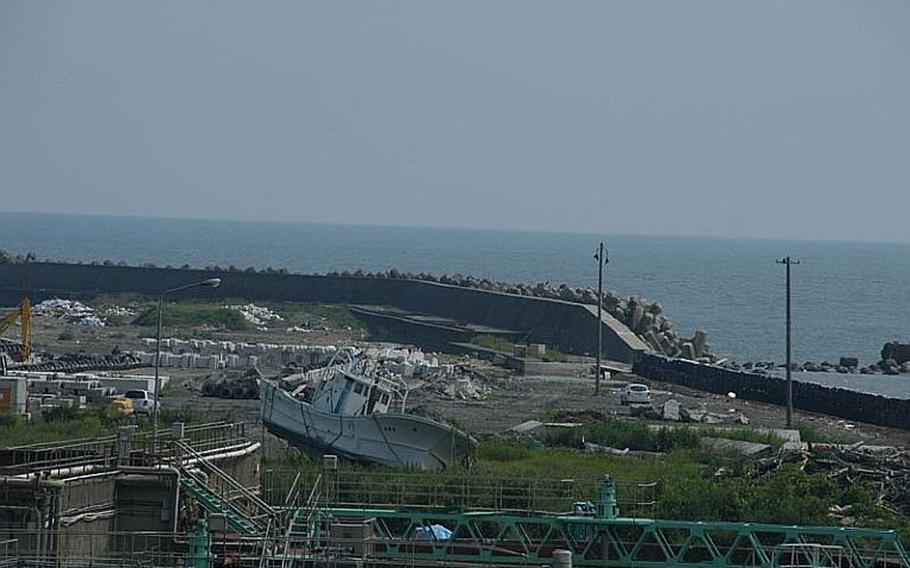 Buy Photo
Five-a-half months after U.S. forces arrived in this battered fishing town damaged fishing vessels dragged out of the sea by the tsunami still rust on the shore. (Seth Robson\Stars and Stripes)

Buy Photo
Five-a-half months after U.S. forces arrived in this battered fishing town damaged fishing vessels dragged out of the sea by the tsunami still rust on the shore. (Seth Robson\Stars and Stripes) 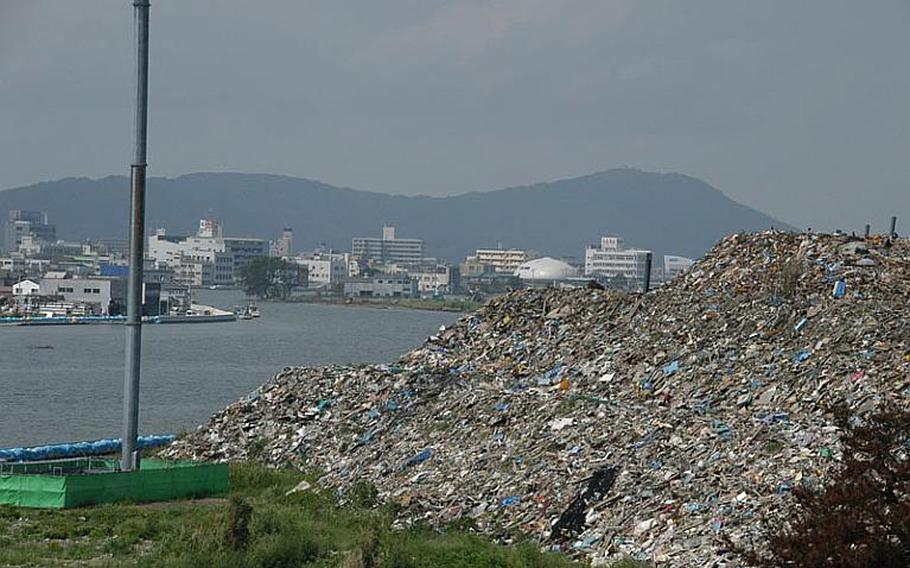 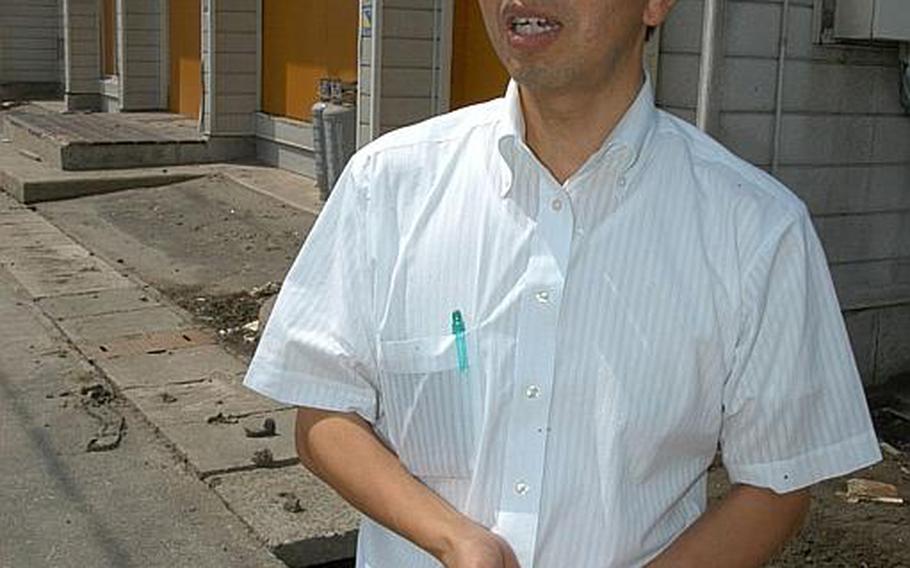 Buy Photo
Masahiro Shoji, 65, and his wife Hiroko, 61, recently returned to their severely damaged home, which sits above the family business, a factory supply warehouse, in an industrial part of Ishinomaki. (Seth Robson\Stars and Stripes) 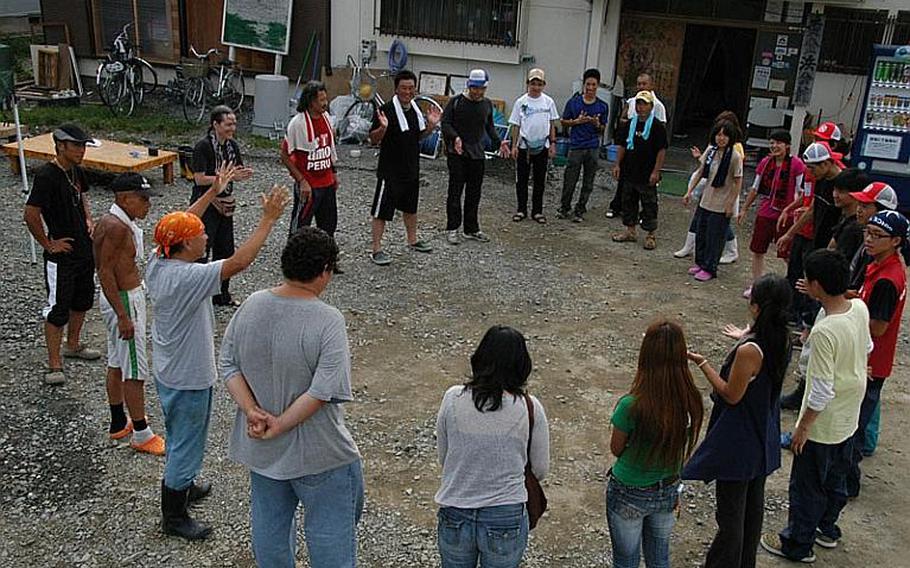 Buy Photo
Volunteers clap and cheer at the end of a day clearing debris from the streets of Ishinomaki. (Seth Robson\Stars and Stripes) Buy Photo
Fujita Toshihiko, 48, is helping people in his Watanoha neighborhood, five-and-a-half months after he watched his mother and aunt being swept away by a tsunami. (Seth Robson\Stars and Stripes)

ISHINOMAKI, Japan &mdash; Almost six months after this fishing town was battered by a tsunami, the piles of debris from demolished homes remain mountainous.

Neighborhoods, where relief convoys struggled to make their way between damaged buildings and wrecked cars, have been swept clean by bulldozers. Places that were home to thousands are now muddy fields. The stench of rotting fish hovers over the town.

About 29,000 Ishinomaki residents lost their homes in the disaster. Some have left to make a new start elsewhere. Many others are digging in to help with the seemingly endless task of rebuilding their shattered city.

Fujita Toshihiko, 48, helped U.S. troops deliver water in his Watanoha neighborhood in the aftermath of the March 11 disaster.

Toshihiko was upstairs in his home when the earthquake struck and he says he remembers crouching on the floor as his family&rsquo;s possessions crashed down around him. The force was so great that it jammed the front door closed, trapping his elderly aunt, Hikoko, outside. Toshihiko called to his mother, Yoko, to come upstairs as the tsunami approached.

Instead, with water rising quickly outside, his mother opened a window and grabbed her sister&rsquo;s hand to try to drag her inside.

&ldquo;People probably have an image of a big wave that breaks over all the houses and buildings, but in reality a tsunami takes to the road like cars,&rdquo; Toshihiko said last week. &ldquo;There&rsquo;s a point where the water rises suddenly and takes everything.&rdquo;

Large trucks and people were floating past the house when a massive wave swept through and carried his mother and aunt away, he said.

Trapped on the roof of his house for four days, he could see his mother&rsquo;s lifeless body lying in the debris below. He recovered her with the help of emergency workers once the water subsided. His aunt&rsquo;s body was found a short distance away.

These days Toshihiko is still in his neighborhood, living with his one surviving aunt, running a soup kitchen and helping organize teams of volunteers who come to the area to help clear debris.

Toshihiko said his house is a &ldquo;pile of rubble,&rdquo; but he stays working in his neighborhood because it&rsquo;s a job nobody else wanted.

He&rsquo;s frustrated by local politicians who, he said, only visit the area when celebrities are in town, and upset that survivors don&rsquo;t get more financial assistance.

Toshihiko cited the case of an elderly couple denied extra financial help after they replaced their tsunami-damaged car with government compensation money.

&ldquo;In Ishinomaki you need a car to survive,&rdquo; he said. &ldquo;Having a car is not a luxury.&rdquo;

Matthew Zoric, an English teacher living in Saitama, about an hour north of Tokyo, has been coming to Ishinomaki to help hand-out supplies and clean-up neighborhoods since April. He just finished his second two-week trip to the area during his summer vacation.

&ldquo;I&rsquo;m not really a religious person but I just felt in my heart that I needed help up here,&rdquo; the 28-year-old Chicago native said. &ldquo;I&rsquo;ve lived in Japan for six years. I&rsquo;ve learned to speak Japanese by myself and learned to live here by myself. Japan has become my home.&rdquo;

Zoric said he&rsquo;s seen plenty of progress since his first trip to Ishinomaki in March.

&ldquo;It&rsquo;s slow but steady,&rdquo; he said. &ldquo;When I first came up, there was no water gas or electricity and now they have that in most places.&rdquo;

Zoric and other volunteers with whom he works spent their first days in Ishinomaki cleaning people&rsquo;s houses.

&ldquo;There was debris everywhere and we&rsquo;d just throw stuff in piles on vacant lots &ndash; everything from broken dishes to kids&rsquo; toys and people&rsquo;s clothes.&rdquo;

More recently the volunteers have been getting into the finer details of street cleaning, such as clearing blocked gutters, said Zoric, who&rsquo;s also been distributing donated items at a community center and teaching English at a local kindergarten.

The young kids in Ishinomaki are not very different from those he teaches at schools in Saitama, he said.

&ldquo;They are as happy as ever and they just want to play,&rdquo; said Zoric, who spent his summer break in Ishinomaki. &ldquo;You wouldn&rsquo;t know anything happened.&rdquo;

At the end of a hard day&rsquo;s work, Zoric and the other volunteers gather in a circle in a muddy car park surrounded by damaged buildings to clap hands and cheer, a ceremony that helps keep spirits high in a place where people have seen so much tragedy.

Zoric said he&rsquo;s been brought to tears at the tremendous loss.

He recalled finding a child&rsquo;s school backpack on a pile of mattresses pulled from the debris.

&ldquo;I opened it up and saw that it belonged to a little girl from the local elementary school,&rdquo; he said. &ldquo;It had her name and telephone number and some pictures that she had drawn. When I saw that I fell to my knees and just broke down. I gave it back to the school but I don&rsquo;t know if the little girl is alive or dead.&rdquo;

Masahiro Shoji, 65, and his wife Hiroko, 61, recently returned to their severely damaged home above the family business, a factory supply warehouse, in an industrial part of Ishinomaki.

In the days after the disaster, the Shojis built a makeshift bridge over fetid flood water to reach the warehouse, which they had to enter by climbing a ladder, walking across a roof and crawling through a window.

In late March, their neighborhood was largely untouched by recovery efforts &mdash; other than soldiers who came there to search for bodies. There was no water nor electricity, and streets were flooded with black mud, towering piles of debris and wrecked vehicles.

By last week, most of the debris had been cleared from the Shojis&rsquo; neighborhood and the couple, which had been forced to move out of town, were back living above their business, which is booming &ndash; selling tools to local factories working to get back online.

The couple are working extra hours because eight of their 16 employees moved away. They were planning to take on several additional workers under a city program that offers incentives for businesses to hire local residents, he said.

&ldquo;Paper companies, production plants are all buying right now,&rdquo; Masahiro Shoji said. &ldquo;These factories are slowly building their businesses back up. Because of the relief efforts we are getting a lot of business.&rdquo;

The couple are uncertain about the long-term outlook, but expect to be supporting reconstruction for three to five years.

One thousand construction workers are rebuilding a paper factory near their warehouse, he said.

&ldquo;Reconstruction workers have booked out all the accommodations in Ishinomaki, so there is still a lot of traffic on the road to Sendai where a lot of workers are staying,&rdquo; he said.

Electricity was restored to the Shojis&rsquo; neighborhood in late May, but that didn&rsquo;t help the owners of the tsunami-damaged house behind the warehouse. It was demolished in late August.

In a place where many of their neighbors have lost everything, Masahiro Shoji said he&rsquo;s counting his blessings and working hard to help rebuild his shattered city.

&ldquo;Maybe in six months we can have a break,&rdquo; he said.