ISAF to add more than 2,000 troops in Afghanistan by September 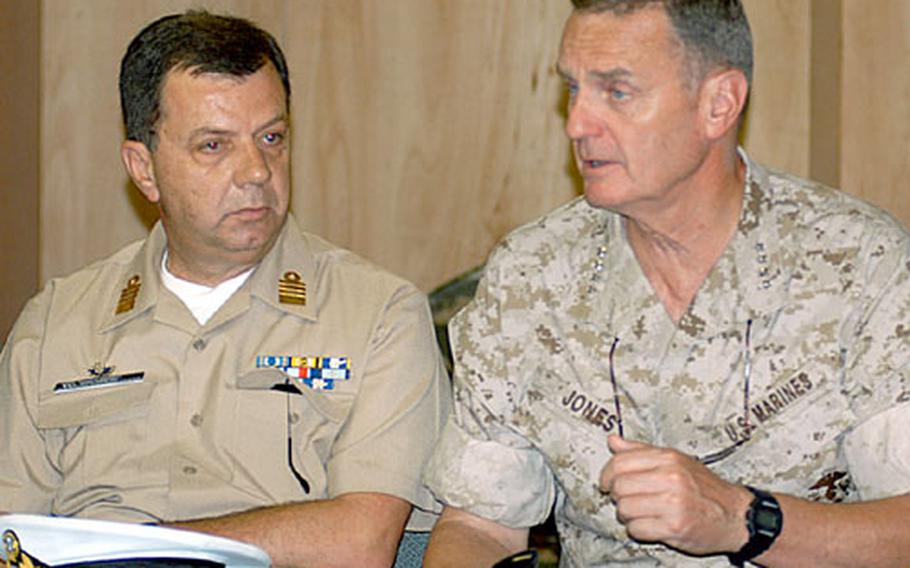 KANDAHAR, Afghanistan &#8212; More than 2,000 soldiers will be added to the International Security Assistance Force by September to provide security for legislative elections, bringing the total number of its troops in Afghanistan to about 11,000.

Included in those figures will be an additional company of U.S. soldiers, ISAF commander Turkish Lt. Gen. Ethem Erdagi said during a news conference at the Kandahar Airfield on Thursday.

ISAF is made up primarily of NATO forces and is expanding its mission, which was previously restricted to the Kabul area.

U.S. Marine Corps Gen. James L. Jones, NATO&#8217;s Supreme Allied Commander, also spoke during a short stop at the base by a handful of military and civilian officials. Jones also serves as head of the U.S. European Command based in Stuttgart, Germany.

NATO is working on expanding its role in Afghanistan, according to the ISAF Web site, and will eventually control about half of the country&#8217;s nearly 650,000 square miles.

But those successes are coming on concerns about both getting supplies to Afghanistan and a shortage of helicopter and C-130 cargo aircraft for ISAF. &#8220;It&#8217;s no secret,&#8221; Jones said about the shortage. &#8220;Countries are taking them back ... [but there is] a constant requirement.&#8221;

ISAF officials are working with countries to fix the shortage.

Jones said that a recent status of forces agreement with Russia may ease the movement of equipment and supplies between Europe and Afghanistan.

Both Jones and Erdagi said that despite some problems, ISAF is making progress in Afghanistan.

Attacks in areas under ISAF&#8217;s control, Erdagi said, are down 50 percent from 18 months ago.