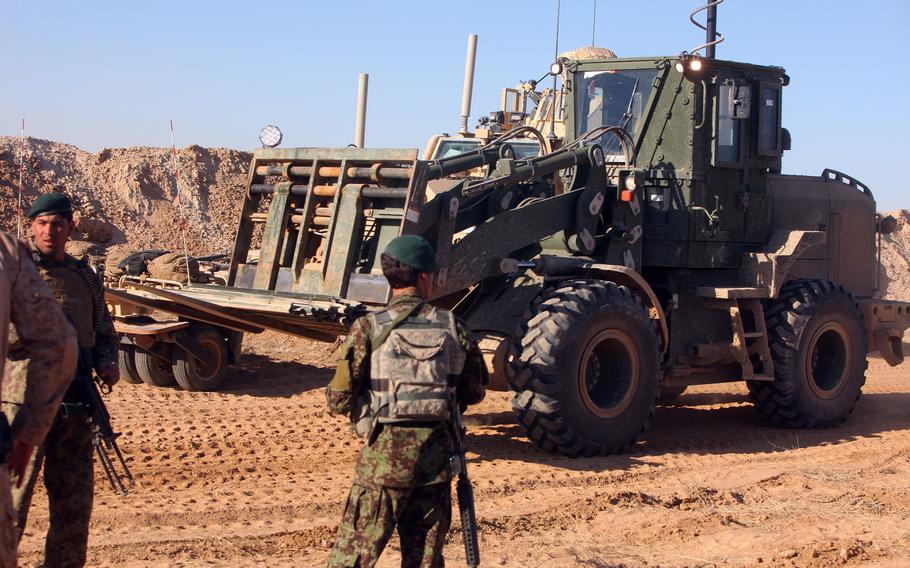 KABUL — International military planners say they are rethinking base construction plans for the Afghan security forces after a report by the Special Inspector General for Afghanistan Reconstruction warned that future needs remain unclear.

There are approximately $4.7 billion in construction projects for the Afghan National Security Forces underway or in the planning stages, but many of these may not be needed once the government’s army and police are reduced in size, a SIGAR report released on Friday concluded.

International and Afghan leaders have said they envision eventually reducing the number of security forces to 228,500, but that number is preliminary and might change based on conditions.

“Current construction requirements reflect the currently approved 352,000 ANSF personnel level and do not take into account planned reductions in the number of ANSF personnel,” SIGAR researchers wrote. “As a result, when the ANSF decreases to 228,500 personnel, ANSF facilities will have excess personnel capacity.”

The report’s authors estimated that works on as many as 52 projects will go beyond the December 2014 deadline, when the last of international combat troops are scheduled to leave. This will complicate efforts to control costs and maintain oversight, it said.

The document recommended that NATO and Afghan leaders develop a plan that would cut the number of planned projects or delay their construction until actual needs are more clearly defined. Additionally, the report recommended that current facilities be examined to see if they are underused.

Both ISAF and the multinational entity overseeing many of the projects, the Combined Security Transition Command — Afghanistan, concurred with SIGAR’s findings and said they are already taking steps to address potential concerns. CSTC-A officials also noted that housing Afghan forces in abandoned NATO facilities, which were not built for long-term use, may help prevent overproduction of lasting structures.

Recent SIGAR reports have been less well-received by the U.S. Agency for International Development and the State Department, which have pushed back against the majority of the watchdog’s recommendations.

SIGAR said transferring coalition bases to the Afghans has reduced the need for 318 new facilities, reducing costs by $2 billion in fiscal years 2011 and 2012.

Earlier this week, U.S. Forces – Afghanistan announced it was adjusting its $9.1 billion infrastructure program to try to better reflect the needs of Afghan forces.

“The long lead times in construction have not kept pace with the changing security environment and operational needs of Afghan and coalition forces,” USFOR-A officials said in a statement released on Tuesday. “As a result, USFOR-A acknowledges that the coalition has completed construction on a number of infrastructure projects that the Afghans are not fully using or occupying.”