ISAF: Level of air support for Afghan forces yet to be decided 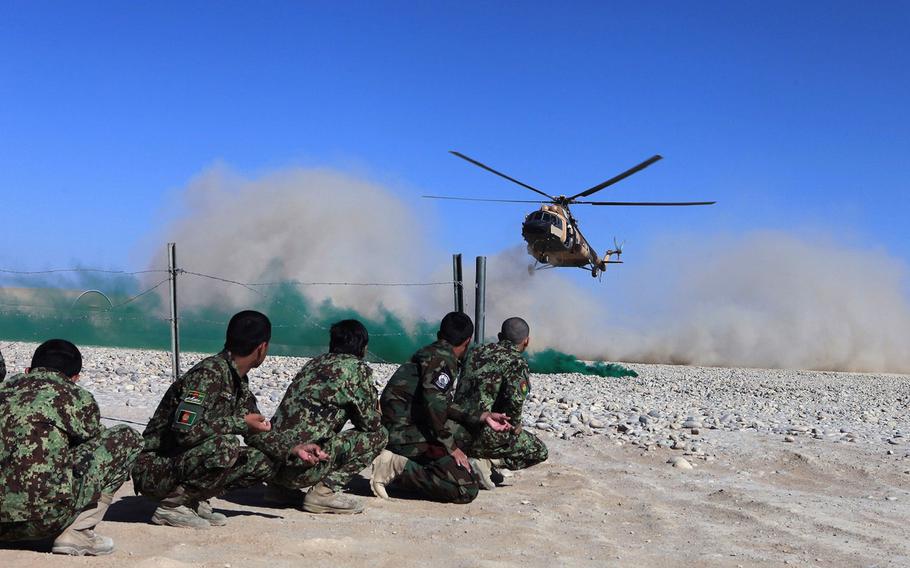 Students in the Afghan Tactical Air Coordinator course wait to board a Mi-17 helicopter during the culminating event aboard Camp Shorabak, Helmand province, Afghanistan, Oct. 2, 2014. The weeklong course was designed to familiarize the soldiers with map reading and coordinating with airborne pilots on friendly and enemy troop positions on the battlefield. (Cody Haas/U.S. Marine Corps)

KABUL, Afghanistan — The NATO coalition said on Monday that the main goal of the post-2014 mission in Afghanistan will remain training, advising, and assisting Afghan national security forces, despite discussions over possible continued air support.

“The focus for NATO and U.S. forces during Resolute Support will be to train, advise, and assist ANSF as agreed upon in the NATO Status of Forces Agreement and U.S. Security Defense and Cooperation Agreement,” ISAF spokesman Lt. Col. Chris Belcher told Stars and Stripes. “The exact levels of aviation support beyond train, advise and assist are still under discussion.”

On Sunday, officials with NATO’s International Security Assistance Force as well as the Afghan Ministry of Defense told Stars and Stripes that coalition air forces could still provide some form of air support if requested by Afghan forces. The Afghan air force has grown and is carrying out regular missions, but is still several years away from being able to fully operate on its own, according to Afghan defense officials.

NATO leaders have emphasized that the coalition’s official combat role in Afghanistan would end in December. Afghan forces have taken increasingly heavy casualties as they took the lead in fighting a stubborn insurgency, and both Western and Afghan officials have called for a continued international aid.