Is the Osprey safe? Depends on which stats are used 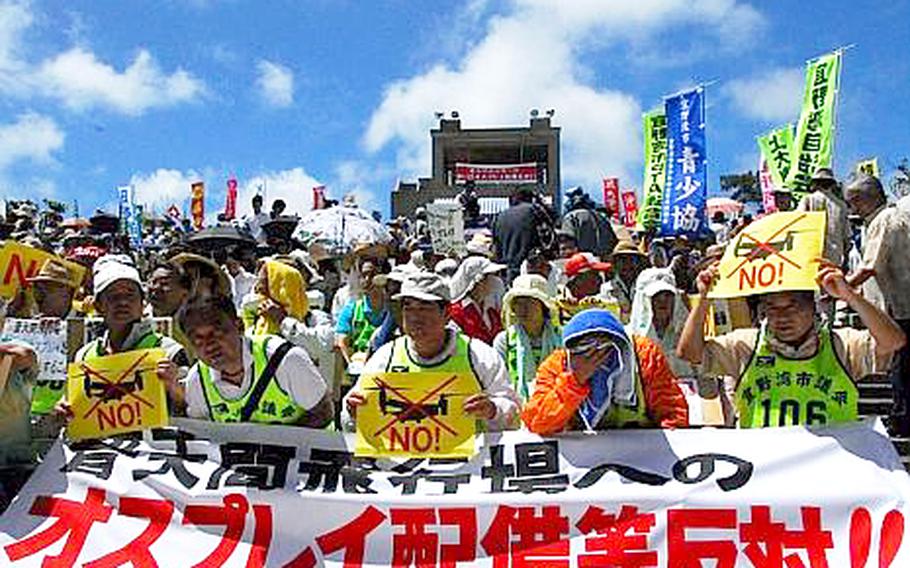 Buy Photo
Thousands of Okinawans gathered June 17 to protest the planned deployment of the Marine Corps Osprey aircraft to the island later this year. (Travis J. Tritten/Stars and Stripes)

Buy Photo
Thousands of Okinawans gathered June 17 to protest the planned deployment of the Marine Corps Osprey aircraft to the island later this year. (Travis J. Tritten/Stars and Stripes) 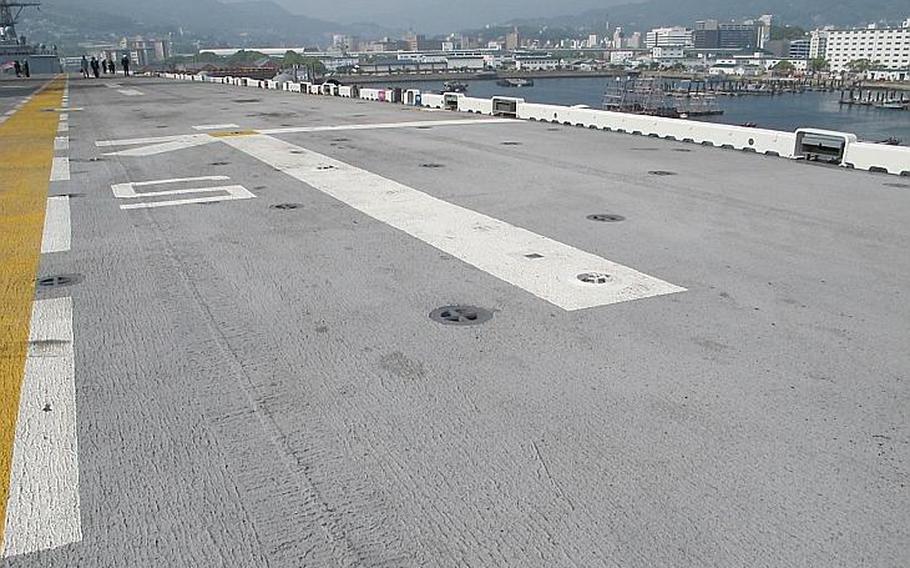 Buy Photo
Osprey aircraft could soon be parked on spots like this on the amphibious assault ship USS Bonhomme Richard, which was retrofitted to facilitate their move to the Pacific, seen here at Sasebo Naval Base. (Matthew M. Burke/Stars and Stripes)

SASEBO NAVAL BASE, Japan &mdash; The U.S. Defense Department says the MV-22B Osprey is safe. Residents of Okinawa, where 24 of the tilt-rotor aircraft are to be deployed soon, strongly disagree, with the prefectural governor threatening a movement to close all U.S. military bases on the Japanese island if their concerns are not addressed.

Who is right or wrong might not be so black and white. It all depends on which statistics are used to assess the safety record of the helicopter-plane hybrid that has been combat tested in Iraq and Afghanistan. The key is whether recent high-profile crashes are included in the safety calculations, and if those calculations are even valid.

The Japanese government released a Marine Corps environmental review of the Osprey&rsquo;s proposed deployment on June 14, a day after the U.S. Air Force reported that one of its Ospreys flipped over on a Florida base, injuring the crew. Safety statistics in the report indicated that the aircraft are slightly safer than the aging CH-46E Sea Knights, which the Ospreys are replacing.

That was true until a deadly Osprey crash in Morocco in April claimed the lives of two Marines and inflamed Japanese concerns over the aircraft&rsquo;s safety. But that crash was not factored into the Marine Corps environmental review released by the Japanese government, because the Corps had finalized the report prior to the crash.

Factor in those two additional crashes, and on paper, statistics would indicate that the Osprey is less safe than the Sea Knight. Updated statistics that include the Morocco crash were provided to Japanese officials in an addendum to the environmental review, Japanese government and Marine Corps officials said.

But the Marine Corps says those figures aren&rsquo;t as bad as they appear.

The safety figures are based on the number of Class A mishaps per 100,000 flight hours. Class A mishaps involve repair costs for the aircraft or government property exceeding $2 million or the death or permanent disability of a servicemember.

In the review given to the Japanese government, the Osprey was listed as having a slightly better safety record than the Vietnam-era Sea Knights &mdash; 1.12 Class A mishaps per 100,000 flight hours, compared with 1.14 for the Sea Knight.

Responding to a Stars and Stripes query, Marine Corps headquarters released the updated set of statistics that included the Morocco crash. As a result, the Osprey mishap rating almost doubled, to 1.93 Class A mishaps per 100,000 flight hours.

Ulsh said that the Osprey has proved itself in continuous combat missions over the past five years, and that the safety numbers are overly skewed by the crash in Morocco.

&ldquo;In five years of operational flight, the MV-22 has only had two Class A mishaps; the most recent one taking place in Morocco in April of this year,&rdquo; Ulsh said. &ldquo;Given the fact that the past five years include continuous combat missions in Iraq and Afghanistan, this relatively low number of mishaps is considered a testament to the aircraft&rsquo;s safety and survivability.&rdquo;

Richard Whittle, former Washington and Pentagon correspondent for The Dallas Morning News and author of &ldquo;The Dream Machine: The Untold History of the Notorious V-22 Osprey,&rdquo; said the Osprey has a bad reputation due to the crash record of the pre-2001 version of the aircraft, which was &ldquo;designed, prototyped and tested with inadequate funds because of the politics of defense acquisition.&rdquo;

Whittle, who covered the Osprey off and on for 22 years, said that ensuing crashes marred the Osprey&rsquo;s reputation. It was later redesigned and retested, but the damage was already done.

&ldquo;Judged by Class A mishaps per 100,000 flight hours, the Sea Knight has a slightly better statistical average than the Osprey at the moment, but that&rsquo;s because the CH-46 has been flying since Elvis Presley was King,&rdquo; Whittle said. &ldquo;Many more Sea Knights than Ospreys have crashed over the years &hellip; Today, there is no safer rotorcraft being flown by the U.S. military, in my view.&rdquo;

Yet Okinawans, spooked by the recent crashes, strongly object to the planned deployment. The prefectural government and various cities on the island have passed resolutions opposing the Osprey deployment. About 5,000 Okinawans showed up at a protest rally last month in Ginowan City, home to the long-embattled Marine Corps Air Station Futenma, which is to house the Ospreys.

The local opposition is animated by still-sharp memories of the 2004 crash of a Sea Stallion helicopter on the campus of Okinawa International University, which sits adjacent to Futenma.

In that incident, the Sea Stallion&rsquo;s tail rotor and a section of the tail rotor pylon detached from the aircraft. The rotor blades struck the university and the helicopter crashed and burst into flames. No civilians were hurt and the crew survived the crash, which was blamed on shoddy maintenance, but it prompted impassioned protests calling for the closure of Futenma, located in the middle of a densely-populated urban area.

The charred walls of a building struck by the helicopter were left standing in the middle of the university campus, as both a memorial and constant reminder of the crash.

&ldquo;While it has long been said that Ospreys are defective aircraft, recent crashes like the one in Morocco and in Florida once again proved it,&rdquo; said Seishin Hanasaki, 73, who attended the rally with his wife and neighbors.

&ldquo;It&rsquo;s very scary to think that such an accident-prone airplane will fly over our skies,&rdquo; said his wife, Hatsuyo Hanasaki, 70.

Atsushi Sakima, mayor of Ginowan and an organizer of the event, agreed.

&ldquo;To protect the lives and property of citizens, I call for immediate cancellation of the deployment of Osprey to Okinawa,&rdquo; he told the rally.

&ldquo;We are yet to be convinced of the safety of the aircraft,&rdquo; Nakaima said during the half-hour meeting.

Morimoto stopped short of discussing the government&rsquo;s stance on the Osprey.

&ldquo;What is clear is that the United States is continuing flight operations of the aircraft despite the accidents,&rdquo; he said, adding Japan would reserve opinions until final reports on the crashes are released. &ldquo;We are not in a situation at this moment to make any decision.&rdquo;

Morimoto was on a two-day tour of Okinawa and Yamaguchi, host community of Marine Corps Air Station Iwakuni, where the aircraft will originally land in late July for system checks before moving on to Futenma.

Yamaguchi Gov. Sekinari Nii has expressed opposition to the deployment plans, as has Mayor Yoshihiko Fukuda of Iwakuni, where the Ospreys would fly two or three times a month to refuel.

There are also concerns in Sasebo, home to Sasebo Naval Base and ships of the U.S. Navy&rsquo;s 7th Fleet. The amphibious assault ship USS Bonhomme Richard deployed there recently with upgrades to carry the Osprey.

Officials in Iwakuni said the Japanese government will not be able to proceed without public support.

The U.S. government announced two weeks ago that in recognition of Japanese safety concerns, the Ospreys will be grounded until the final crash investigations are provided to Japan. The Japanese Ministry of Defense has said it will set up a team to independently evaluate the Ospreys&rsquo; safety.

&ldquo;If the deployment takes place by brushing aside concerned voices of the people of Okinawa, it will inevitably lead to a prefectural-wide movement to demand immediate closure of all the military bases on the island,&rdquo; Nakaima said.

Ulsh said the Sea Knights are old and must be replaced. The Department of Defense has touted the Ospreys&rsquo; versatility, which includes the humanitarian arena. But the Japanese must live with the aircraft. And it isn&rsquo;t just an Okinawan issue. Their increased range allows for more flights over mainland Japan, Ulsh said. He is confident the Osprey will serve safely, but he says there are no alternatives to the planned deployment.

&ldquo;There isn&rsquo;t another answer,&rdquo; he said. &ldquo;It&rsquo;s important for us to have the Okinawan people think this is a safe aircraft.&rdquo;

Stars and Stripes reporters Chiyomi Sumida and Hana Kusumoto contributed to this report.