Is South Korea ready to take over control of troops on peninsula? 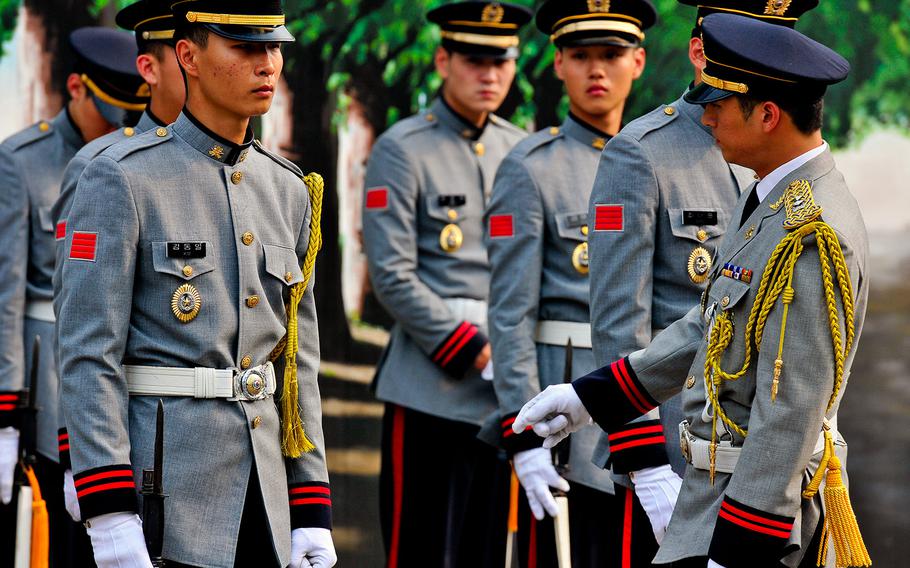 A soldier of the Third Republic of Korea Army is inspected before the beginning of the Operation Control Ceremony prior to the start of Ulchi Freedom Guardian 2014 exercise at Camp Yongin, South Korea, on Aug. 22, 2014. (Daniel Schroeder/Defense Department)

SEOUL, South Korea — Almost a decade ago, OPCON was heralded as a symbol of South Korea’s rise from a poor, war-torn nation into an economic power capable of defending itself.

But a string of North Korean provocations — deadly attacks along the disputed maritime border, rocket launches, increasingly powerful nuclear tests — has Seoul wondering whether it’s ready to lead 600,000-plus U.S. and South Korean troops if war were to break out.

South Korea maintains control of its own forces during peacetime. That responsibility, known as OPCON, or operational control, would transfer during open conflict to the top U.S. military official on the peninsula, where some 28,500 American troops are stationed as a deterrent to a North invasion.

Although wartime OPCON is scheduled to transfer to Seoul in December 2015, the two allies now are expected to delay the handover for a third time — a prospect that has some current and former South Korean defense officials breathing a sigh of relief.

“If the North Korean threats disappear now, it would be possible to take over wartime OPCON next year,” said Park Songkuk, a retired lieutenant general and former superintendent of South Korea’s Air Force Academy. “Until North Korea’s ability to threaten us with its nuclear program is gone, I don’t think it’s time for us to get OPCON.”

Some think the switch will leave South Korea more vulnerable to attacks by the North, but others feel Seoul is ready for the responsibility.

“I think the South Koreans have a lack of confidence in their own capabilities, and they shouldn’t,” said Brad Glosserman, executive director of the Pacific Forum CSIS in Honolulu. “They’re very good at what they do.”

The transfer originally was planned for 2007 but was delayed to 2012. It was then pushed forward to 2015 amid questions about the South’s readiness for the job following the North’s attacks on South Korea’s Cheonan warship and an artillery attack on the civilian-populated Yeonpyeong border island in 2010.

Analysts say that with Washington and Seoul comfortable with the current arrangement, it’s a near-given that another delay is coming. South Korean media have speculated the transfer might be pushed back to 2020 or later. A spokesman for South Korea’s Ministry of National Defense would not give a target date but said South Korea will “be faithful” in readying itself.

The U.S. has said little about the timing of a possible delay, though Deputy Secretary of Defense Robert Work said last month that Washington is “working very closely with (South Korea) in terms of changing operational control of forces over time and also linking our capabilities closer together.”

A key concern is how the transfer — or its delay — will be perceived by the North, which may view South Korean-led combined forces as more vulnerable to attack.

Most of North Korea’s approximately 1 million troops are stationed within 90 miles of the Demilitarized Zone, posing a significant threat to Seoul, some 35 miles south. While Pyongyang’s outdated conventional capabilities are declining, it is focusing on developing other capabilities, from ballistic missiles to cyber warfare.

Daniel Pinkston of the International Crisis Group said the South is capable of assuming OPCON, but letting the U.S. retain wartime command for now could prevent lower-level skirmishes from escalating into larger conflict.

“The U.S. has more restraint. Some little skirmish or naval battle at the Northern Limit Line – does the U.S. want a full-scale war over that? No,” he said. “With the South Koreans in the driver’s seat, the threat of retaliation for things like Yeonpyeong-do or the Cheonan is more credible.”

South Korean military leaders were heavily criticized for not responding more quickly and forcefully to the attacks, and the government has vowed a stronger reaction to future provocations.

Pinkston predicted an attitude shift within the country as a younger generation of military officers — who don’t remember the Korean War and feel more confident than their elders in the country’s ability to defend itself — progress in their careers.

Park, part of a group of top retired South Korean generals, said the two countries should work toward an eventual transfer but without imposing a deadline.

“It’s not time to insist on doing this because of our pride,” he said.

The two allies began seriously discussing the transfer in 2005, against a backdrop of swelling anti-Americanism and a tense political relationship between then-presidents Roh Moo-hyun and George Bush and a U.S. military strained by two wars in the Middle East.

At the time, wartime OPCON was framed as a matter of the country asserting its sovereignty, with then-U.S. Secretary of Defense Donald Rumsfeld arguing that the South should take more responsibility for its own defense more than five decades after the end of the war.

Seoul handed over control of its forces to the U.S.-led U.N. Command in 1960, then took back peacetime control in 1994.

Today, even top military officials familiar with the Korean peninsula disagree about when the transfer should occur. Ret. Gen. B.B. Bell, who commanded U.S. forces on the peninsula for 2 1/2 years before retiring in 2008, was one of the most vocal defenders of wartime OPCON transfer, saying it had become unnecessary and inappropriate for a U.S. commander to lead the Korean military in wartime.

He has changed his stance, arguing in an April 2013 letter published by South Korean media that, while the South’s military is superior to the North’s, the allies must “permanently postpone” the transfer as long as North Korea has nuclear weapons.

At a Heritage Foundation forum last week in Washington, Bell said North Korea’s third nuclear test last year was a “game changer” that demonstrated the failure of negotiations and shifted the balance of power within the region.

Until the North’s nuclear program is dismantled, he said the U.S. — as the only nuclear power in the South Korean-U.S. alliance — has a clear responsibility to lead a war readiness effort.

His successor, Gen. Walter Sharp, has countered that a delay would be indefinite and unnecessary. In a paper published last December by the Center for Strategic and International Studies, Sharp, who retired in 2011, said the South Korean military is “professional, modern and trained,” and fully capable of defending the nation.

Sharp recommended transferring wartime OPCON as planned in 2015, but, instead of creating separate commands, maintaining a combined senior command structure that would be led by a South Korean.

Doing so would encourage Seoul to spend more on its own defense, he wrote, and signal to the North that the U.S. has confidence in the strength of the South Korean military.

“Why else would the U.S. agree to put troops under ROK command?” he said.

The scheduled transfer has tapped into South Korean fears that the U.S. might abandon or lessen its military commitment to the peninsula, despite Washington’s reassurances that it has no plans to do so.

Critics have complained that Seoul, knowing Washington won’t force the transfer, hasn’t spent the money on upgrades to its military that would make it capable of leading a warfight.

Seoul’s reluctance to approve an updated cost-sharing agreement on the expenses of stationing U.S. forces on the peninsula led to complaints that it wasn’t paying a fair share in defending the country. Denny Roy, a senior fellow at the East-West Center in Honolulu, said most analysts say South Korea isn’t ready to accept responsibility for the transfer, and there would be a dropoff in capability if it takes place next year. Critics worry that South Korea does not yet have the advanced intelligence, surveillance, missile defense and other capabilities it would need to seamlessly interoperate with and lead a warfight with the U.S.

Roy also said a delay would be viewed negatively by some politicians in Washington ”as a reinforcement of their idea that South Koreans are not eager to rectify an over-reliance on the U.S. military.”