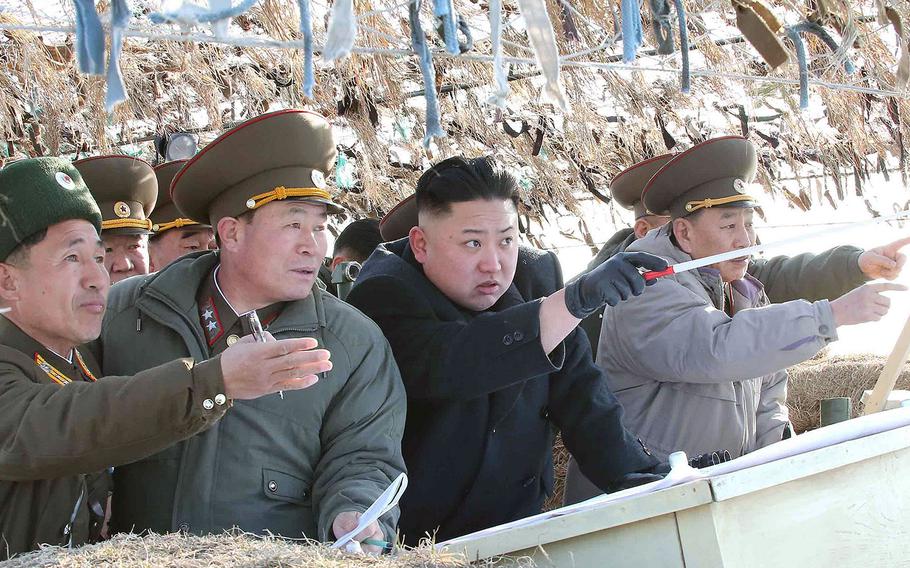 North Korea leader Kim Jong Un visits the Wolnae-do Defence Detachment on the western front line, according to KCNA news agency which released this image on March 12, 2013. Kim executed one of his army generals in January 2015, according to a South Korean official in Seoul. (KCNA/Xinhua/Zuma Press/MCT)

SEOUL, South Korea — Famine and economic depression haven’t been enough in the last seven years to bring North Korea back to the negotiating table over its weapons program — not as long as its military has enough resources to keep the Kim dynasty in power.

North Korea sees any threat to “songun” — the reclusive communist country’s military-first system — as making the nation vulnerable to invasion. To outside observers, destabilization of the powerful military threatens the Kim family regime’s hold on power.

Explaining North Korea’s reasoning for entering those negotiations remains open to debate, but many analysts believe the regime feared losing its military’s support. The military is believed to have gotten the lion’s share of both the outside aid and the national budget, though that may not have been enough in such a poverty-wracked country.

“Military spending has always been prioritized, even during periods of mass starvation,” according to a 2014 U.N. report on North Korea. “Nevertheless, the State still failed to feed the ordinary soldiers of its disproportionately large army.”

Today, North Korea faces the prospect of another significant food shortage and a purported loss of income from China, its largest trading partner and closest among precious few allies.

But are things so bad right now that Pyongyang will be willing to discuss its nuclear weapons program?

Kang is skeptical that North Korea is serious about negotiations, or that any agreements would stand — a valid concern, given how previous deals have fallen apart as Pyongyang repeatedly reneged on key points in the past.

North Korea knows China is concerned that a unified Korea would mean U.S. troops closer to its border, and Pyongyang uses that concern to determine its own actions, Kang said.

Nevertheless, China certainly has influence over Pyongyang. It purchases 84 percent of North Korea’s exports, with coal and iron ore accounting for about half of that, according to the Massachusetts Institute of Technology’s Observatory of Economic Complexity.

Although some reports indicate that China’s imports of North Korean coal and natural resources are falling, it’s unclear if that could create enough economic hardship for North Korea to return to the negotiating table.

Even if China’s coal purchases are shrinking, an estimated 20,000 North Koreans working overseas are bringing the regime hard currency, Kang said. The regime has also profited for years from institutional currency counterfeiting and drug production, according to U.S. government reports.

Paik Haksoon, a senior researcher at the Sejong Institute, even doubts the accuracy of reports of China cutting its North Korean resource purchases. He also cites increased economic activity in three Chinese provinces near North Korea’s northern border — a border in name only for Chinese businessmen willing to cut Pyongyang into their profits.

China has joined Japan and the United States in criticizing North Korea’s nuclear program, but it is willing to let denuclearization drag out for years in negotiations, according to Paik.

“China has been using the denuclealization of North Korea as a mechanism to control the North,” he said.

Paik and Kang remain skeptical that talks at this point would accomplish much; Pyongyang agreed to abandon its nuclear program in 2007 after much negotiation, only to resume testing two years later.

However, it does appear that China and the other members of the “six-party talks,” a group of countries that negotiated several now-tattered accords in the 2000s, are ready to talk to North Korea once again.

The Chinese Foreign Ministry recently posted a photo of Russia’s deputy foreign minister and China’s representative for Korean affairs with the following caption: “The two sides exchanged views on the situation on the Korean Peninsula, and on the restarting of the six-party talks.”

China has not provided details on what those views entail.

South Korea, Japan, the U.S., China and Russia have reached “a certain degree of consensus” on how to restart the talks that fell apart in 2008, said Hwang Joon-kook, South Korea’s ambassador to the talks — again without providing details, according to Reuters.

Meanwhile, North Korea has been firing offshore ballistic missiles while threatening America with “final doom” in its news releases. In addition to the direct threat of attack, U.S. officials worry that Pyongyang could be willing to sell weapons and missiles to other enemies of America, including terrorists.

Still, The Washington Post and others have reported that U.S. and North Korean officials had been having “talks about talks.” That would mark something of a turnaround for President Barack Obama’s policy of “strategic patience,” which has fundamentally meant no engagement with North Korea.

Former U.S. Ambassador to the U.N. Bill Richardson believes there is value in talking with North Korea, he told Foreign Policy recently during an interview.

There are some areas of compromise available on human rights and family exchanges because North Korea wants access to aid and technology, he said.

Richardson, who has visited the country several times, nevertheless reflected skepticism of any quick breakthroughs.

“Their idea of a concession was they’re not going to budge, but what they will budge on is they will give you enough time to come to their conclusion, eventually.” Richardson said. “Time for them is not of the essence.”

Stars and Stripes reporter Yookyong Chang contributed to this report.