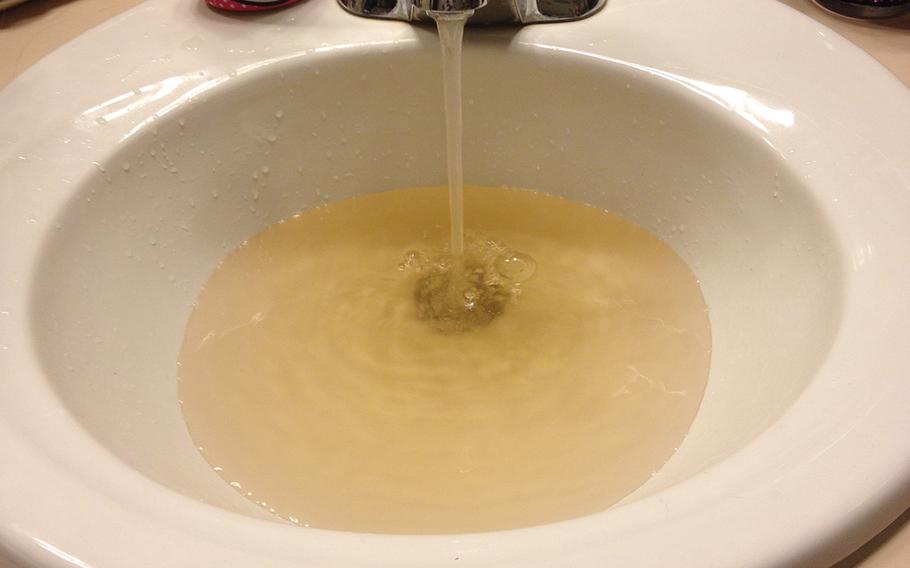 Water from the tap at a Fort Polk home, in an April photo send by a resident who asked to remain anonymous. Fort Polk officials have maintained that the water is safe to drink, despite the fact that high levels of lead and copper have been found in some of the homes on base. (Courtesy to Stars and Stripes)

Water from the tap at a Fort Polk home, in an April photo send by a resident who asked to remain anonymous. Fort Polk officials have maintained that the water is safe to drink, despite the fact that high levels of lead and copper have been found in some of the homes on base. (Courtesy to Stars and Stripes) 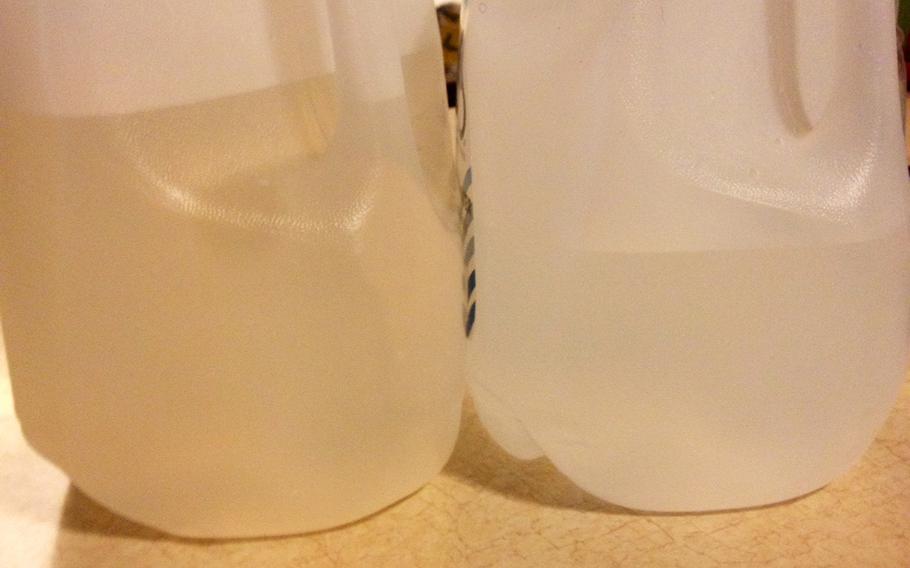 This photo, taken at a Fort Polk home in April by a resident who asked to remain anonymous, shows the tap water discoloration, compared to bottled water on the right. Fort Polk officials have maintained that the water is safe to drink, despite the fact that high levels of lead and copper have been found in some of the homes on base. (Courtesy to Stars and Stripes)

WASHINGTON — Despite reassurances from officials at Fort Polk, Louisiana, that the water is safe, a number of toxicology and health experts say residents could be at risk from lead exposure.

Tests have shown concentrations in residential tap water that ranged up to 36 parts per billion, more than twice the “action level” for lead set by the Environmental Protection Agency that triggers further investigation and possible remediation.

The EPA’s acceptable level for lead, a neurotoxin that causes worsening effects as it accumulates in body and can disrupt development in young children, is 0 ppb in water.

In all, 20 percent of houses randomly selected last summer for heavy metals monitoring had unacceptable lead levels, forcing the installation and the private company that manages the water system to implement a more stringent testing regime.

In the most recent testing early this year, less than 10 percent of monitored homes, or 3 out of 40, had problem lead levels. As a result, although it’s unclear why lead levels apparently dropped, no further testing for lead and copper is required until 2016, officials say. There are plans in the works to add a chemical to the water system to stop lead from leaching into pipes late this year, but the proposal is being reviewed Louisiana state regulators.

Lead levels observed in Fort Polk water are too low to cause obvious poisoning or acute symptoms, experts said. By contrast, tests in the nation’s capital in recent years have shown lead levels more than 100 times higher than the maximum values recorded at Fort Polk.

But residents on the section of Fort Polk where lead was found should still think twice before drinking the tap water, experts said. Recent studies indicate that even low exposures of the sort found in the most recent tests at Fort Polk are subtly damaging — particularly in children — an authority on lead poisoning told Stars and Stripes.

“Even at these low levels, we can see evidence of lead toxicity that might look like conduct disorder, ADHD, or a learning problem,” said Dr. Bruce Lanphear, a professor in the health science faculty at Simon Fraser University in Burnaby, British Columbia.

That’s not the message residents of Fort Polk have received.

Instead, in community forums and messages from commanders, residents were told that the water on base posed no health concerns at all.

Fort Polk Directorate of Public Works personnel “emphasize that Fort Polk’s water is safe to drink. If it were not, they’d be shut down immediately by EPA and [Louisiana Department of Health and Hospitals,]” according to a summary of a town hall meeting last December posted on Facebook by the Fort Polk Guardian, a command-directed newspaper.

The article also repeated claims by the private water system operator that what was discovered in tests for lead and copper on base was “NOT a contaminated or unsafe level.”

And in an email to Stars and Stripes, a Fort Polk spokeswoman wrote: “It is the Fort Polk command’s position that the water in family housing is safe to drink … The rigorous testing conducted here and our communications to the community about that testing are designed to leave no doubt as to the safety of the water.”

The issue arose last July, after state-mandated random tests of 20 residences in the North Fort Polk Housing area, where over 3,500 troops and family members are served by a self-contained water system. Tests turned up enough lead in tap water at four of the houses that the base and the private operator of the Fort Polk water system, American Water, had to expand the testing.

The July tests were the first time lead had been found in tap water at Fort Polk, base officials say.

Aside from specific concerns about lead and copper, many people who live on the base have complained on social media about the look and smell of the water coming out of their faucets.

A resident provided Stars and Stripes several photos of discolored water coming from taps at home. Another resident said that their clothes have even been stained brown by the water in their washing machine.

Last year, a video was posted on Facebook showing brown water coming out of a shower at an Army barracks at Fort Polk. Water lines in two barracks were flushed and cleaned after officials saw the footage on social media.

Subsequent tests of 40 houses in October found no houses with lead levels that exceed the EPA action level of 15 parts per billion, and tests in February of this year found only three of the houses surpassed the level. Because fewer than 10 percent of residences were found to have lead and copper concentrations above the action level, state and federal agencies no longer require an enhanced testing schedule.

Of the 149 water delivery points tested, 101 were water fountains and 48 were food preparation areas. Lead concentration levels exceeding EPA action levels by more than 30 percent were found in 11 devices in those buildings. Those 11 devices were immediately taken out of service, according to the Fort Polk Directorate of Public Works.

Although further remedial or cleanup actions are not required by law, American Water is taking several steps to try to ensure action levels aren’t surpassed again. They include more frequent flushing of the system to clear stagnant water and a plan to add a chemical treatment widely used in to prevent corrosion and leaching of lead into water.

“We’re not required to do this whatsoever — we’re just taking a proactive approach to ensure we don’t have these action levels in the future,” said Joe Tackett, regional manager for American Water.

In addition, base officials have recommended running water for several minutes before using it to clear out stagnant water, which has time to build up a higher concentration of lead as it sits in pipes.

Not all residents are reassured, however, and some families are paying for bottled water rather than risk using tap water. The family of one resident who requested anonymity out of fear of retaliation pays about $80 a month for bottled water for drinking and cooking.

Avoiding water at or above the action level for lead is a good idea, the Environmental Protection Agency said in an emailed statement to Stars and Stripes.

“Lead can cause a variety of adverse health effects when people are exposed to it at levels above the action level for relatively short periods of time,” the agency said. “These effects may include interference with red blood cell chemistry, delays in normal physical and mental development in babies and young children, slight deficits in the attention span, hearing, and learning abilities of children, and slight increases in the blood pressure of some adults.”

Although no law requires it, Fort Polk and state health officials should consider implementing a blood-lead monitoring program to ensure water is as safe as claimed by officials, said Deborah Cory-Slechta, professor of environmental medicine and pediatrics at the University of Rochester Medical Center.

“I’m a little astounded by their message, because if you don’t know the [blood-lead concentration], I don’t know how you can say it’s safe,” said Cory-Slechta, who sat on a Centers for Disease Control committee that in 2012 declared that very small quantities of lead in children’s bodies could cause harm.

The 15 ppb action level was set decades ago, she said. But as science had demonstrated that ever-lower levels lead have an effect, she said, policies and laws governing lead pollution in water have not kept up.

“We can’t seem to find a point, a blood-lead concentration, that’s without effect,” she said. “And it’s also not that clear any more that adults are safe at low levels either.”

“These levels are not alarmingly high,” he said.

But science doesn’t support base official’s contention there is no health risk, he said.

“It’s hard to make an overall comment like that, because for some children who are exposed to lead in paint or other sources, the amount in the water may be enough to put them into a range where there would be demonstrable adverse effects,” he said.

Even as they work to rectify the issue, Lanphear said Fort Polk and water company officials should be more careful how they communicate public health issues with residents.

“No, it’s not safe, not by any stretch,” he said. “If the levels in my home were 15 or 16 parts per billion I would stop using the tap water until I got a filter or the problem was rectified.”