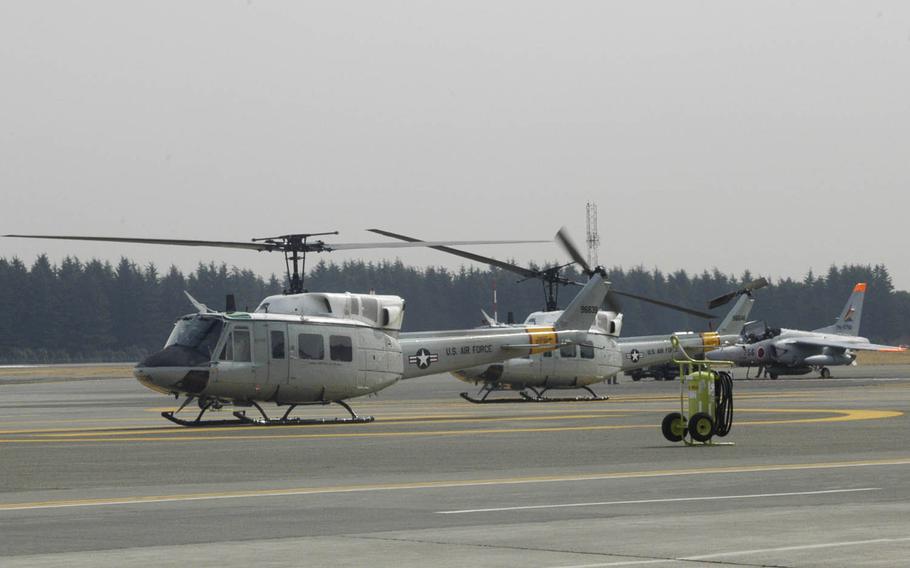 Buy Photo
UH-1 Iroquois helicopters are seen at Yokota Air Base, Japan, Monday, Feb. 29, 2016. A UH-1 assigned to Yokota with nine people onboard made an emergency landing at a Japanese civilian airport that morning. Yokota officials did not provide information about what forced the aircraft down. (Seth Robson/Stars and Stripes)

YOKOTA AIR BASE, Japan — An Air Force helicopter made an emergency landing Monday morning at a Tokyo airport.

The Bell UH-1 Iroquois, assigned to the 459th Airlift Squadron at Yokota Air Base, was on a routine local flight when it made a precautionary landing at 7:44 a.m. at Chofu Airport, said Master Sgt. Chris Marasky, a Yokota spokesman.

“The aircraft landed safely without incident,” he said.

The helicopter landed at the airfield after an engine warning light activated in the cockpit, Marasky said in an email response.

“Precautionary landings such as this are a measure to ensure safetly of flight operations and are expected to occur infrequently,” Marasky said.

A second helicopter was dispatched to Chofu to retrieve the nine people on board the first chopper.

“Once maintenance issues are resolved, the (Iroquois) will depart Chofu to return to Yokota,” Marasky said.

Col. Douglas C. DeLaMater, 374th Airlift Wing commander, said last month that four UH-1s operating out of Yokota were recently upgraded with new hoists, allowing them to rescue people from places where aircraft can’t land. The gear was added to make the helicopters interoperable with Japanese military helicopters, he said.

Last July, a light plane crashed into nearby homes shortly after take-off at Chofu, killing the pilot and two passengers.