'Iron Soldiers' are back in Baumholder 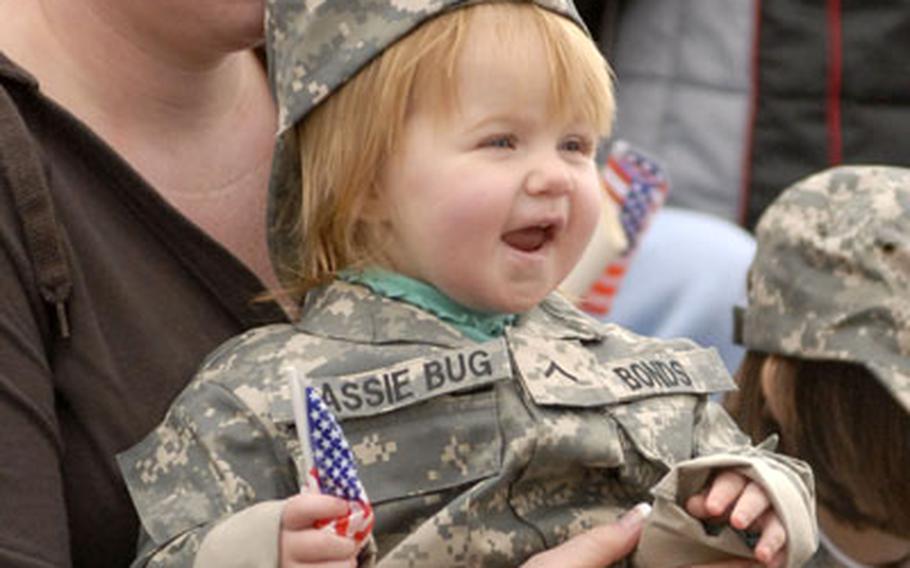 Jessica Bonds, along with her daughters Kassie and Katie (partially hidden at right), watch the 2nd Brigade Combat Team in formation during the welcome home ceremony in Baumholder. Jessica’s husband, Pfc. Jaysson Bond, is assigned to the Brigade Reconnaissance Group. (Ben Bloker / S&S)

Jessica Bonds, along with her daughters Kassie and Katie (partially hidden at right), watch the 2nd Brigade Combat Team in formation during the welcome home ceremony in Baumholder. Jessica’s husband, Pfc. Jaysson Bond, is assigned to the Brigade Reconnaissance Group. (Ben Bloker / S&S) 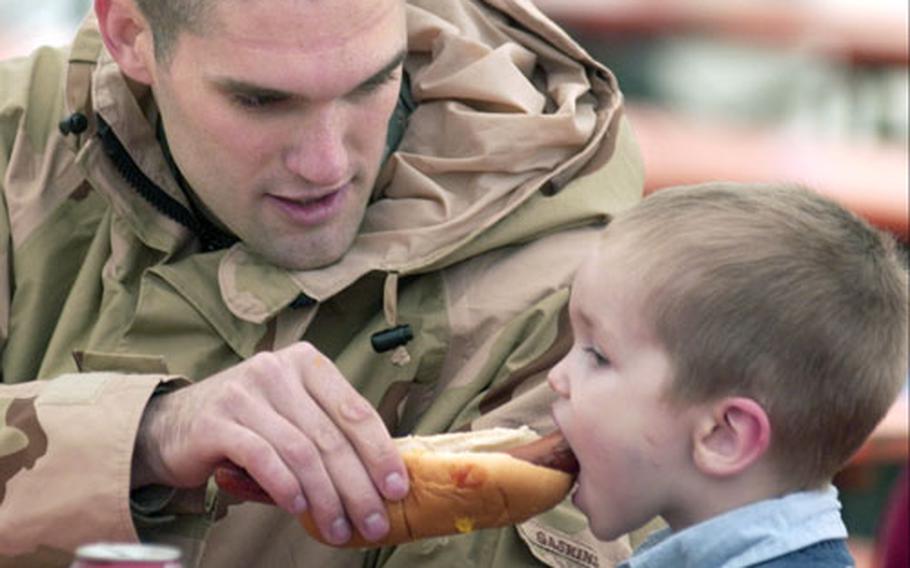 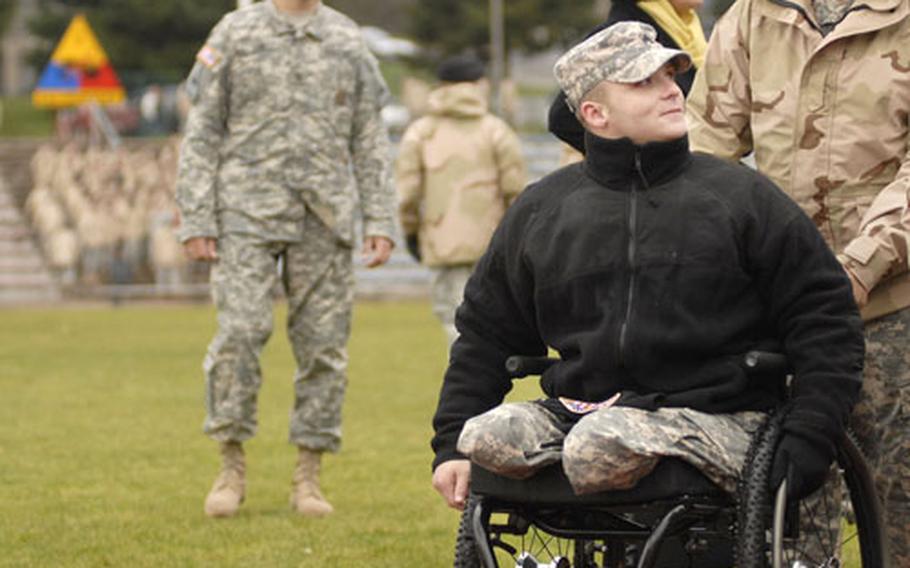 Sgt. Chad Rozanski reunites with his comrades at the 2nd Brigade Combat Team welcome home ceremony Wednesday in Baumholder, Germany. Rozanski lost his legs to a roadside blast while serving with the 1st Battalion, 35th Armor Regiment in Iraq. Members of Rozanski’s unit, along with soldiers from the 4th Battalion, 27th Field Artillery Regiment, took up a collection so that he could fly from Brooke Army Medical Center in Texas for the event. (Ben Bloker / S&S) 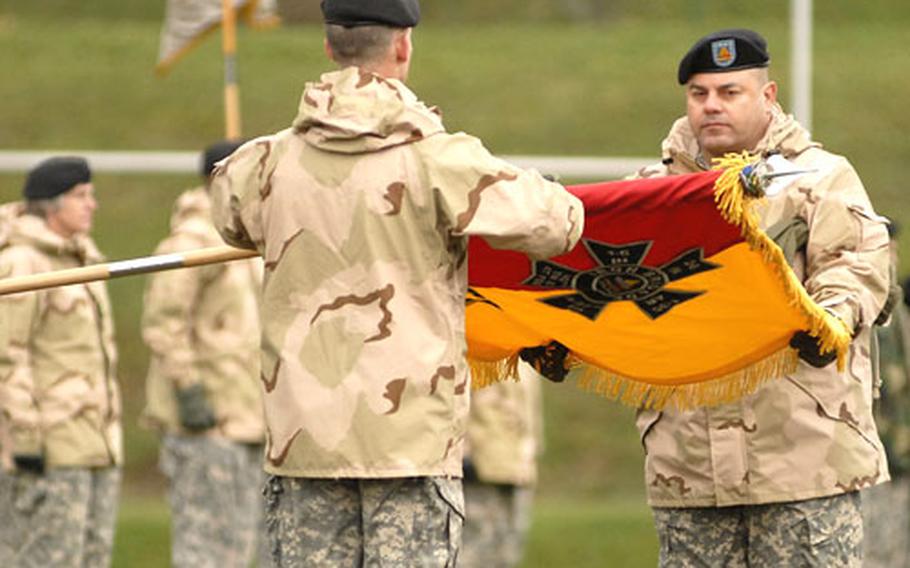 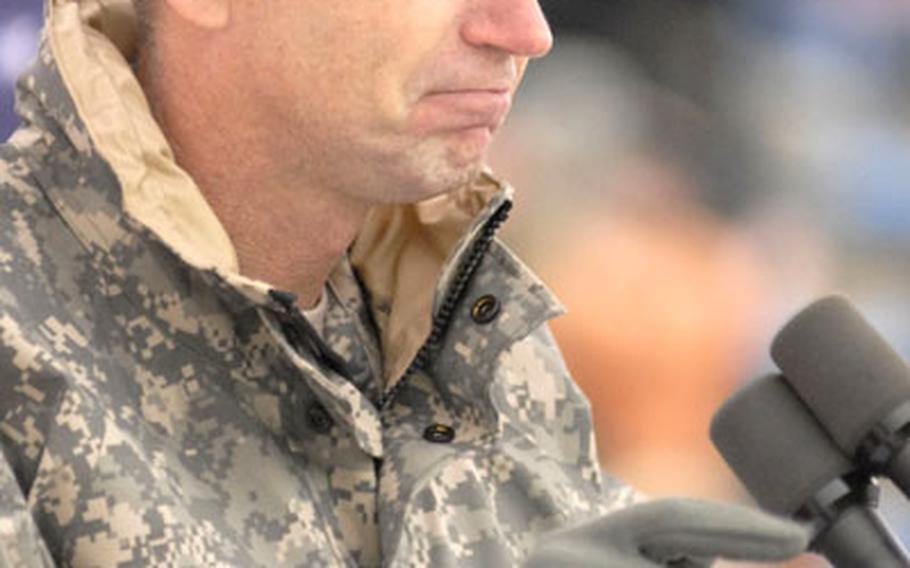 A rainbow of guidons and flags snapped in the stiff breeze Wednesday as the 1st Armored Division&#8217;s 2nd Brigade Combat Team officially ended its second tour in Iraq.

Desert camouflage jackets that the brigade&#8217;s soldiers wore during the welcome-home ceremony at Smith Barracks were the only allusion to the grim circumstances they faced just weeks ago.

Uncasing their unit&#8217;s colors back in Baumholder brought a sense of closure for some soldiers; for others, Wednesday could have been just another day.

For Sgt. Chad Rozanski, Wednesday&#8217;s ceremony was not the same old business. He was severely wounded July 2 when a roadside bomb caused his Humvee to roll over. He lost both legs.

Since July he&#8217;s been at Brooke Army Medical Center rehabilitating. This was his first time back in Baumholder since the unit deployed last November, and his first time seeing his buddies, who gathered donations to fly him and his wife to Germany for the welcome-home ceremony.

But for Staff Sgt. Steven Johnson, 34, a member of Headquarters and Headquarters Company 1st Battalion, 35th Armor Regiment, Wednesday was simply another day between this last deployment and his next. &#8220;On my first deployment I felt like I had come full circle,&#8221; he said. &#8220;But now it just feels routine.&#8221;

The Houston native spent his second stint in Iraq guarding the gates at his unit&#8217;s base in Ramadi and participating in patrols with the scouts.

Spc. Luis Rivera, 30, a member of Company B, 141 Signal Battalion, was happy to be home and trying not to think of the future or the past.

After the ceremony, Rivera sat in a gigantic festival tent drinking large cups of cold beer with some pals from his unit including Spc. Nathan Kovell, 23.

Asked about his favorite part of being back, Kovell, 23, of Temecula, Calif., silently raised his beer and smiled. The other soldiers sitting with him laughed.