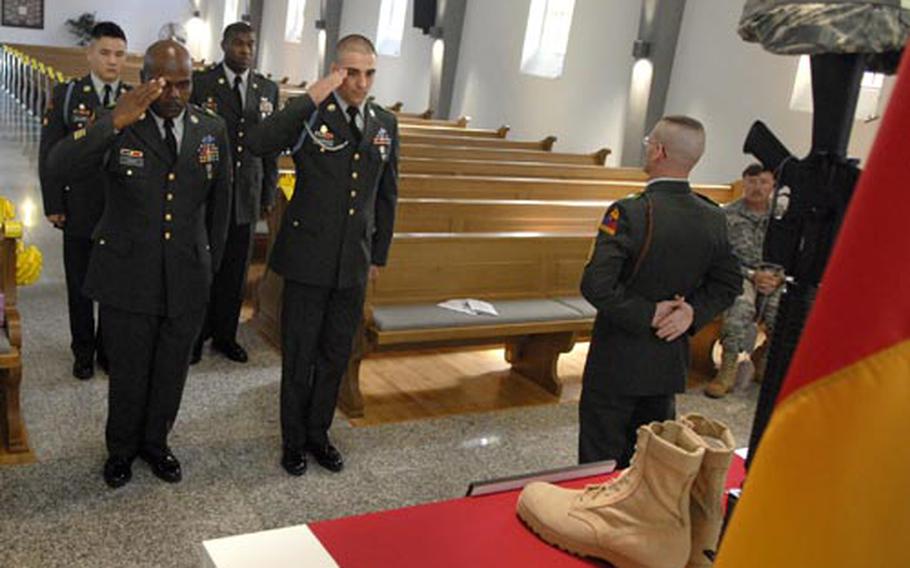 Soldiers pay their respects to Sgt. James A. McHale during a memorial ceremony Tuesday at a chapel in Baumholder. McHale, 31, a soldier assigned to the 40th Engineer Battalion died July 30 from wounds he received when a roadside bomb detonated near Nahrawan, Iraq, on July 22. (Ben Bloker / S&S)

Soldiers pay their respects to Sgt. James A. McHale during a memorial ceremony Tuesday at a chapel in Baumholder. McHale, 31, a soldier assigned to the 40th Engineer Battalion died July 30 from wounds he received when a roadside bomb detonated near Nahrawan, Iraq, on July 22. (Ben Bloker / S&S) 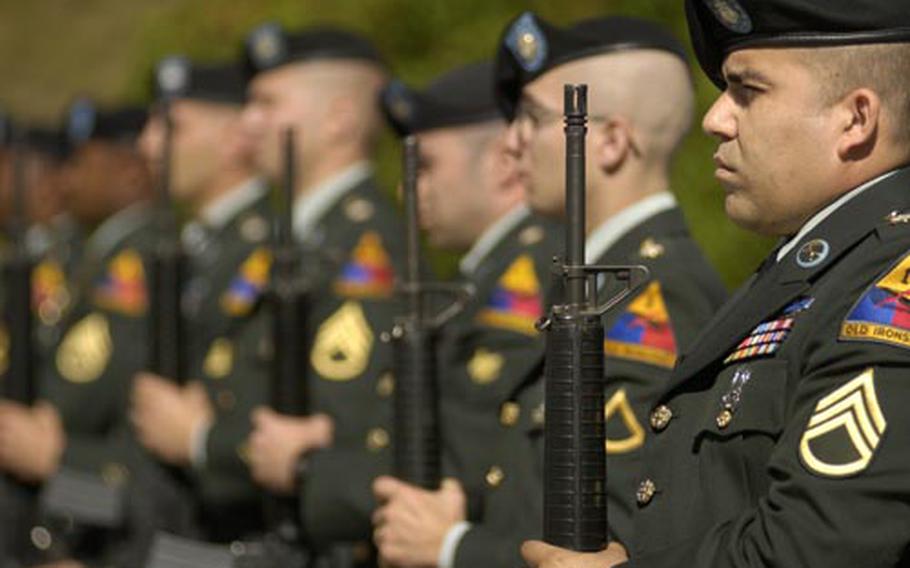 BAUMHOLDER, Germany &#8212; To his family, he was Jimmy. To the guys in his unit, he was simply known as Mac.

"Apparently, he was quite a character. I can only imagine what kind of names his best buddies called him," said Lt. Col. Dominic Sparacio, commander of the 40th Engineer Battalion, whose words of remembrance were read Tuesday to an audience of mourners.

Members of the Baumholder community gathered Tuesday to grieve the loss of Sgt. James A. McHale, a 2nd Brigade, 1st Armored Division soldier who died last week from injuries sustained when his vehicle was hit by a roadside bomb while on patrol near Nahrawan, Iraq.

During the service, memories and messages from McHale&#8217;s friends and fellow soldiers were shared.

McHale, a combat engineer, was critically injured when his vehicle was struck on July 22. He was transported to the National Naval Medical Center in Bethesda, Md., where he died July 30. McHale, who had been in a coma, was surrounded by friends and family at the time of his passing.

At Baumholder&#8217;s Chapel One, fellow soldiers recalled the 31-year-old McHale as alternately fun loving and quiet; hard working and easygoing. He also was a jokester with a taste for Irish whiskey, the soldiers said.

But when morale was down, he was always the first one to crack a joke and lighten the mood, soldiers said.

McHale enlisted in the Army Active Guard-Reserve in 1995, re-enlisted in 2005 and was assigned to the 40th Engineer Battalion later that year.

McHale was on his second tour in Iraq, where he served as a team leader in the 40th Engineer&#8217;s 1st Platoon, Company B. He kept a positive attitude despite serving while stop-lossed, a military policy that enables the Army to retain a soldier past his initial end of service date.

"Even though Sgt. McHale was stop-lossed, he continued to bust his butt," Spc. Louis Offerman said.

Though his fellow soldiers mourn, Offerman said McHale wouldn&#8217;t want the guys to dwell in sorrow. Rather, they should remember the good times, and "when the work was through, have a shot of Jameson for him," Offerman said.

Capt. John Holcombe said McHale&#8217;s job was a critical one for Company B. As an explosive ordnance clearance agent, he was tasked with making roads safe for others.

"He was a good leader and a good friend to everyone who met him," Holcombe said.

"He was an expert at his craft," Sparacio added.

McHale is the third Iron Brigade soldier who has been killed since the unit deployed to Iraq in April.

McHale is survived by his parents, Joel and Bonnie, and brother, Sgt. Michael McHale, who also is in the Army and serving in Iraq.