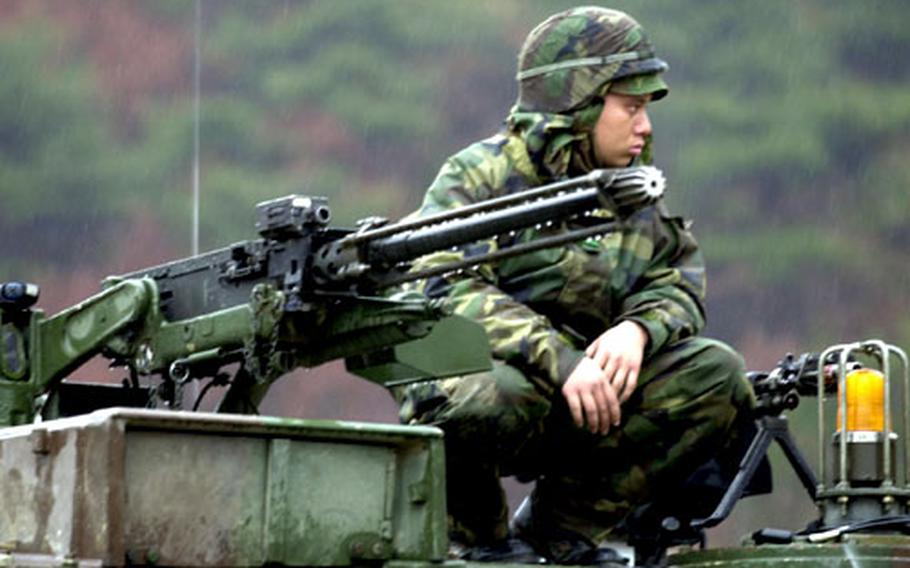 A tanker from Company B, 1st Battalion, 72nd Armor Regiment, perches atop his Abrams tank during a driving rainstorm. Troops from the 2nd Infantry Division are participating in Iron Artep. (Joseph Giordono / S&S)

A tanker from Company B, 1st Battalion, 72nd Armor Regiment, perches atop his Abrams tank during a driving rainstorm. Troops from the 2nd Infantry Division are participating in Iron Artep. (Joseph Giordono / S&S) 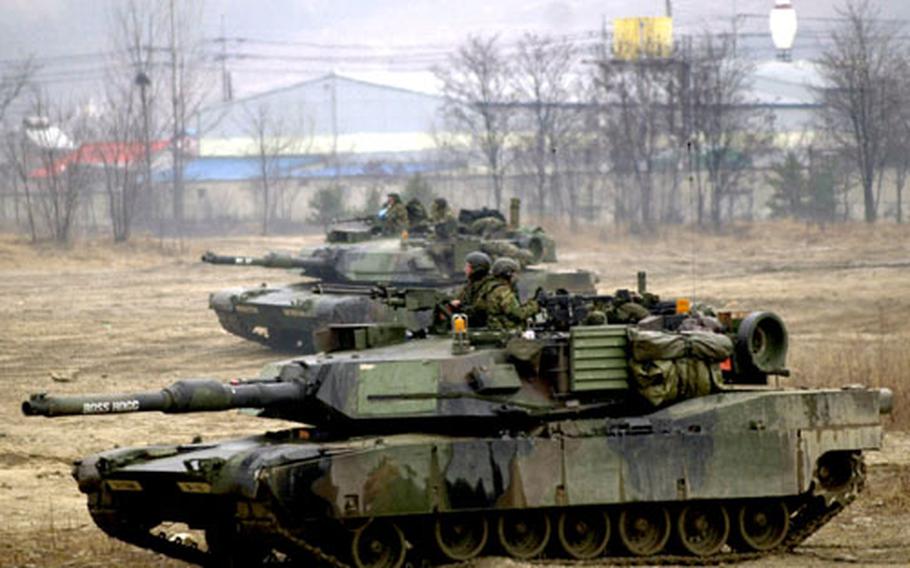 M1A1 Abrams crews from Company B, 1st Battalion, 72nd Armor Regiment go through a mounted rehearsal of a "breaching" attack during the first day of Iron Artep. (Joseph Giordono / S&S) 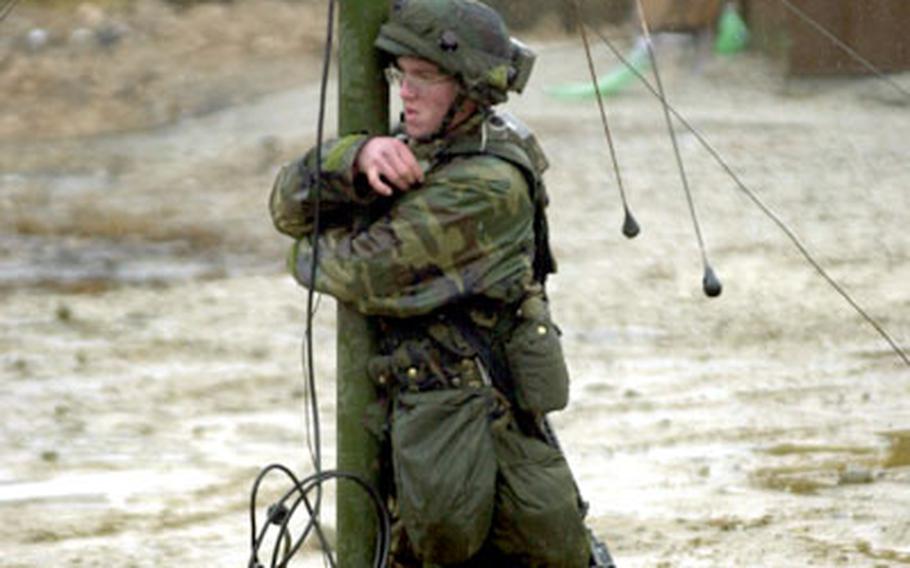 A soldier from the 102nd Military Intelligence Battalion props up a signal intercept post during Iron Artep. (Joseph Giordono / S&S) 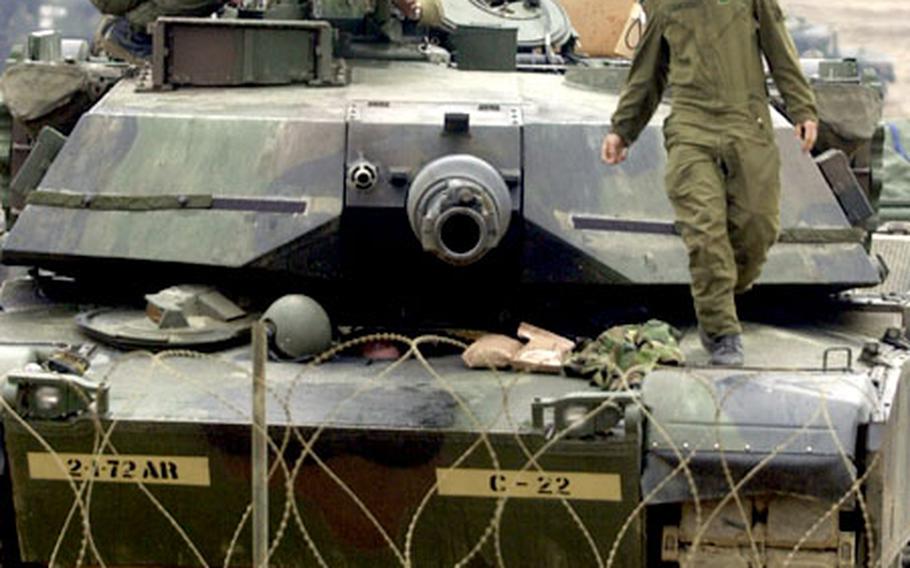 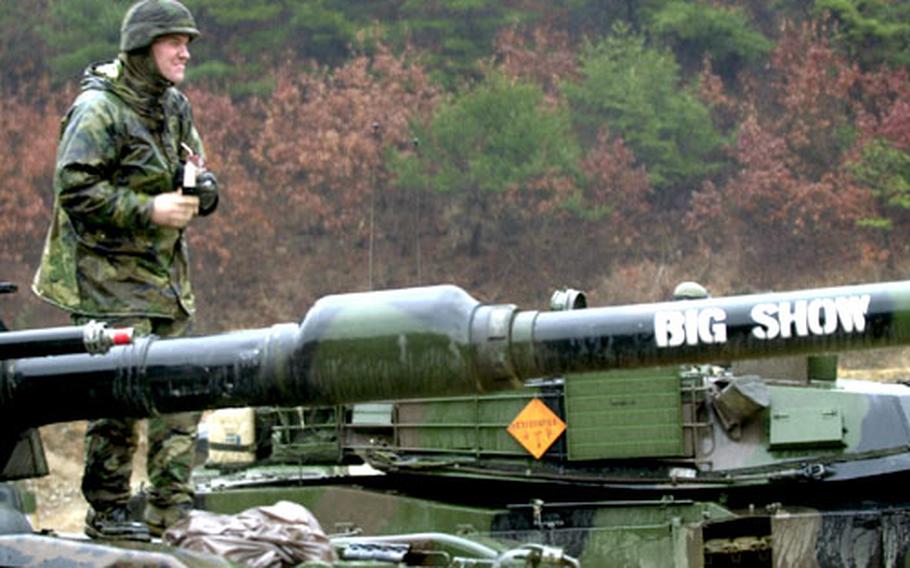 The buzzword for Iron Artep, which is scheduled to run through March 5 at various training sites near the Demilitarized Zone, is safety. And that was more than evident this weekend, when weather and road conditions prompted a 24-hour delay in the first major engagement.

Throughout the training area, assembly points turned into vast fields of mud and water. Soldiers tried anything to stay dry, but most quickly resigned to the fact that they were going to get soaked and chilled. Though forecasted snow had yet to hit, some soldiers hoped a deep freeze would at least cut down on the number of times their boots got sucked into shin-high mud.

Tankers from the 1st Battalion, 72nd Armor Regiment spent much of Saturday planning for their first engagement in the exercise &#8212; busting through a tank breach and assaulting an unknown number of &#8220;opposition forces,&#8221; played this weekend by 2nd Battalion, 72nd Armor.

Company B, tasked with busting through what scouts said would be a combination of mine fields, tank traps and concertina wire, rehearsed their attack in a wide field near their assembly area. As engineers ran out front and punched holes in the obstacles, the massive M1A1 Abrams tanks rolled into position, swiftly powering through the &#8220;breach.&#8221;

Company B got a little more time to tweak than planned. After a 3 a.m. road march to their attack position, word filtered down that the attack would be delayed 24 hours. But that didn&#8217;t stop some of the action &#8212; Saturday afternoon, a group of soldiers from the opposition force had somehow slipped into a friendly convoy, then jumped out of their vehicle and &#8220;destroyed&#8221; a mortar team.

The delay in operations reflected a larger emphasis on safety, officials said. Officials from 2nd ID implemented new rules in the exercises, both to prevent accidents and to mitigate the annoyance of South Koreans living in and near the exercise areas.

Among the plans: &#8220;1st Brigade and the 2nd ID will avoid movement of military vehicle convoys during peak traffic hours; temporarily close off maneuver training areas during simulated battles to prevent accidents; use Korean National Police and military police to escort convoys,&#8221; according to a press release.

Pilots of the 30 helicopters involved in Iron Artep have been instructed to avoid hovering over residential and agricultural areas, officials said. And most flights will be stopped before midnight; all simulated engagements will take place during daylight hours.

Brigade officials also hosted local community members and provincial leaders before the exercise began, explaining what would take place and how to make any claims if property damage occurs.

For the first time, local South Korean reporters are being included in overnight &#8220;embeds&#8221; with 2nd Infantry Division forces in the exercise Iron Artep, officials said.

The program has two purposes:

Help military officials plan and execute a media program similar to that of the Iraq campaign &#8212; which would likely be used here if operations were needed.

Get more information about the exercise to a wary South Korean public.

This weekend, reporters from the Korea Defense Weekly were embedded with armor units from the 1st Brigade Combat Team. One reporter showed up wearing a full camouflage Gore-Tex suit, similar to the cold weather gear issued to U.S. soldiers.

The reporters were given the option of covering U.S. units or a Republic of Korea Army infantry team training with the Americans; they chose to go with the U.S. armor.

2nd Infantry Division officials prepared special ground rules for the embedded reporters, including an injury waiver for accompanying troops in the field.

Getting South Korean reporters into the field is part of larger efforts to get more information about the U.S. Army and its efforts to minimize local disruptions during exercises, officials said.