Iraqis trying to doing more with less on the oil rigs 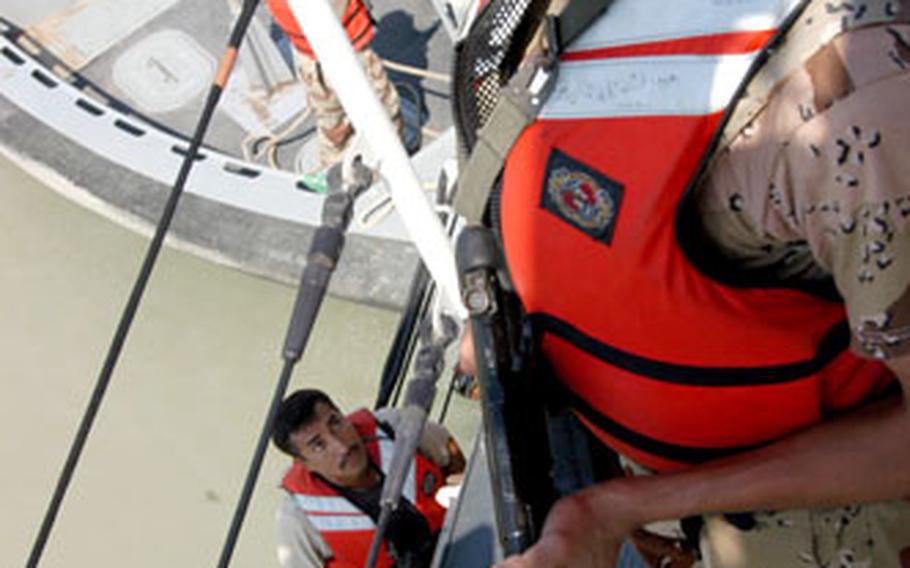 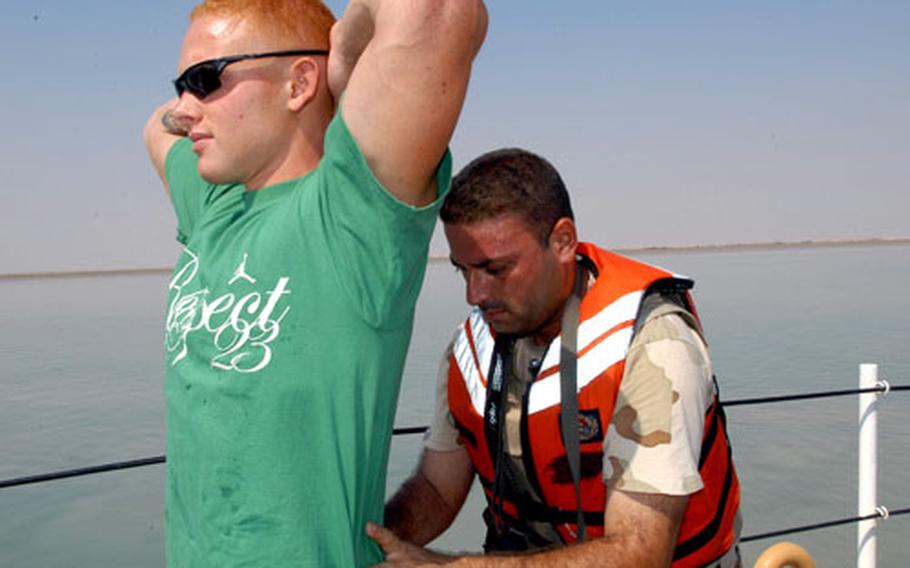 An Iraqi marine who did not want to be identified pats downSeaman Chris Laramee, 20, aboard the U.S. Coast Guard patrol boat Monomoy during a recent exercise in the northern Persian Gulf. (Jennifer H. Svan / S&S)

ABOARD THE USS PHILIPPINE SEA &#8212; For a group of U.S. sailors deployed from Guam, the only things that feel like home in the northern Persian Gulf are the sweat and humidity. For six months, Mobile Security Detachment 73 will live and work on Iraq&#8217;s two off-shore oil terminals, Basra and Khwar Al Amaya.

Built in 1975, the Basra terminal is Iraq&#8217;s bread and butter, comprising about 86 percent of its economy. Crude oil sells here for about half the price at other platforms in the region, and tankers from all over the world come here for fuel.

Khwar Al Amaya, a few miles away, is supplied by one small pipeline and was temporarily closed after a welding accident in May killed two Iraqi oil company employees and ignited a fire. But it&#8217;s still guarded around the clock as workers busily repair it.

Since arriving at the end of September, the Guam sailors at Basra are still adjusting to steel grating under their feet and the constant stench of crude oil.

The goal is to turn over the defense of the terminals to the Iraqis, said Navy Lt. Aaron Bergman, Mobile Security Detachment 73 officer in charge. The Iraqis officially already have operational control.

Iraq&#8217;s marine force is only a few years old, and about half the members of each of the six platoons are new recruits, Bergman said.

Not Saddam&#8217;s navyThe training is very different from past years, according to an Iraqi marine 1st lieutenant who was a naval officer for seven years under Saddam Hussein.

&#8220;Before, everything was difficult,&#8221; said the 1st lieutenant, who didn&#8217;t feel comfortable giving his name and who spoke through a translator. &#8220;We never had enough equipment. They sent us to get training, but we didn&#8217;t get it. Only thing that mattered for commanders under Saddam was getting more money, not better training.&#8221;

Ship captains are used to the old Iraqi regime, Bergman said, where corruption and bribery on the oil platforms ran rampant. &#8220;They get nervous when they see the Iraqis coming on board,&#8221; he said.

Equipment falls shortDuring a recent exercise on the Monomoy, one of two U.S. Coast Guard patrol boats conducting maritime security operations in the northern Persian Gulf, Iraqi marines participated in a vessel boarding search-and-seizure exercise. They were to look for illegal weapons and other contraband, search passengers and inspect ship documents.

The exercise, on the Khawar Al Amaya River, near the Iraqi navy base at Umm Qasr, wasn&#8217;t perfect, but the marines for the most part conducted thorough sweeps. Royal Australian Navy Warrant Officer Matt Buckley reminded them to check overhead wiring and hatches, good hiding spots for weapons.

Miller said the Iraqis recently inked a deal with the Italians for more patrol boats.

He believes more challenging for the Iraqis will be building the infrastructure, such as ship-berthing and places for sailors to live, eat and train.