Iraqis taking the lead? Yes and no 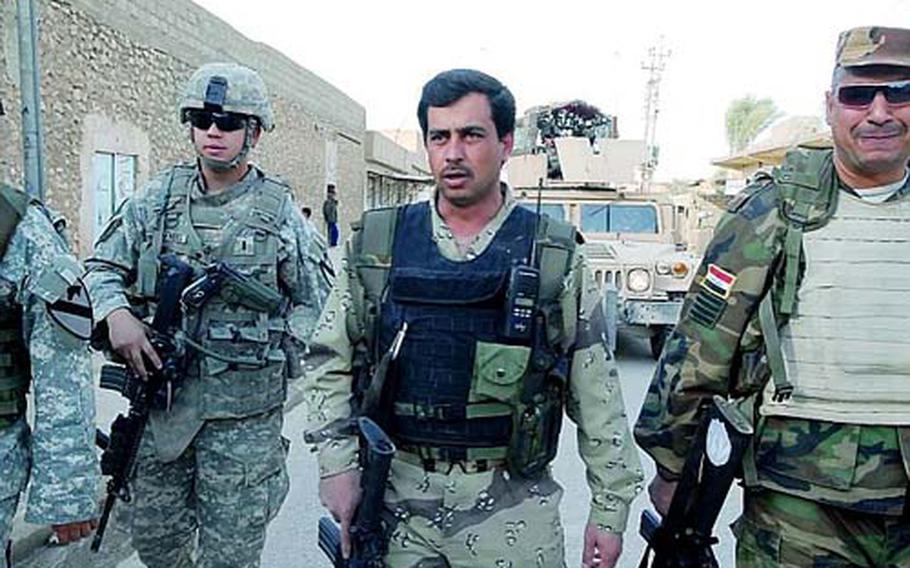 SHEIKH IBRAHIM, Iraq &#8212; First Lt. Corey Mathews got a surprise answer from an Iraqi army officer when he offered to organize a joint night patrol in this former insurgent stronghold west of Mosul.

"Whenever we need you guys, we will let you know," Maj. Muhammed Abdullah said, politely waving aside Mathews&#8217; question.

It was a disappointing response for the American platoon leader, who is with the 3rd Heavy Brigade Combat Team, 1st Cavalry Division. But it was an illustration of how things are supposed to work now that a security pact between the U.S. and Iraq puts the Iraqis firmly in the lead.

Across the country, U.S. military commanders repeat the phrase, "We&#8217;re trying to work ourselves out of a job."

On the ground, however, there is still much tokenism, driven by mistrust of Iraqi Security Forces, subpar Iraqi training and lack of communication.

In one seemingly unlikely place, though, the mandate is being implemented.

The pact &#8212; known as a status of forces agreement, or SOFA &#8212; declares that all military operations "shall be fully coordinated with Iraqi authorities." But many U.S. commanders don&#8217;t trust Iraqi forces enough to share advance information about troop movements.

Some Iraqi police and army stations are still thought to be infiltrated by insurgents. It doesn&#8217;t help that an interpreter calling on a spotty cell phone line is often the only mode of communication between Americans and local Iraqi commanders.

Some Iraqis also continue to lag behind in training, carrying their AK-47s haphazardly and improperly approaching potentially booby-trapped houses.

Joint patrols often start with U.S. soldiers showing up unannounced at an Iraqi station, asking if any Iraqis are available for a mission. U.S. soldiers will put the patrol plan in the form of a question to their Iraqi counterparts, but the missions are still largely American-planned.

During one such patrol in rural Diyala province, a platoon of U.S. troops stopped at a police station to tell Iraqi officers that they were headed to a nearby town whose residents long have been sympathetic to the insurgency.

After picking up a few Iraqi officers, U.S. soldiers led a search of the area while some Iraqi policemen broke off to take fuel and trinkets from abandoned houses and load the loot into their trucks.

Eventually, after a U.S. lieutenant asked the Iraqi officers if they planned to arrest a man suspected of helping insurgents, they cuffed the suspect and bundled him into a truck. It goes on the books as an Iraqi arrest, but it clearly would not have happened without American prompting.

Just outside Muqdadiyah, in central Diyala, a platoon of U.S. soldiers sprinted to respond when gunfire erupted outside an Iraqi army compound they were visiting shortly before the Jan. 31 provincial elections. When the soldiers reached the polling site that had been targeted, it was clear who was in the lead.

"Sgt. Banes is in charge here," 1st Lt. Tom Berry, referring to an American sergeant, told Iraqi police guarding the site. "None of your men shoot unless he (expletive) tells you."

Contradictions also remain on the road. For the most part, U.S. military vehicles are supposed to go with the flow of traffic, in contrast to earlier days when troops would order Iraqi cars to pull over and even drive in the opposite lane of traffic to minimize the threat of suicide car bombs.

While the more extreme measures have been dropped, in practice the rules of the road have remained largely the same, with Iraqi drivers still pulling over en masse on highways as American vehicles drive through.

Though violence has ebbed across Iraq, car bombs, one of the deadliest insurgent weapons, are still a regular occurrence. On Feb. 9, a suicide car bomber in Mosul killed four U.S. soldiers and an interpreter.

On a highway outside Tal Afar recently, American drivers honked until traffic on both sides of the highway pulled over, creating further gridlock on roads where travel is already significantly slowed by numerous checkpoints.

The tactics irk many Iraqis, who are already upset with checkpoints that cause nightmarish gridlock during rush hour.

Many American commanders don&#8217;t trust their Iraqi counterparts enough to include them in communication centers, shunting them off to other rooms or buildings if they&#8217;re included at all in mission planning. But anyone who walks into the 3rd Heavy Bridgade&#8217;s tactical operations centers in troubled northern Ninevah province will notice something novel: Iraqis working side by side with Americans, monitoring sensitive tips and troop movements. Getting information from Iraqi forces takes only as long as an interpreter&#8217;s translation.

What makes the Ninevah experiment more remarkable is that it&#8217;s happening in and around Mosul, widely regarded as Iraq&#8217;s most dangerous city, where the insurgency remains active. In mid-November, two U.S. soldiers were killed when a uniformed Iraqi soldier opened fire on them. And in late January, Iraqi police officers opened fire on U.S. troops, who returned fire, killing the officers.

Col. Gary J. Volesky, who assumed command of Mosul and surrounding areas last month, said moving Iraqis into the tactical operations center was an easy decision. Not only has the change improved trust between Americans and Iraqis but the improved flow of information also has led to more effective operations, said Volesky, who leads the 3rd Heavy Brigade Combat Team.

"If I am supporting them, why would I not want to integrate them into everything we do?" Volesky said.

Iraqi police Lt. Falah Hassan, who works in the Tal Afar tactical operations center, said the partnership has not only improved response time for U.S. and Iraqi forces but also boosted Iraqi confidence.

"We trust them and I think the coalition forces trust us," he said.

The U.S.-Iraqi security pact severely reduces the Americans&#8217; powers to detain and hold suspects, a subject of irritation for some U.S. commanders. But Volesky said the wrong mind-set often drives U.S. forces to resist letting Iraqis take the lead.