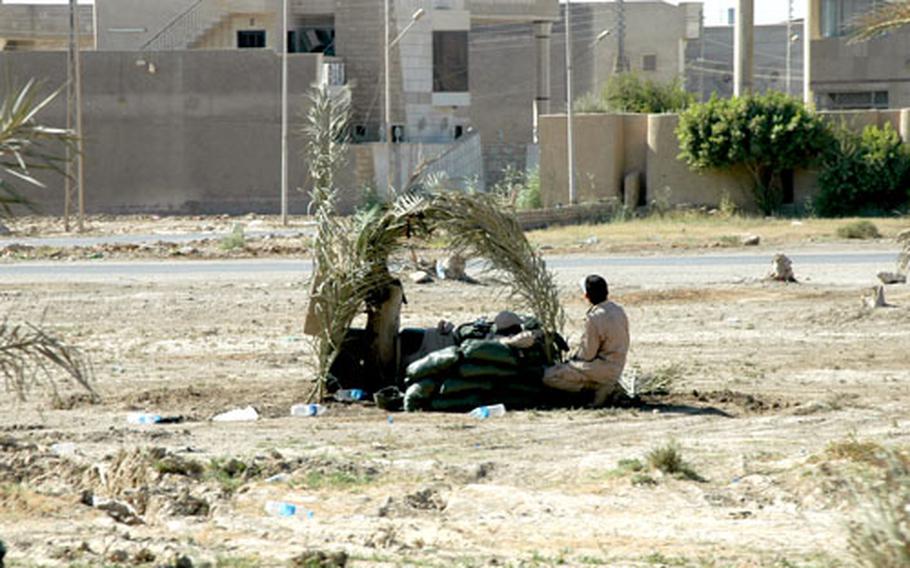 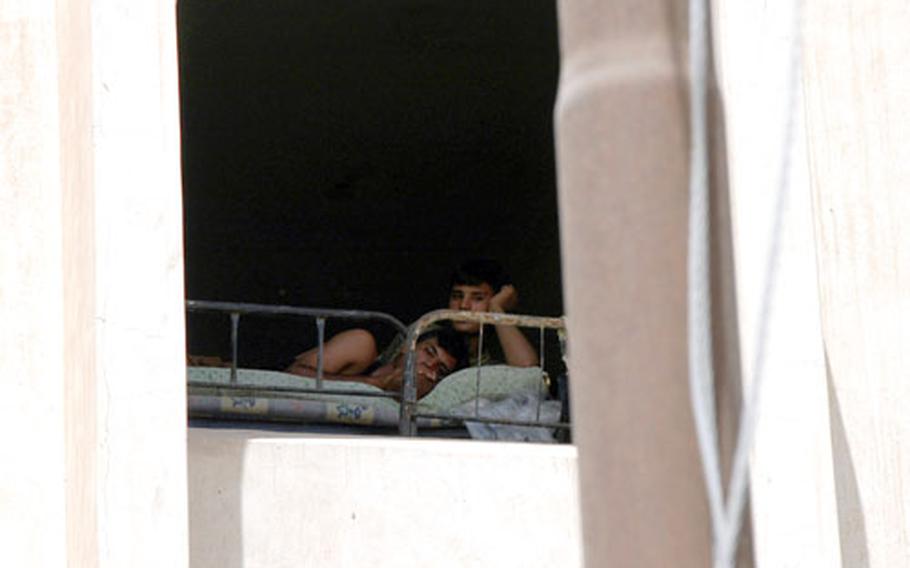 Two Iraqi policemen rest in their barracks, a building that once housed the Kuwaiti Embassy, on Airport Road. In June, the special police force began helping the Americans secure and patrol the road that connects Baghdad International Airport and the Green Zone. (Teri Weaver / S&S)

BAGHDAD &#8212; Nearly two weeks ago, a special force of Iraqi soldiers took up their new post along one of the city&#8217;s most infamous stretches, the link between Baghdad International Airport and the center of Iraq&#8217;s newly forming government, the highway known as Airport Road.

The first few days proved a hard test for the new battalion of 261 soldiers, according to Capt. Richard Dunbar, one of eight Americans assigned to assist the Iraqis in coordinating their patrols and responses to attacks.

The first attack on the troops came before midnight, and one was wounded, he said. During the next 48 hours, one soldier was killed and another six were hurt, Dunbar said.

Since then the gunfire has calmed down, Dunbar said, at least relative calm for the road that many westerners tend to call the most dangerous in the capital city. There have been fewer attacks, and the battalion has begun to gather helpful information from the neighbors, he said.

&#8220;These guys have made a tremendous impact,&#8221; he said Friday morning just outside the battalion&#8217;s headquarters, the former Kuwaiti Embassy. The Iraqi soldiers &#8212; officially called &#8220;special police&#8221; because they take orders from the Ministry of the Interior, not the Ministry of Defense &#8212; now live in the old embassy building.

Since June 1, they&#8217;ve sent patrols along and near Airport Road, positioned shooters behind sandbags aimed at the neighborhoods, and parked older, Russian-made mobile guns along the route to bolster the Americans&#8217; constant patrol of the road.

The road, which the U.S. military has dubbed &#8220;Route Irish,&#8221; is really a highway. It has two directions of traffic split by a median in the middle and surrounded by parallel side roads and neighborhoods on the outside.

The patrols have to worry about both: Insurgents can place bombs near the median and trigger them as military patrols, embassy vehicles or Iraqi residents drive through. The neighborhoods serve as shelter for snipers, grenade launchers and other attackers, said First Sgt. Clifford Ockman, 34, of Ama, La.

Ockman&#8217;s company &#8212; Company C, known as Black Sheep &#8212; is one of three whose only job is to patrol these six kilometers between the airport and the Green Zone, the collection of Iraqi government buildings, embassies and housing for many international dignitaries and the media.

The Black Sheep have lost more men than any other company within the 256th Bridge Combat Team formed of Louisiana and New York reservists: nine men in the nine months they&#8217;ve been deployed.

Their patrol is dangerous because of the popularity of the road. It&#8217;s the only way to get to and from the airport, and it&#8217;s the direct link to the Green Zone. The frequency of important travelers draws the frequency of attacks, Ockman and others said.

The three companies&#8217; patrol beat spills over into the neighborhoods, or mulhallahs, that line both sides of the highway, Ockman said. Often the insurgents will fire from the mulhallahs knowing the Americans will come investigate. Then the real attack of sniper fire, rocket-propelled grenades and homemade bombs will start, he said.

On Friday morning, the patrol stopped at a couple of houses where a roadside bomb had exploded just before 6 a.m. A few soldiers suffered minor wounds from shrapnel, Ockman said, but two Iraqi residents were hurt and taken to a local hospital.

The U.S. soldiers found the house where a father and son were injured. The boy had been sleeping inside the house, according to the family. Another small boy lay sleeping in the same room, and a bloody mattress hung on a nearby clothesline.

The family told Ockman they didn&#8217;t know any details about the injuries for the father and son, who were still at the hospital.

&#8220;Tell them how sorry we are,&#8221; Ockman said to a translator helping him talk to the family. In the next few days, more U.S. soldiers will visit to try and get details about the attack and to offer money, toys and food to the injured, Ockman said.

During most of the patrol, the convoy crawls along the road looking for bombs or bombers, waiting for something to happen.

Boredom interrupted by attack happens to patrols throughout the city, said Cerniauskas, the operations chief, during an interview Thursday.

When asked whether Airport Road deserves its popular nickname, Baghdad&#8217;s most dangerous road, Cerniauskas shook his head no.