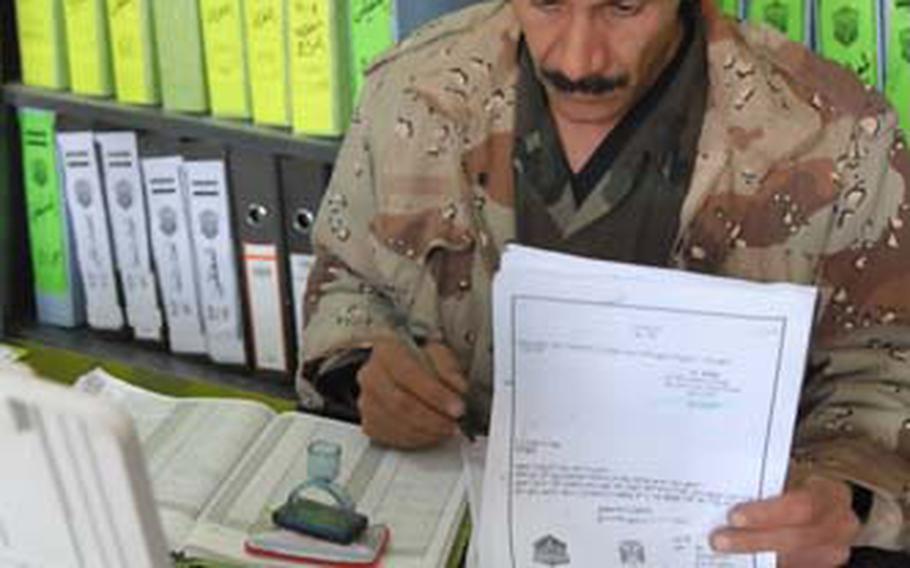 BAGHDAD &#8212; A never-ending stream of people flows from one unadorned room to the other in the investigators&#8217; wing of the old Ministry of Defense compound on Dec. 20. The Iraqi investigators march into the room, bark a few words and inevitably spread open an unremarkable file folder identical to those that have been the source of so much American sweat: warrant requests.

This wing is ground zero for the Iraqi army&#8217;s warrant-request process. When the Americans switch over to warrant-based targeting Jan. 1, these offices will be every bit as important to U.S. forces in eastern Baghdad. That experience will be echoed across Iraq, as the success of the looming transition is in the hands of the Iraqis as much as the Americans.

"As things shift, we want them to take more of a lead, and we would become more familiar with their process," said Maj. Dex Davis, an adviser to Iraq&#8217;s chief investigator for eastern Baghdad. "The only way to counter terrorism, long term, is rule of law."

The Iraqi army has been using warrants since February 2007, and has been working especially hard on obtaining warrants in the past six months. During that time, it has developed its own process for detaining people. It is this process that the Americans will be following when the security agreement between the two countries takes effect Jan. 1.

The Iraqi system is not a simple process. Multiple officers must sign off on a warrant packet before it even reaches the investigative judge who actually issues the warrant. Along the way, officials may take a couple days to make sure everything is in order. The system may seem slow to American eyes, but each step has a logical purpose for the Iraqis, as the Iraqi chief investigator in Rusafa explained.

"I want the (Iraqi Army&#8217;s) G-2 (intelligence officer) in the process for one reason: I want them to know how many cases with the coalition forces I&#8217;m dealing with," said the investigator, whose name could not be used because he did not have the government&#8217;s permission to speak to the press.

The investigator said the American push for warrants hadn&#8217;t increased his workload. On the contrary, soldiers are now doing much of the footwork that he and other investigators had to spend their time doing in the past.

"What they are doing is all the work in my name," the investigator said. "I&#8217;m the one benefitting from that."

American advisers said the workload had increased some for the Rusafa Area Command, the Iraqi entity in charge of eastern Baghdad.

The Iraqis also rely on coalition forces for technical expertise that helps them track down suspects. The Americans provide crucial supplies ranging from sprays that detect explosives to ordinary printer ink, said Capt. Tarir, the intelligence officer for the Iraqi brigade responsible for Sadr City.

The Iraqis aren&#8217;t pushovers when it comes to the processing warrant requests either, said Capt. Brian Patton, the adviser to the Rusafa Area Command&#8217;s intelligence officer. They second-guess American information that U.S. forces might not have questioned.

"They will provide a critical eye on American information sometimes we didn&#8217;t look at," Patton said.

Getting to this point required some adjustments because the Iraqis and Americans began with a different approach to warrants.

"Their main concern is prosecution. Our main concern is detention. That&#8217;s where the balance is being worked out," Davis said. "They don&#8217;t want to get targeted by the same guy they detained."

The Iraqis have also carefully guarded their role in the process as American involvement has increased. The investigator said he has no problem signing off on American warrant requests, but said they need to be written a specific way to actually get approval.

"Eventually, it has to come through me &#8212; through the Iraqi judicial system," he said. "I know how to address the issue to my judge."

Patton added that the investigators have personal access to the judges that allows them to get warrants right away.

The investigator described a meeting with senior Multi-National Division &#8212; Baghdad officials that illustrated these tensions. The investigator said he felt pressured to extend the time that U.S. forces can hold on to detainees before they must transfer them to Iraqi custody &#8212; a time that the security agreement limits to 24 hours.

"Two things we cannot dispute," the investigator said. "The detainee has to be in my facility, and it has to go through the Iraqi judicial system. Everything else is easy."

With only a few days until the security agreement takes effect, coalition and Iraqi lawyers are still hammering out the some details.

"Of course, both of us have the same goal, which is fighting terrorism," the investigator said.

After the detentionThe warrant is just the beginning of the legal process for Iraqi terrorism and security cases, which are handled differently than run-of-the-mill criminal cases.

Detention order: Within 24 hours, the detainee must have a review hearing to determine whether there is enough evidence to hold him or her. If there is, a judge will sign a detention order that must be renewed every two weeks until the person is convicted or released. Judges are more likely to approve a detention order if they signed the warrant.Investigation: Investigators from various parties &#8212; including the judge, the prosecutor and coalition forces &#8212; put together the case against the detainee.Investigation hearing: Once the judge determines there is enough information for a trial, an investigative hearing will be held. Like an American trial, evidence will be presented and the witnesses and accused may testify. Unlike in America, witnesses can testify anonymously because Iraqis have no right to confront their accusers. The judge will make a recommendation on the verdict and forward the case to the Central Criminal Court of Iraq.Central Criminal Court of Iraq: A three-judge panel will review the case, including the evidence and records of the testimony. They may question witnesses again, but they are not required to do so. Once they&#8217;ve concluded, the panel will render a verdict and impose a sentence, if appropriate.SOURCE: 3rd Brigade Combat Team, 4th Infantry Division Prosecution Task Force

Starting Thursday, American units in Iraq will be required to obtain a warrant for nearly everyone they detain. Their actions must follow terms set by the security agreement signed between the two countries. In a three-day series, Stars and Stripes examines how the military is preparing for this change.

Day One: Prosecution task forces&#8226; As New Year&#8217;s Day nears, U.S. troops prepare to hand over arrest authority to local judges&#8226; Soldiers learning the ropes of the Iraqi legal system, but some uncertainty over process remainsDay two: The Troops &#8226; &#8216;CSI: Baghdad&#8217; it isn&#8217;t: High-tech gear not a lot of help in getting Iraqi warrantsDay three: The Iraqis&#8226; Iraqis taking a larger role in securing warrants