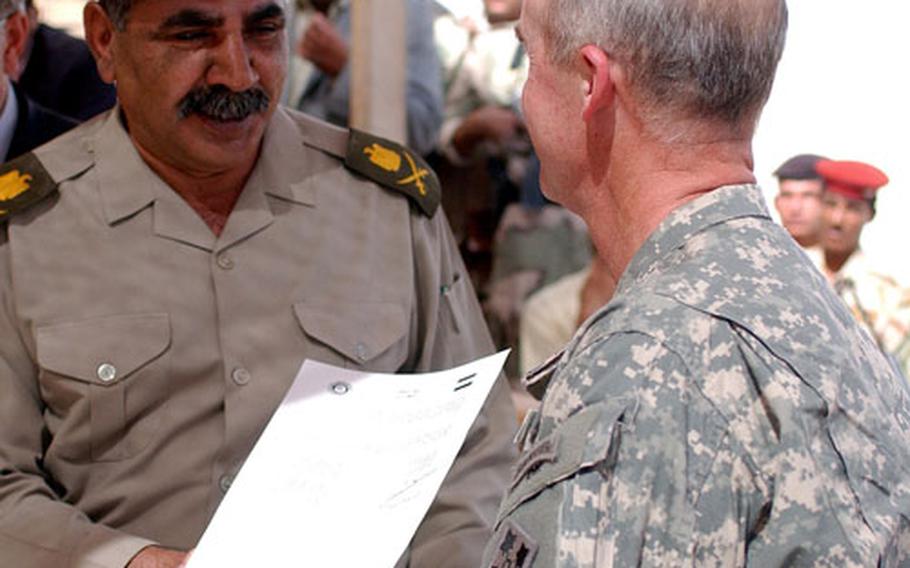 Now that Forward Operating Base Duke has been transferred to Iraqi control, it&#8217;s up to the Iraqi forces and government there to continuing being &#8220;an example for the rest of Iraq,&#8221; U.S. military officials said Tuesday.

Earlier in the week, members of the U.S. Army&#8217;s 2nd Brigade Combat Team, 4th Infantry Division, handed control of the base to Iraqi troops from the 5th Department of Border Enforcement.

The ceremony was also attended by the governor of Najaf province, where the base is located.

&#8220;This is a significant step in the [Iraqi Security Forces] stepping to the lead in the Najaf province,&#8221; Col. John Tully, 2nd Brigade commander, said. &#8220;The turnover of FOB Duke to the border patrol shows the ISF is strong and able to handle the security of Najaf. The Najaf province continues to be an example for the rest of Iraq because of its leadership.&#8221;

American troops in Iraq have handed over some two dozen of its former operating bases to the Iraqi government as part of its effort to transfer security responsibility to Iraq&#8217;s new military and government.

During the ceremony, Tully signed a &#8220;property release,&#8221; giving the 5th DBE ownership and responsibility for both the base and border security of areas that extend from the Iraq-Saudi Arabian border, to the southern portion of Anbar province, and through the Najaf and Al Muthanna provinces.