Iraqis suffer walls that divide and save 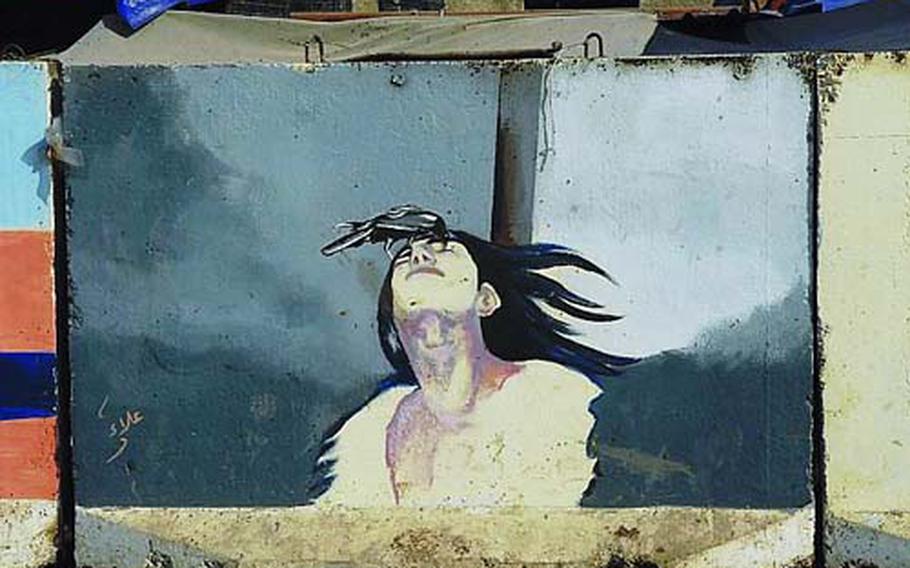 A striking mural stretches across a concrete security wall in south Baghdad. Iraqis feel the walls and checkpoints congest traffic and may not be needed any more. But U.S. and Iraqi security forces point to several recent bombings as proof that they are necessary. (Heath Druzin / S&S)

A striking mural stretches across a concrete security wall in south Baghdad. Iraqis feel the walls and checkpoints congest traffic and may not be needed any more. But U.S. and Iraqi security forces point to several recent bombings as proof that they are necessary. (Heath Druzin / S&S) 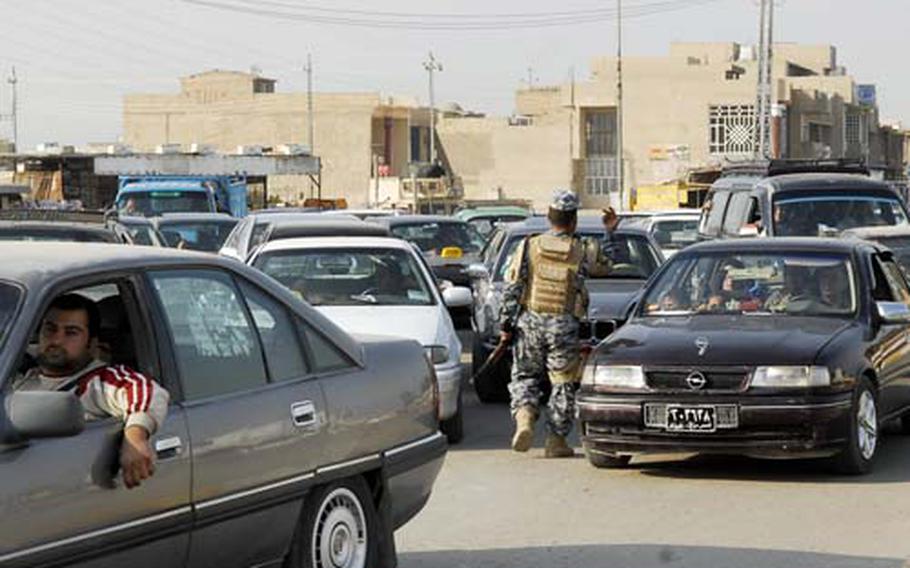 An Iraqi National Police officer directs gridlocked traffic at a checkpoint outside a south Baghdad market. Extra security measures in some neighborhoods are credited with reducing violence. (Heath Druzin / S&S) 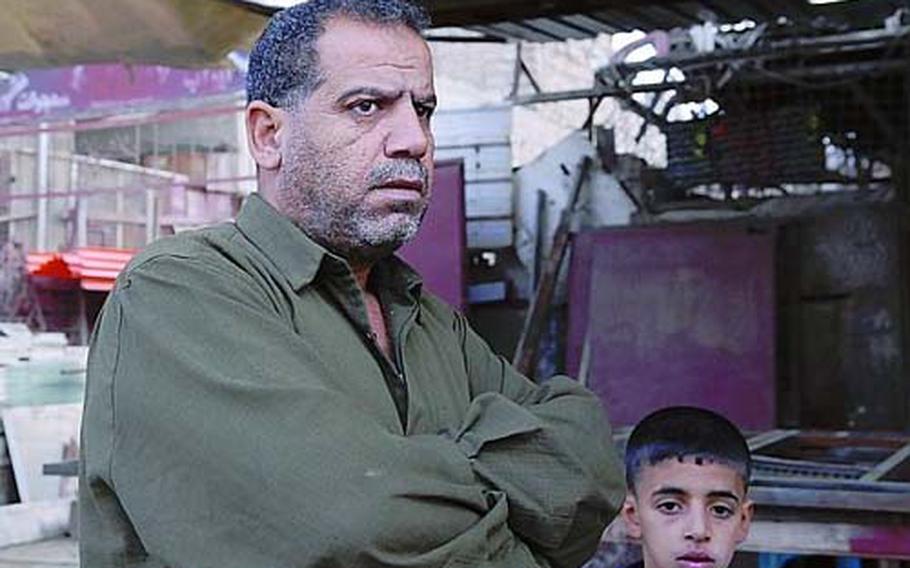 BAGHDAD &#8212; A mural splashed across a concrete blast wall in a traffic-clogged market here symbolizes how many Baghdad residents feel about ongoing security measures in the city&#8217;s more troubled neighborhoods.

The painting depicts a crow pecking a woman&#8217;s eye.

The artwork is part of a beautification project aimed at softening a landscape of ubiquitous checkpoints, concertina wire and concrete barriers that separates Sunni and Shiite neighborhoods and filters traffic to reduce the chance of car bombs.

No amount of art can change the congestion created by the security measures, which many city residents say are hurting business and creating unnecessary hassles.

"When they check the cars, they make the people late for work," said Haiwee Karim Abdal, who commutes across the city each day.

But troops with the 1st Brigade Combat Team, 4th Infantry Division, say the measures are still needed, and recent bombings appear to vindicate their caution.

Much of Baghdad&#8217;s Rashid district is comprised of makeshift shanties, with herds of dingy sheep and goats munching on the ample piles of trash that course their way through the area like a rotting river.

For several months, it was the scene of intense sectarian violence and fighting between insurgents and U.S. forces, with an average of 30 attacks per day at the height of the unrest in May of 2007, according to U.S. numbers. Those include roadside bombs, shootings and rocket and mortar attacks. Deadly market bombings were a regular occurrence, often with scores killed and many more injured.

Once one of the most dangerous areas in Iraq, Rashid has seen violence drop dramatically in the past year and a half, a trend both Iraqis and Americans credit to walling off certain neighborhoods and shopping areas and adding many checkpoints. The stepped-up security effort began in the spring of 2007 and almost immediately violence began to drop, bottoming out in August when there were only 24 attacks.

Recently, though, a spate of bombings &#8212; including several at busy markets &#8212; has put the area on edge. American and Iraqi security officials say that is proof the barriers are still needed to keep the fragile peace.

The air is thick with diesel fumes and the honking of car horns at an Iraqi National Police checkpoint outside the Abu T&#8217;Shir neighborhood&#8217;s main market. A lone Iraqi police officer wades upstream through gridlocked traffic trying in vain to move things along.

Taxi driver Moyad Suvhei said his fuel costs have skyrocketed with the extra security, profits floating from his tailpipe during traffic jams.

"We would like to remove all the barriers," he said.

Ironically, the very people who stand to gain the most from increased security at Baghdad&#8217;s markets &#8212; shopkeepers &#8212; voice the most stringent complaints.

"Our business in the past two months is bad because no one comes anymore," said Razaq Jabar, a blacksmith with a shop on the boulevard that cuts through Abu T&#8217;Shir&#8217;s main market.

Jabar, like many shopkeepers, says there is no problem with security and advocates at least adding more entrances to the market, if not tearing down the barriers and checkpoints completely.

Second Lt. Greg Bassett, with the 1-4, reminds Jabar that just six weeks ago a car bomb killed six people within spitting distance of his blacksmith shop.

U.S. soldiers say they have become a victim of their own success, with Iraqis getting a kind of safety fatigue from the drop in violence.

"They get lulled into a false sense of security," Bassett said.

The recent bombings also bring into question the effectiveness of the Iraqi National Police.

The question becomes more pressing with Iraqi lawmakers debating a proposed security pact that calls for U.S. troops to pull out of Iraqi cities and towns in seven months,

As soon as the officers spotted American troops coming their way, they began popping trunks and searching passengers.

Every car that goes through the checkpoint is supposed to be searched, said Staff Sgt. Jason Hellums, shaking his head.