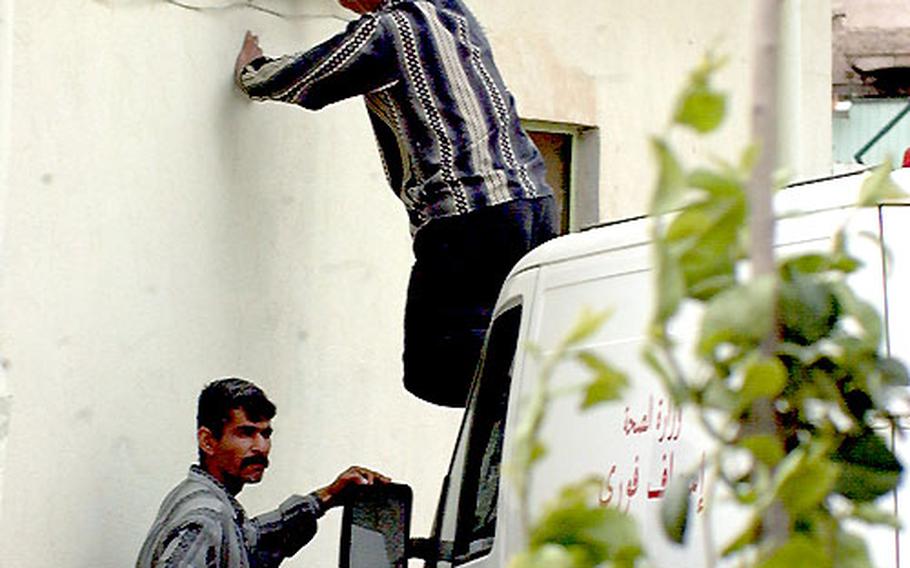 When it comes to health care needs in Iraq, shortages come in all shapes and sizes. For these two maintenance workers at Kirkuk General Hospital in northern Iraq, they’re short a ladder, so they improvise by using the hood of an ambulance to fix an outdoor light. (Kevin Dougherty / S&S)

KIRKUK, Iraq &#8212; As the director of Kirkuk General Hospital talks about the inadequacies of his medical lab, he&#8217;s interrupted by a knock on his office door.

A middle-age man enters, walks gingerly up to Hashim M. Al-Baiaty&#8217;s desk and hands the director a note. He stands still, favoring one leg. He looks disheveled, and his black belt is turned inside out, revealing a &#8220;Made in China&#8221; stencil.

Al-Baiaty looks very much like a school principal asked to authorize a sick slip, except that his desktop sags as he leans forward to read the note. Then the director picks up a rubber stamp and, with a quick dull thud, applies his seal of approval.

The man shuffles out the door, satisfied his broken leg has more time to heal.

For a country as rich in natural resources as Iraq, Saddam Hussein should, at the very least, face a malpractice board for his mismanagement of the health care system. A line would form to stamp that into the record.

&#8220;We hope the situation in Baghdad returns to normal,&#8221; Al-Baiaty said last week through an interpreter.

In 1970, nine years before Saddam came to power, Iraq&#8217;s military imports accounted for 20 percent of its total overseas expenditures, said Nawzad Rajab Botany, the director of planning for the Central Bank of Kurdistan. The rest went toward enhancing the country&#8217;s infrastructure and health care.

Essentially, the Iraqi health system, while not an exemplary model, was far better than most nations in the Middle East. To the people of Iraq, science and other disciplines, such as engineering, have always mattered, with or without Saddam.

But money matters, too.

Botany keeps meticulous records, and less than a minute later, as he hunches over a cup of tea and documents in an Irbil hotel, the noted economist finishes his dissection.

In 1984, at the height of the Iran-Iraq war, the percentages were the same, but the priorities had flip-flopped: military 80 percent, domestic 20 percent.

The shift nearly crippled social programs, including the medical field.

Sanctions against the government have certainly affected the Iraqi people. But since 1990, the U.N. Security Council has passed 29 resolutions pertaining to their humanitarian needs. The most notable of the lot is the May 1996 Oil-for-Food Program, which also allows for the purchase of medicines.

Stafford Clarry is an American who serves as the program&#8217;s humanitarian affairs adviser for the Kurdistan Regional Government. While critical of the United Nations&#8217; oversight of the program, he&#8217;s even more critical of the former Iraqi government. Figures were fudged, food and medicine, especially in the north, went undelivered and requests for equipment fell on deaf ears, Clarry said.

Money wasn&#8217;t the problem. The program generated more than $64 billion, according to U.N. figures. Fifty-nine percent was to go to central and southern Iraq, while 13 percent was earmarked for Iraqi Kurdistan in the north. The balance covered operational costs, such as pipeline fees, spare parts and administrative expenses. Oversight rested with the United Nations, but food and medicine were purchased and distributed by the Iraqi government.

Clarry&#8217;s report largely focused on the north. Its slice of the pie was about $8.3 billion.

Overall, the program spent $2.1 billion on medicine in all of Iraq, based on U.N. figures as of December. Iraqi Kurdistan&#8217;s share amounted to about $274 million. The report, citing World Health Organization statistics, stated, &#8220;the value of medicines delivered to Iraqi Kurdistan, as of August 2002, is only $100 million.&#8221;

Saddam&#8217;s &#8220;regime prevented the Kurdish region from having a good medical system by interfering with the delivery of goods and equipment,&#8221; Blake said.

When it came to talking about budgets and other numbers, the WHO coordinator in the north referred all questions to the organization&#8217;s chief representative in Baghdad.

Cheherezad Ghazi, an Egyptian who holds a doctorate degree in public health, said the situation in the north over the past two years has been steadily improving. She arrived two years ago.

With the war essentially over, Ghazi expects more WHO personnel to arrive shortly. Comparatively speaking, she said, the north is in good shape.

Salaries haven&#8217;t been paid in four months and security is sometimes a problem. He says the hospital is short of some basic supplies, medicine and equipment, though hospitals in Mosul and Sulaymaniyah have given what they can.

Down the road, Al-Baiaty would like to have better ambulances and the chance to improve and expand the 60-year-old hospital built by the British. His tired eyes brighten when he talks about the open space behind the hospital, but then reality dims them.