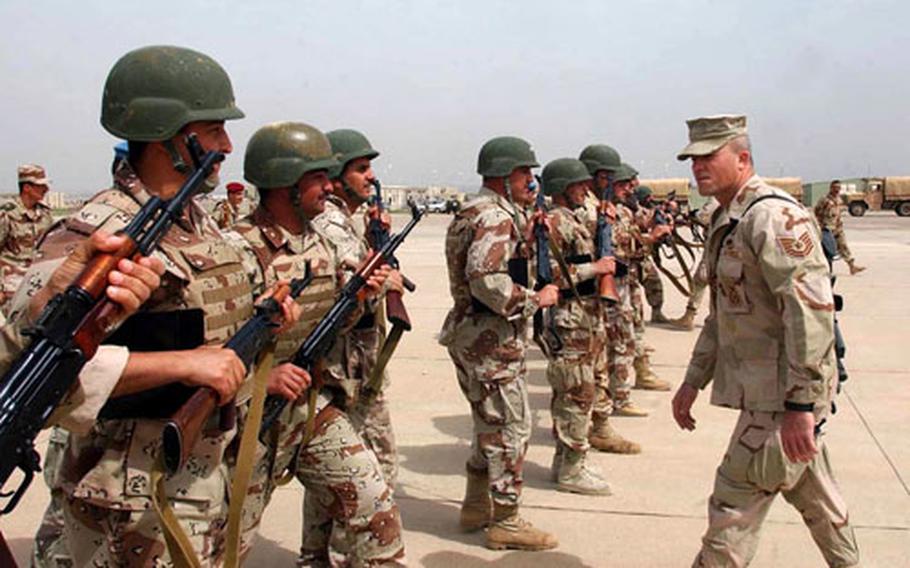 A U.S. airman trains new Iraqi army recruits in Kirkuk. The Pentagon has said that March was the least deadly month for U.S. forces in Iraq in more than two years. However, Iraqi civilians and security forces are now bearing the brunt of the violence. (AP)

While March was the least deadly month for U.S. forces in more than two years, Iraqi civilians and security forces are now bearing the brunt of continuing violence.

According to the Pentagon, 30 American servicemembers died in Iraq in March, the lowest number since February 2004. In fact, the number of U.S. casualties in Iraq has been falling since last November.

At the same time, more Iraqis were killed in March than in any other month since early last year. A shift in tactics &#8212; both by the American military and the insurgency &#8212; is the most common explanation for the numbers.

&#8220;What we are seeing him do now is shift his target from the coalition forces to Iraqi civilians and Iraqi security forces,&#8221; Maj. Gen. Rick Lynch, a U.S. spokesman, said Thursday at his weekly Baghdad press briefing. Lynch was referring to Abu Musab al-Zarqawi, the Jordanian militant and purported leader of al-Qaida in Iraq.

&#8220;The number of attacks against Iraqi security force members has increased 35 percent in the last four weeks compared to the previous six months,&#8221; Lynch said. &#8220;That is by design. The enemy knows the Iraqi security forces are increasing in capability.&#8221;

Combined with the eruption of sectarian violence following the February bombing of a revered Shiite shrine in Samarra, the shift in violence is taking a heavy toll on Iraqis, both uniformed and civilian.

In a gruesome example last week, U.S. and Iraqi troops found the bodies of 13 Iraqis along a &#8220;major thoroughfare in western Baghdad,&#8221; military officials said. The bodies were spread along the road for nearly 250 feet, officials said, and there was no explanation for who the men were or why they were killed.

In another incident last week, a suspected suicide bomber attacked a recruiting station near Tal Afar, killing more than 40 Iraqis.

According to U.S. officials, there have been 955 murders or &#8220;execution-style killings&#8221; in Baghdad alone since the February shrine attack.

Other U.S. military officials say a change in American tactics &#8212; and a larger reliance on emerging Iraqi forces &#8212; has reduced the number of U.S. deaths. In several parts of the country after the shrine attack, U.S. forces scaled back patrols and stayed on bases more than in previous months. And increasingly, Iraqi forces take the lead on search operations, with U.S. troops providing security. The consolidation of several U.S. bases and a shift to more airlift in recent months also has meant fewer U.S. convoys on Iraq&#8217;s dangerous roads.

U.S. officials also have blamed Iraq&#8217;s political stalemate for fostering an atmosphere in which insurgents believe they can derail the new government by fomenting sectarian violence. That criticism went so far as to include reports of U.S. officials demanding that Prime Minister Ibrahim al-Jaafari step down.

Al-Jaafari also has been heavily criticized for forming a political alliance with radical Shiite cleric Muqtada al-Sadr, whose powerful militia has been accused of forming death squads tolerated by the Shiite majority government.

The founder of Iraq Body Count, an anti-war group that tracks civilian casualties, said political problems are only part of the bigger picture.

&#8220;Talk of civil war is a convenient way for the U.S. and Iraqi authorities to mask the real and continuing core of this conflict, which is between an incompetent and brutal occupying power on the one hand, and a nationalist insurgency fueled by grief, anger and humiliation on the other,&#8221; John Sloboda said in a news release. &#8220;This conflict is proof that violence begets more violence.&#8221;