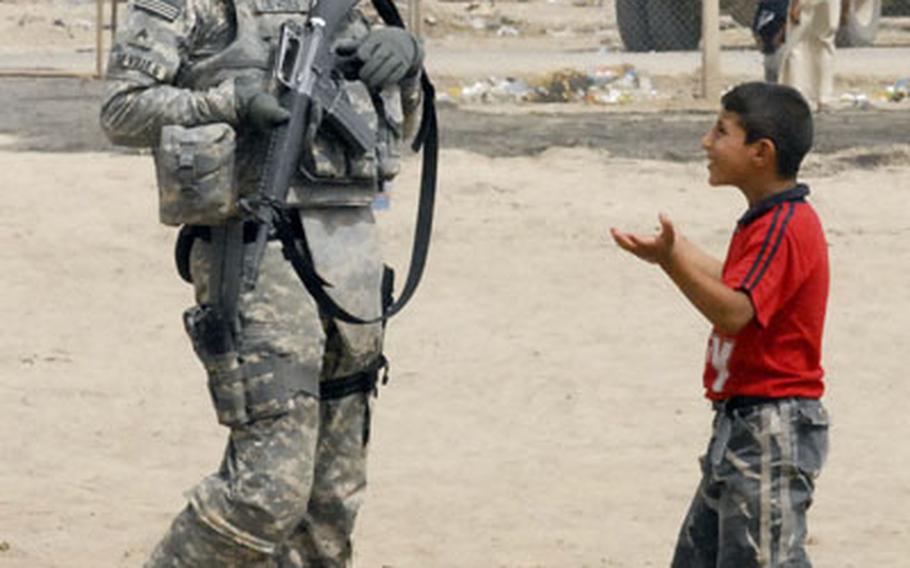 BAGHDAD &#8212; More than 240 families moved back into their homes in the Shishaan neighborhood of the city&#8217;s Rashid District on Saturday, an event that&#8217;s both uplifting and problematic for U.S. troops in the area.

The mass homecoming, coordinated by city planners, is the largest single-day arrival coalition forces here have taken part in, according to military officials.

First Lt. Michael Garlining, of 1st Battalion, 22nd Infantry Regiment&#8217;s Engineering Company, said nearly every day his unit sees a few families moving back into the area "but not on this scale."

Families at a "welcome home" event held in a neighborhood soccer field said they initially fled their homes because of violence in the district, but made attempts to return recently because of the drop in attacks and firefights over the last few months. Iraqi security forces said they hope to keep it that way.

"We made the preparations for you to return safe and secure to your area and your homes," Staff Col. Ali Abood, commander of the Iraqi 1st Battalion, 53rd Brigade, 14th Iraqi Army Division, told the families. "Our hearts are open to you as well as our eyes securing you, and we are asking the families to notify us if there is any lack of security in the area."

But returning residents &#8212; who had to prove their home ownership before being allowed back in the area &#8212; said their main complaint now is the lack of basic services. Water, sewer and electric lines were destroyed in fighting years ago, and none have been repaired despite the hundreds of families returning to the neighborhood.

"It&#8217;ll probably mean more grief for us," Garlining said. "The lack of services will probably cause tension between the people already there and those moving in, and we&#8217;ll have to deal with that on patrol.

"The neighborhood will eventually be better off for it. This kind of movement is needed to show the security situation is getting better. But now the government has to step up and get these projects moving."

Local officials took turns at Saturday&#8217;s ceremony praising the return of so many neighbors but also lobbying Baghdad officials to speed reconstruction in the neighborhood. Several citizens said they could not restart their lives without quickly getting reliable water and power lines installed.

Still, Sheik Talib Kwali, head of the local neighborhood advocacy committee, said he is optimistic the improvements can be made.

"They have been displaced for a long time, and we hope that our leadership, the Iraqi leadership and the coalition forces leadership will be able to provide a safe and secure environment," he said.