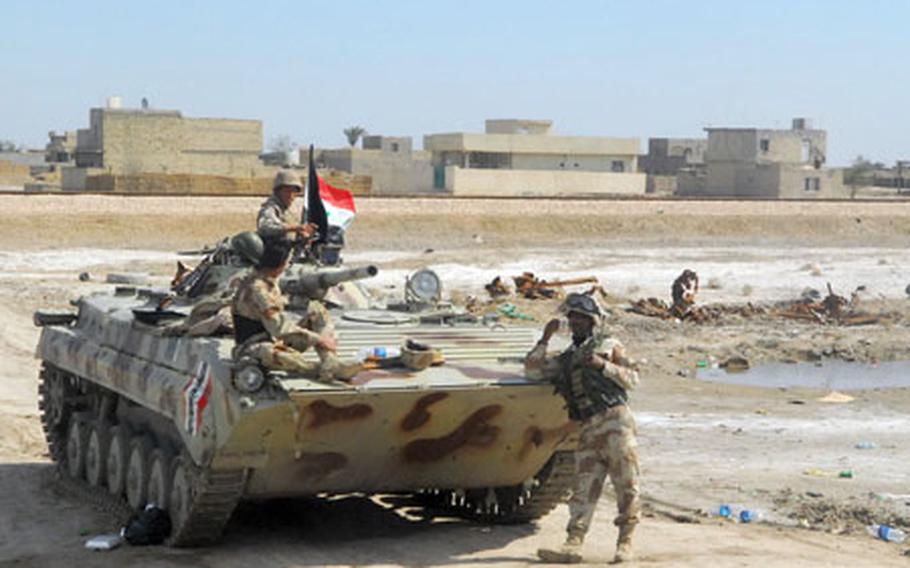 LATIFIYAH, Iraq &#8212; When Staff Sgt. Barry Belles stumbled unwittingly into a sniper&#8217;s kill zone in this Sunni town south of Baghdad, it was an Iraqi army soldier who grabbed his body armor and yanked the 33-year-old Wilkes-Barre, Pa., native to safety.

It was, he said, just one of many episodes in which Iraqi army soldiers have risked their lives to help U.S. soldiers who are training them to one day assume full responsibility for Iraq&#8217;s security.

Instead of embedding a 12-man Military Transition Team or &#8220;MiTT&#8221; with an Iraqi unit, the 2-10th Mountain has devoted an entire artillery battalion to the effort.

U.S. and Iraqi commanders say that the new strategy has speeded up the development of Iraqi army units, like the 4th Brigade, 6th Iraqi Army Division, and focused on joint operations. While the 4-6th Iraqi Army Division participated in only one brigade-level operation prior to the 2-10th Mountain&#8217;s arrival in Iraqi seven months ago, it has participated in roughly two dozen since.

While top U.S. commanders have long discussed &#8220;partnerships&#8221; with the Iraqi military, U.S. soldiers on the ground have often looked toward their Iraqi counterparts with equal parts of hope and mistrust.

That however, is not the case for soldiers like Belles, who say they view their Iraqi counterparts as members of their own unit.

Belles, like many Iraq veterans who have served previous tours here, recalls working with soldiers of the Iraqi National Guard, a precursor to today&#8217;s Iraqi army. It was not a good experience, Belles recalls, and it left him somewhat sour on efforts to train up Iraq&#8217;s new military.

He was amazed, he said, when he returned to Iraq and saw Iraqi army soldiers driving up-armored Humvees and Russian-made armored personnel carriers known as BMPs. He said he was also surprised to see how organized the new force had become since his last visit, and how Iraqi soldiers and commanders were launching their own operations based on intelligence they had gathered.

The Iraqis&#8217; initiative was on prominent display recently during the Arba&#8217;een pilgrimage, when millions of Shiite faithful trekked to Karbala. The Iraqi Ministry of Defense drew up its own security plan, and Iraqi army soldiers were out in full force.

While suicide bombers and gunmen killed scores of pilgrims to the north and south, the 4-6 Iraqi Army Division&#8217;s area of operations did not experience any significant incidents.

The unit&#8217;s gains have come at a price. Many Iraqi soldiers died in efforts to combat insurgents in this mixed Sunni-Shiite area once dubbed the &#8220;triangle of death.&#8221;

&#8220;When we first got here it was tough,&#8221; said Bravo battery commander Capt. Andrew Visser, 30, of Indianapolis. Visser said that Iraqi army outposts to the west, near the Euphrates River, saw frequent attacks and U.S. supply runs to the stations encountered many powerful roadside bombs.

The threat has tapered off tremendously though, due in part to numerous joint operations that have uncovered hundreds of weapons caches in this largely rural area.