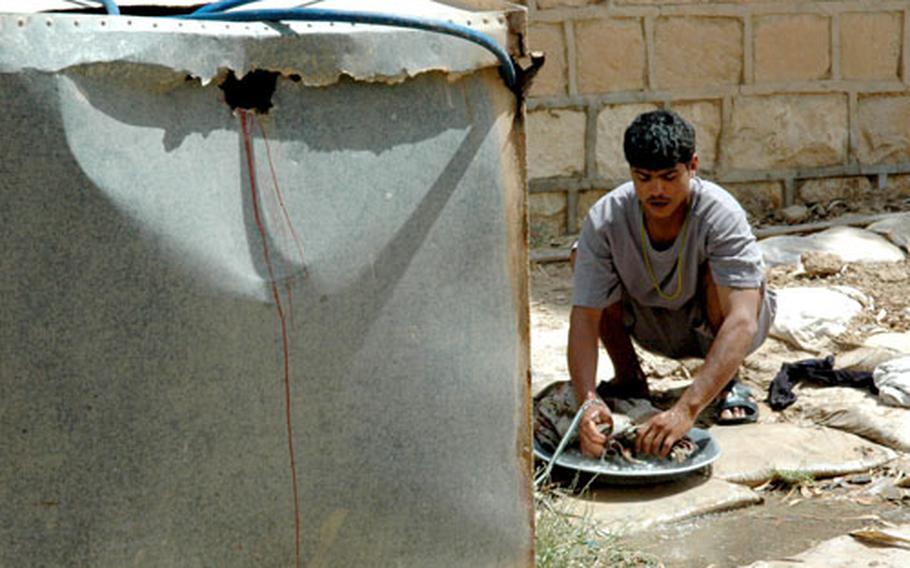 An Iraqi army soldier washes his unform at a small Iraqi army outpost in Haditha, where poor living conditions are prompting soldiers to leave the army. (Andrew Tilghman / S&S)

An Iraqi army soldier washes his unform at a small Iraqi army outpost in Haditha, where poor living conditions are prompting soldiers to leave the army. (Andrew Tilghman / S&S) 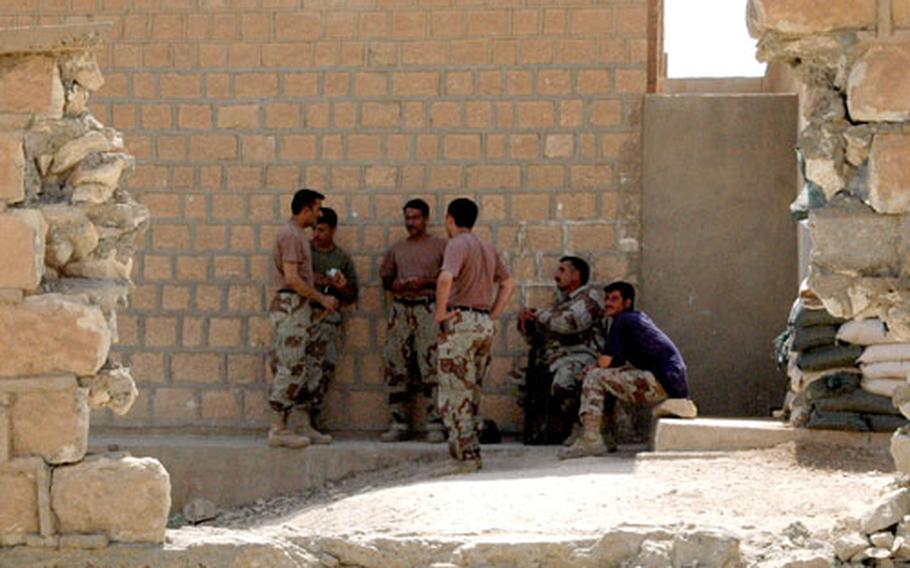 Iraqi army soldiers in the Haditha area are fleeing the Army at a rate of roughly 100 per month. (Andrew Tilghman / S&S) 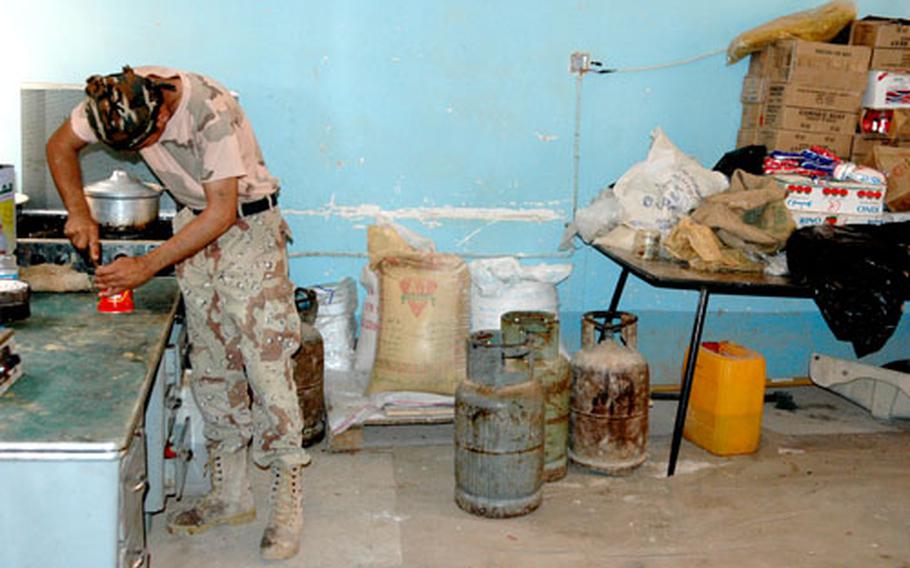 An Iraqi army soldier prepares food in the kitchen of his small patrol base in Haditha. (Andrew Tilghman / S&S)

Lousy living conditions, bad food and failure to receive regular pay are the main reasons behind the exodus, which is running at least several hundred soldiers a month, the officials say.

&#8220;Many of my soldiers have not gotten paid in six months. Sometimes, they don&#8217;t eat for two or three days at a time. I tell my commander, but what else am I supposed to do?&#8221; said Lt. Moktat Uosef, a 29-year-old Iraqi army company commander based in Husaybah.

Uosef&#8217;s brigade is one of the most troubled. The 4th Brigade of the 7th Iraqi Army Division has lost nearly half its soldiers during the past six months, dropping from 2,200 troops in December to fewer than 1,400 in May, according to Marines who work with the Iraqi unit.

In Haditha, the Iraqi army brigade has been losing about 100 soldiers a month, dropping from more than 2,000 at the beginning of the year to fewer than 1,600 in May, Marines said.

The past six months has been a key test for the Iraqi army in western Anbar. Last fall, its soldiers were integrally involved for the first time in large-scale operations that cleared out the cities between Ramadi and the Syrian border. U.S. troops hailed the joint missions as a indicator of the Iraqi army&#8217;s future success.

Since then, the Iraqi units have paired with U.S. Marines in a network of bases throughout the Euphrates Valley, providing a level of troop density previously not possible with U.S. forces alone.

Logistics has been the Iraqi army&#8217;s primary problem here. The Iraqis complain most about the persistent problems with food and pay rather than the bouts of combat and casualties.

The problem came to a head in April, when hundreds of Iraqi soldiers in western Iraq went &#8220;on strike&#8221; and, under orders from lower-level officers, refused to go out on patrol or stand guard at the many bases they share with the Marines.

The Iraqi soldiers&#8217; refusal to work strained their relationship with some Marines, who in turn refused them access to the televisions and gyms that the troops typically share at small bases.

The &#8220;strike&#8221; ended after two days, but it underscored the abysmal morale that affects many Iraqi units in the area.

Iraqi army soldiers do not sign enlistment contracts, allowing them to leave the army whenever they choose.

Morale is also strained by the fact that many of the Iraqi soldiers are from the southern, mostly Shiite, areas of Iraq, and they consider the assignment in western Anbar to be the most dangerous, remote and unpleasant posting in the country.

Some Marines try to take an optimistic view of the situation.

&#8220;A lot of guys leave, but what we are left with is really a committed core of soldiers,&#8221; said Lt. Col. Paul Lebidine, head of the military transition team that works with the Al Qaim-based brigade.

Upper-level U.S. commanders are hesitant to provide direct and permanent logistical support to the Iraqi army. They hope that by allowing the Iraqis to manage their own problems through their Ministry of Defense, they will learn from their mistakes and develop independently.

But some Marines in the field believe the U.S. forces also should help the Iraqis, because the coalition needs them to win the fight in Anbar. Lt. Col. Nick Marano, commander of the 1st Battalion, 7th Marine regiment in Al Qaim, suggested that the U.S. military should take over the Iraqis&#8217; payroll process to ensure troops get paid consistently.

The lawlessness in Anbar will take years to resolve, and the Iraqi army provides one of the only realistic hopes for reducing U.S. troop levels, said Lt. Col. Norman Cooling, commander of the 3rd Battalion, 3rd Marines Regiment in Haditha.

&#8220;The insurgent activity is directly proportional to the force density in the area. But that force density doesn&#8217;t have to be American. That is why the Iraqi security forces are so important,&#8221; he said.

Uosef, who lives with dozens of Iraqi troops at a small patrol base near the Syrian border, said his soldiers are brave and eager to fight when needed. But the day-to-day living could prove to be the Army&#8217;s fatal flaw.