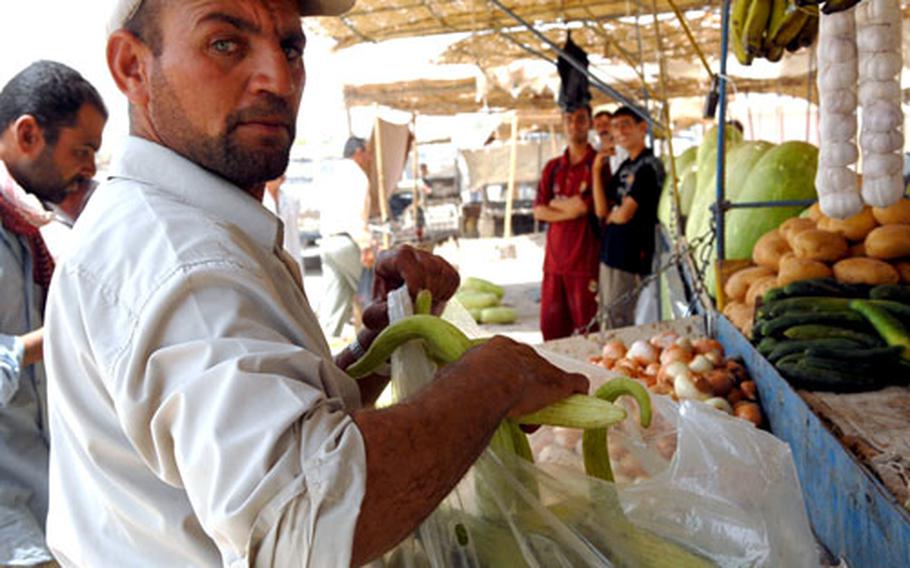 Ghazi Hajim places vegetables in a bag Monday for a customer at a Balad Ruz, Iraq, market. The Iraqi government has announced an upcoming offensive in an unspecified part of Diyala province, where the city is located. Hajim thinks the operation will bring stability and make it safer for potential customers to visit the market. (James Warden / S&S)

Ghazi Hajim places vegetables in a bag Monday for a customer at a Balad Ruz, Iraq, market. The Iraqi government has announced an upcoming offensive in an unspecified part of Diyala province, where the city is located. Hajim thinks the operation will bring stability and make it safer for potential customers to visit the market. (James Warden / S&S) 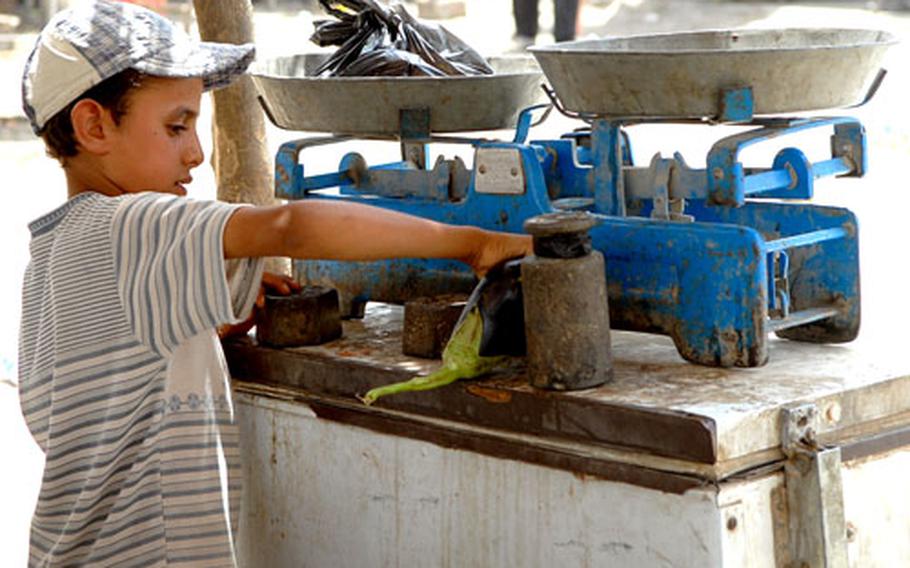 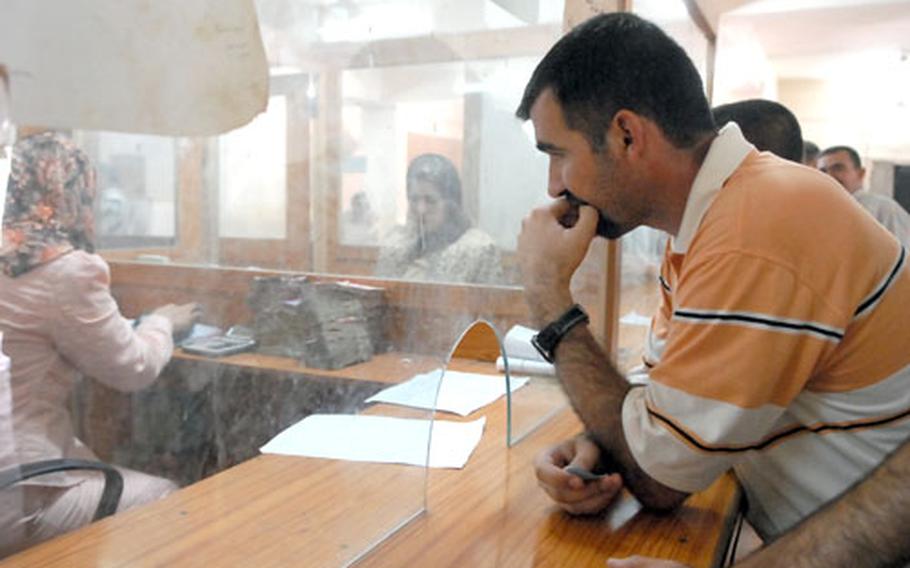 Ahmed Mahroof waits for money Monday at a Balad Ruz, Iraq, bank. Past military operations have brought about sufficient security for banks such as this one to stay open, so many local residents favor an upcoming Iraqi government offensive planned for an unspecified part of Diyala province. (James Warden / S&S)

BALAD RUZ, Iraq &#8212; Residents of this small city in eastern Diyala say they are excited about an imminent Iraqi offensive in their province, even though it could bring fighting to their doorsteps.

Prime Minister Nouri al-Maliki announced publicly in June that the Iraqi government&#8217;s next big push will take place in an unspecified part of Diyala province. The operation will be the latest Iraqi-led maneuver to clear insurgent strongholds &#8212; in this case, the bastion of weakened al-Qaida in Iraq groups. Iraqi security forces have previously led offensives in the Shiite city of Basra and Sunni-dominated Mosul.

"We were really happy to hear that," Abbas Ahmet, a Balad Ruz resident, said about al-Maliki&#8217;s announcement.

No one has released specifics about when or where the operation will take place, but al-Maliki&#8217;s public remarks that something is planned for this province are enough to make the offensive a topic of conversation at public venues like the Balad Ruz city council meeting on Monday.

Col. Faris Raadi Abbas, Balad Ruz&#8217;s police chief, told American civil affairs advisers that rumors are circulating about soldiers surrounding some places in the province and not others.

"Actually, 15 days or a month ago, we saw everything in the media," Abbas said.

It won&#8217;t be clear how true those rumors are until the operation actually begins, but Balad Ruz residents on Monday were already looking forward to the changes they hope to come out of the offensive.

Usama Salah is a Balad Ruz businessman who travels a lot. While he doesn&#8217;t worry about his safety in his hometown, Salah said it&#8217;s dangerous to travel to other places in the province like Baqouba.

"We love these things," he said. "We want these things so we can make sure the security situation is 100 percent in this country."

Abbas Tahir, who owns a vegetable stand in one of the Balad Ruz markets, echoed Salah&#8217;s comments, adding that he thinks Iraqi soldiers will be able to bring order to the area.

"It&#8217;s a very good thing because the security situation will be stable," he said.

Some people did have concerns about the chaos that the fighting could bring. Ghazi Hajim, another man selling vegetables in the market, said he wants government troops to be very specific about whom they arrest.

"We are happy to hear about the operation, but we don&#8217;t want the government to arrest everyone," he said.

Abbas told the American advisers that he hoped the soldiers would be able to fight the insurgents in the countryside, instead of populated areas.

But others brushed aside worries about the risk to civilians. Tahir said he wasn&#8217;t concerned at all, while Salah had a more measured opinion.

"Maybe some innocent people will get hurt, but we want the security situation to be stable," Salah said.

Even Hajim said he expects any upcoming operation to make it easier for people in the province to visit the Balad Ruz markets where he sells his vegetables.

"Business will be better for me," he said. "The security situation will stabilize so people can come buy from us."

Staff Sgt. Dave Schlicher, with the 407th Civil Affairs Battalion, encouraged Abbas to continue working with the local governments, whatever happens with the operation.

Residents will want to see the government bringing clinics and other helpful projects to the area in addition to armed soldiers.

Hajim reinforced Schlicher&#8217;s point later that day when he complained that there still isn&#8217;t enough work in Diyala and that people have to be well-connected to get a good government job. But he said the security improvements residents have seen over the past year should keep his neighbors from getting upset when Iraqi army soldiers at last take on the insurgents.

"Now the people, they are starting to understand what&#8217;s going on," Hajim said.