Iraqis head to the polls 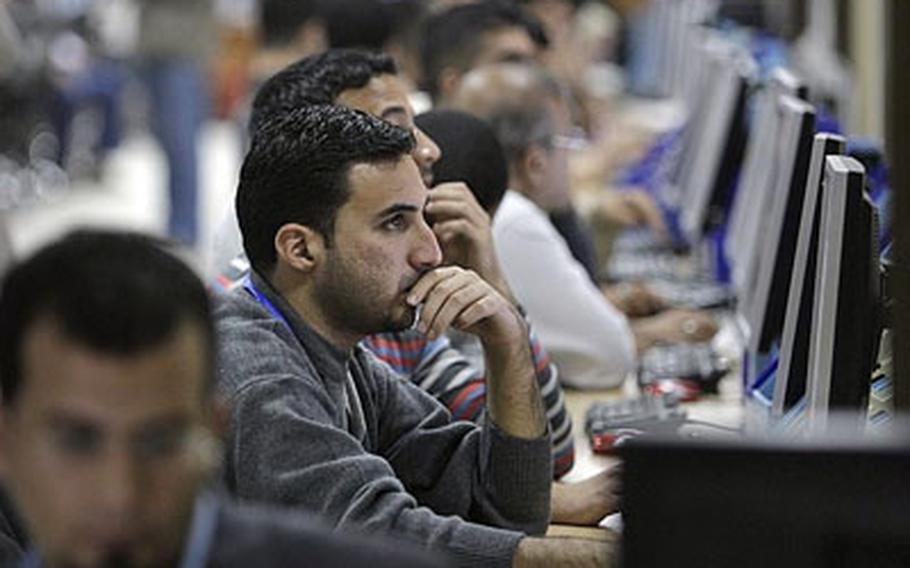 BAGHDAD &#8212; Iraqis will head to the polls Sunday under heavy security in an election that will determine the country&#8217;s course as U.S. troops begin to depart.

Those vying to lead Iraq include an alliance of religious Shiite parties that would likely bring the country closer to Iran and a secular coalition with strong Sunni support more likely to ally with Iraq&#8217;s Sunni Arab neighbors and the West.

But more immediate concerns focused on the legitimacy of the vote itself and the likely difficulties of its aftermath.

Early voting for members of Iraq&#8217;s security services began Thursday and was quickly met with complaints of irregularities. Rand Rahim, a member of a secular coalition led by former Interim Prime Minister Ayad Allawi, said Friday that she had visited polling sites and found general chaos with no election supervisors present.

Some who had voted also reported being able to easily wash off the purple ink that is supposed to last for three days and prevent people from voting multiple times, Rahim said.

Accusations have flown across the political spectrum in recent days, with parties accusing each other of buying votes and being unduly influenced by foreign countries, among other things.

Meanwhile, with none of the main alliances likely to come close to a majority, the election could only mark the beginning of a long period of political uncertainty as Iraq&#8217;s factious politicians attempt to form a new government.

That prospect is especially troubling to American officials as the U.S. prepares to withdraw about half its nearly 100,000 troops in the coming months. The political turmoil that followed the 2005 election is seen as having opened the door to sectarian violence that quickly pushed the country to the brink of civil war.

The run-up to this election has already been marred by sporadic violence. A car bomb killed seven people in the southern city of Najaf on Saturday, a day after a mortar attack in Baghdad left four dead. A car bombing in the northern city of Baqouba killed at least 31 earlier this week.

Twice as many civilians have been killed in February as in January, though violence remains far below past years.

Iraqi Prime Minister Nouri al-Maliki declared a four-day election holiday beginning Thursday and deployed massive contingents of police and soldiers in an attempt to prevent election day violence. Insurgent groups, including those affiliated with al-Qaida, have vowed to disrupt the vote.

In Sunni-dominated Anbar province, a one-time al-Qaida stronghold where the group has tried to make a comeback in recent months, 40,000 to 45,000 Iraqi troops and policemen were set to take part in election day security measures, said Lt. Gen. Abdul Aziz Mohamed al-Obaidy, the commander of Iraqi forces in the province.

Those troops will man two rings of checkpoints, with the Iraqi army on the outer perimeter and the police closer to the polling sites.

As elsewhere, streets will be cleared of virtually all vehicle traffic. Soldiers and police will wear specific badges to thwart anyone wearing stolen or fake uniforms, a ploy used in previous bombings in Baghdad.

Female nurses will be present at the province&#8217;s roughly 300 polling stations to search women. In the past, bombers have included women and men in drag. There will also be undercover officers watching for anyone acting suspicious at election centers.

At the U.S. Camp Fallujah, an officer said intelligence reports continued to indicate that insurgents were planning to attempt further attacks during the elections.

&#8220;The reports show ordnance coming into the area prior to the election,&#8221; said Capt. Barron Moffitt, commander of Company C, 2nd Battalion, 504th Parachute Infantry Regiment. &#8220;While all the reports can&#8217;t be verified, it still warrants some amount of concern.&#8221;

U.S. troops, who have helped develop security plans in recent months, will play a supporting role as voters go to the polls, officials said.

Col. Mark Stammer, commander of the 1st Brigade, 82nd Airborne Division, said Iraqi commanders in Anbar have mostly asked for help with surveillance drones and satellites, as well as equipment such as blast walls and concertina wire.

&#8220;We are going to try to complement all of the strengths of the Iraqi army and Iraqi police with what we can bring in,&#8221; he said.

U.S. troops will also be ready with quick-reaction forces that could deploy at the request of the Iraqi military but will otherwise not be visible, Lt. Col. Eric Bloom, a military spokesman in Baghdad, said.

U.S. Provincial Reconstruction Team civilians will be among the 500 to 600 international monitors watching the vote. U.S. officials hope to avoid a repeat of last year&#8217;s Afghan elections, which were undermined by widespread fraud.

President Jalal Talabani, a Kurd, told the BBC last week that he believed the election would result in a ruling coalition involving al-Maliki&#8217;s Dawa Party, the other main Shiite parties and the Kurds. Other politicians have floated a variety of scenarios, including a coalition between al-Maliki and Allawi.

A new version of the broad-based national unity government currently in power is another possibility, though that government has proven badly divided and unable to grapple with controversial subjects such as the allocation of oil money and the extent of regional autonomy.

Stars and Stripes reporter Seth Robbins contributed to this report from Anbar province.