Iraqis getting a few final bursts of training 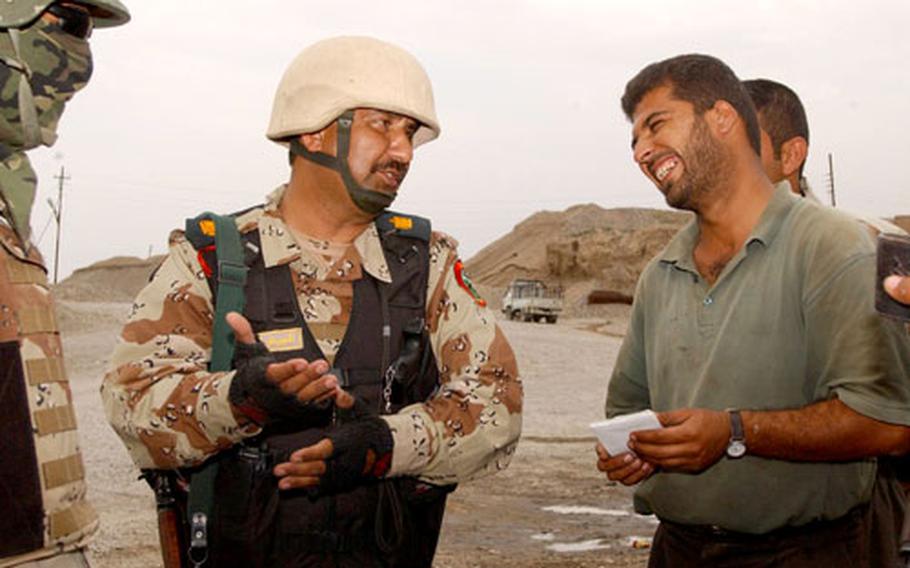 Iraqi Maj. Saleh talks to a local man about two weapons found by Iraqi and U.S. troops during a search. (Jeff Schogol / S&S)

Iraqi Maj. Saleh talks to a local man about two weapons found by Iraqi and U.S. troops during a search. (Jeff Schogol / S&S) 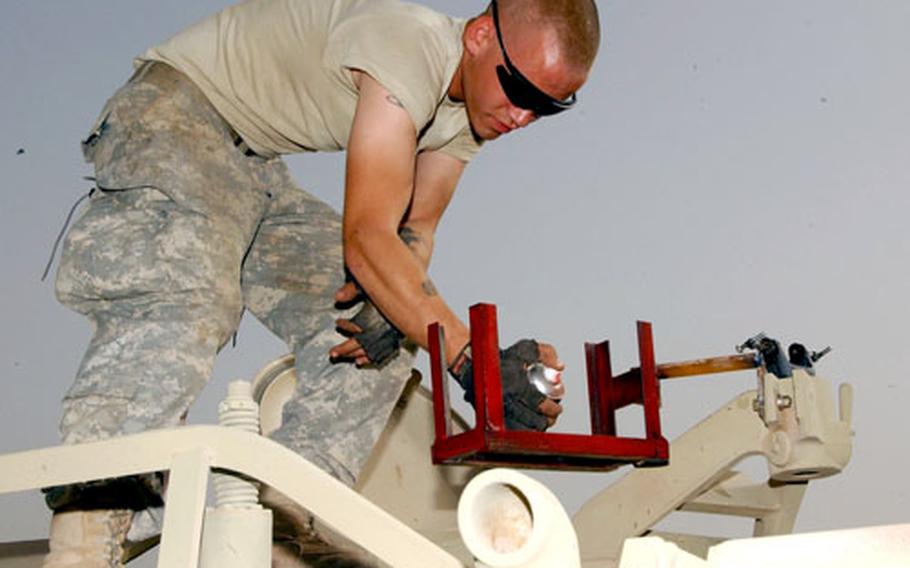 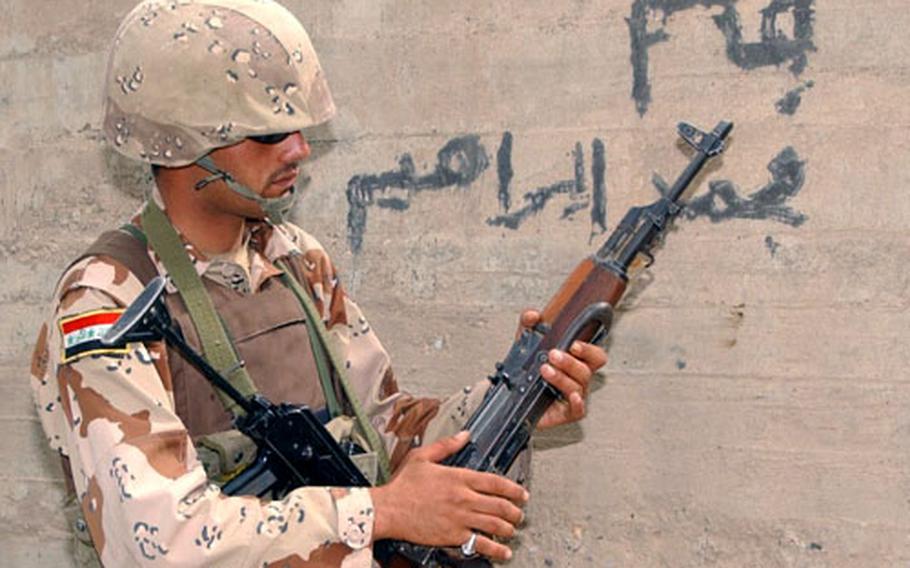 An Iraqi soldier eyes an AK-47 found by Iraqi troops during a search. (Jeff Schogol / S&S) 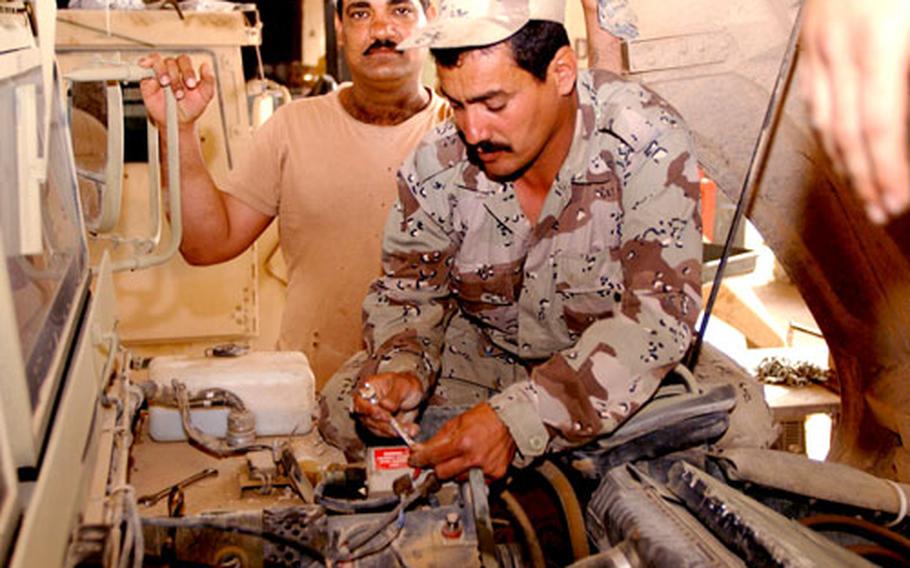 Editor&#8217;s Note: This is the first of a two-part series on how U.S. troops at FOB Normandy are training Iraqi security forces.

The unit, part of the 101st Airborne Division and based at Fort Campbell, Ky., is scheduled to leave this fall, meaning the Iraqis will largely be on their own, said Capt. Mike Erlandson, 28, of Philadelphia.

Cognizant of the unit&#8217;s approaching departure date, U.S. forces want to make sure they do everything they can to ensure that Iraqi security forces can stand on their own, said Maj. Jeffrey French, 37, the unit&#8217;s executive officer.

The goal is not to have U.S. or Iraqi troops kill all the bad guys, but to have Iraqi troops conducting missions by themselves while U.S. troops provide supervision, said French, of Fort Campbell, Ky.

French said Iraqi units are on track to becoming self-sufficient, but some will take longer than others.

One unit that falls into the second category is the 3rd Battalion, 3rd Brigade, 5th Division of the Iraqi army, which took a major beating in one battle and has been sent to FOB Normandy to be reequipped and retrained, he said.

French said the soldiers in the Iraqi battalion first receive training on base, then go on missions with U.S. troops, and then partner with an Iraqi unit that has been self-sufficient for some time.

Going out on a missionOn this day, members of the battalion are going out with U.S. troops to see if local Iraqis know anything about recent attacks on FOB Normandy.

As the Humvees pull into an Iraqi rock quarry, U.S. troops form a defensive screen and Iraqi soldiers look for someone in charge to talk to.

The Iraqis are led by Iraqi army Maj. Saleh, who goes by his just first name for security reasons. He initially lets his U.S. adviser do most of the talking to local Iraqis.

But Saleh proves a quick learner and becomes more assertive, asking another Iraqi about an AK-47 that Iraqi troops turn up during a search.

The role of U.S. troops is to provide advice to help the Iraqis do their job, Cowen adds.

This advisory role is on full display during one search when Iraqi troops find a pistol and a U.S. soldier finds a hidden AK-47.

Two Iraqi men claim they own the weapons but don&#8217;t have their identification.

Cowen and Lt. Col. Lee Jones, of the 335th Military Transition Team, suggest to Saleh that he confiscate the weapons and allow the men to reclaim them once they&#8217;ve found their identification.

Jones then shows Saleh how to write a receipt for the weapons as a U.S. sergeant tells Saleh to have two of his men search for other possible concealed weapons.

Asked if he worries about undercutting Saleh&#8217;s authority, Cowen said Iraqi officers and officials have been receptive to advice from U.S. troops.

Refurbished equipmentAmid the discarded hulks in the junkyard at FOB Normandy, U.S. troops have managed to salvage armored vehicles for the Iraqi army to give them some extra protection, said Sgt. Michael Ashbrook, 31, of the 329th Field Artillery Battalion.

Ashbrook, of Huntington Beach, Calif., said his men have refurbished 16 armored personnel carriers and one howitzer for Iraqi troops in a little over a month.

Ashbrook said he does not know how long the vehicles have been in the junkyard, but some of them had Iranian flags painted on them, so he assumes the Iraqis captured them during the Iran-Iraq War.

He said U.S. troops take the vehicles that look like they are in the best shape and get to work making them ready for Iraqi troops, while the rest of the vehicles in the junkyard supply spare parts.

The Santee, S.C., native said he frequents the junkyard to make mounts on the Iraqis&#8217; recently acquired Humvees so they can fire both Russian- and U.S.-made weapons.

King said the Iraqi troops have been overwhelmed to get Humvees because until January, they had been driving in unprotected Nissan pickup trucks.

On this day, two Iraqi mechanics train with a U.S. sergeant on how to repair a Humvee engine.

King said the introduction of Humvees into the Iraqi army is an important step because Iraqi troops are safe inside &#8220;instead of getting blown up in a damn pickup truck.&#8221;

&#8220;The Communist Party of Thailand lasted nearly 40 years before it faded away around 1990; the Philippines partnership with the U.S. reaches 60 years in July 2006 on the anniversary of its independence from U.S. rule; and U.S. advisers trained and operated with El Salvadoran forces for more than 10 years before the Farabundo Marti para Liberation National (FMLN) signed a peace treaty in the early 1990s,&#8221; Petraeus said in a Wednesday e-mail to Stars and Stripes.

Petraeus said U.S. advisers have a complicated role. Not only do they have to train and equip security forces within the constraints, but they must work within socio-economic norms, he said.

&#8220;Tribal culture and heritage in Iraq are part of the social and cultural framework that drives such core values as loyalty; these core underpinnings must ultimately support the long-term direction of the new nation,&#8221; he said.

Another role for U.S. advisers is to build trust between a host nation and its people, he said.

&#8220;In the final analysis, it&#8217;s the legitimacy of the host nation government in the eyes of the people that disables insurgencies and leads to success,&#8221; Petraeus said.