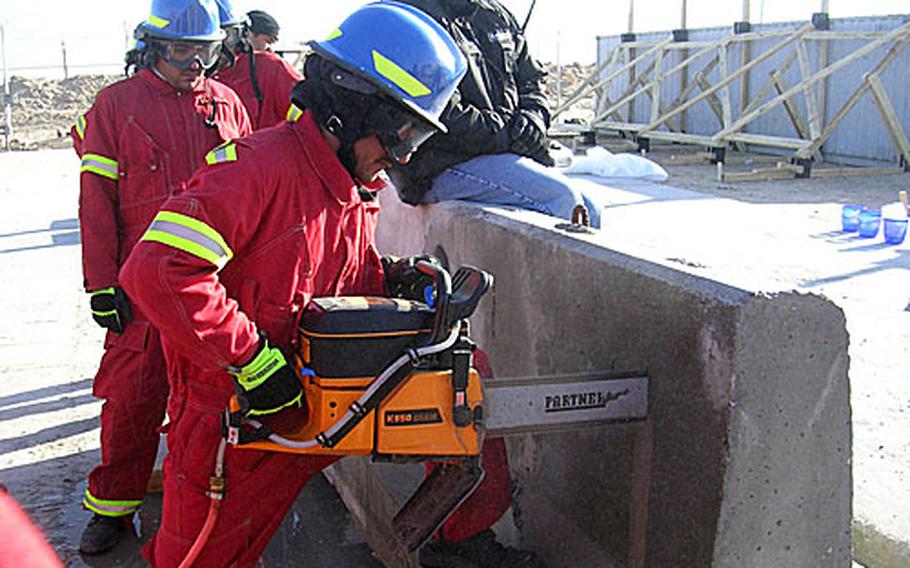 Iraqi firefighters learn how to bore through concrete to rescue people from collapsed buildings. (Photo courtesy of the Civilian Police Assistance Training Team)

Iraqi firefighters learn how to bore through concrete to rescue people from collapsed buildings. (Photo courtesy of the Civilian Police Assistance Training Team) BAGHDAD &#8212; The Iraqi government is striving to improve the nation&#8217;s civil defense program, which has suffered from little or no training and poor funding.

The Ministry of Interior budgeted $320 million for civil defense in 2007, up from $180 million the year before.

Roughly 19,000 firefighters operate out of 240 stations nationwide. The number of firefighters is expected to grow to 42,000 by mid-2008, and in the next several months, the directorate general plans to increase the number of stations to 287.

Many of the firefighters coming on board will have little or no formal training, especially in tasks such as rescuing people from collapsed buildings and confined spaces, which is a critical skill because of bombings by insurgents.

&#8220;We&#8217;ve got a techniques course to teach them how to operate in that environment,&#8221; Gale said. &#8220;How to use borescope cameras and microphones and look for signs where someone might be buried, versus mucking through debris and hoping for the best, as they do now.&#8221;

Many firefighters will be hired without training, Gale said.

Emergency medical technicians and personnel operating ambulances fall under the Ministry of Health and are separate from civil defense operations.

About 1,000 of the nation&#8217;s 19,000 firefighters received formal training in Bahrain recently, Gale said, and roughly 300 to 400 officers are expected to receive training either in Oman or Jordan in the near future.

They are expected to train the rest of their crews, Gale said. Training also is planned for basic first aid and handling hazardous material.

CPATT plans the training and is working to develop a standard training curriculum and national response plan.

There is no federal system in place and provincial governments are hesitant to give up control within their jurisdictions. Still, CPATT and the Ministry of Interior are seeking accreditation from the International Fire Service Accreditation Congress.

Under the accreditation plan, a firefighter in Basra would meet the same standards as one working in Mosul, said Gale, who has 24 years in the fire protection and emergency management system.

Civil defense officials had plans to build a firefighting academy in Baghdad but the project was placed on hold after a $26 million grant was allocated to a children&#8217;s hospital in Basra instead, Gale said.

Still, future plans call for establishing a $40 million academy in Baghdad and satellite academies in the southern and northern parts of the country.

The solutions, for now, only scratch the surface of what the program needs, Gale said.

The British opened the first civil defense fire station in 1927. The Shekh Umar Station now serves as a fire station and the maintenance facility for the Civil Defense Directorate. After Saddam Hussein was ousted, fire stations were looted and some firefighters took home fire engines, gear, and other equipment to save them, Mustafa said.

Looters complicated the problem by setting fire to buildings. Without firefighting equipment, people were hard pressed to quell the blazes.

The first responders are often attacked and killed in the violence in Iraq. A total of 140 have died from sniper attacks and bombings, Mustafa said.