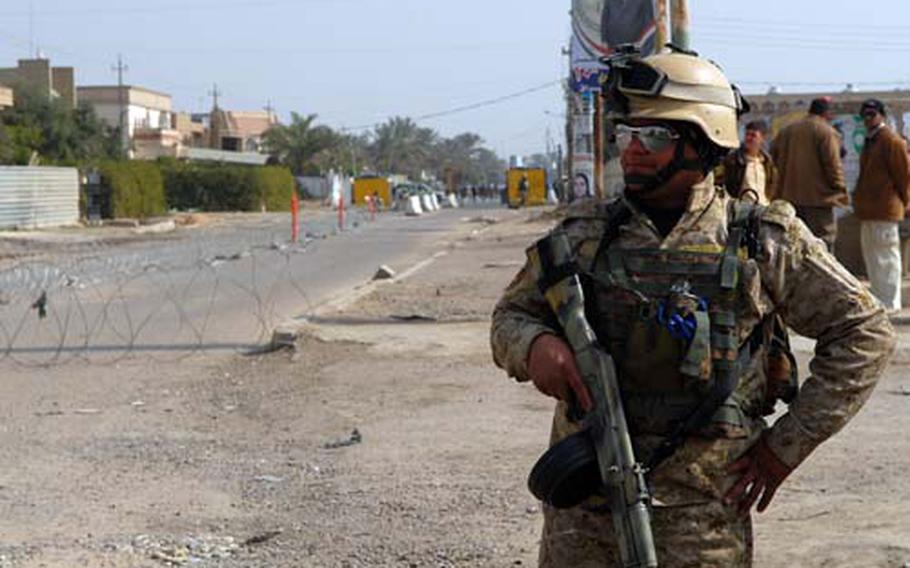 BAGHDAD &#8212; Iraqis in the capital greeted their first elections in four years with family strolls to polling sites and a relaxing afternoon with friends.

A holiday spirit, not violence, prevailed as voters headed to the polls for Iraq&#8217;s provincial elections.

Isa Hussein was enjoying the spirit in the air Saturday while escorting his two daughters to a Ghazaliyah polling station, while his neighbors lounged on lawn chairs with ink-stained fingers.

"Today is a big difference compare to 2005," Hussein said. "Today is a good step forward to the future."

Streets were empty of cars and trucks due to a vehicle ban aimed at protecting election sites from car bombs. That left local residents plenty of space to play on streets normally congested with Baghdad&#8217;s growing number of vehicles. All along Haifa Street, boys got together for pick-up soccer games.

The day was perhaps the biggest success for the Iraqi security forces. As of 5 p.m., insurgents had not mounted any attacks in Baghdad, according to Multi-National Division-Baghdad.

As the day wore on, Iraqi soldiers across the city talked about their jobs with more and more animation. Soldiers watching voters trickle past their checkpoints into polling stations without incident couldn&#8217;t help but feel responsible for the day&#8217;s success.

"They feel safe, so they have the motivation to vote," said Pfc. Jalal Hassan, who&#8217;d been watching over his Ghazaliyah checkpoint for the past three days.

Iraqi forces did make several arrests throughout the day. The Iraqi National Police arrested three people for voter intimidation at the Hamza school election center in Rasheed. They also arrested two people with fake IDs who were posing as election officials, and they arrested an unaligned Shiite extremist who specialized in rocket-propelled grenade attacks, officials said.

There was also an unconfirmed report of small-arms fire in the northern part of Sadr City, which is off limits to U.S. soldiers.

"Because of the election, they are trusting in the Iraqi security forces and the government. We are improving day after day, year after year," he said.

At times, the Iraqis could be too strict, though. American 2nd Lt. Christopher Fields &#8212; a platoon leader in D Troop, 4th Squadron, 10th Cavalry Regiment &#8212; said Iraqi soldiers initially stopped even those cars that had permission to be on the road.

On a more serious level, an Iraqi military spokesman said Iraqi security forces opened fire on people who tried to carry cell phones into a polling station, killing at least one person.

Staff Sgt. Michael Fournier, a squad leader in a platoon that focuses on capturing wanted insurgents, was enjoying watching Ghazaliyah voters pass by his checkpoint while a fellow soldier kicked around a soccer ball with a young boy.

"It&#8217;s kind of good to break the monotony, change up the pace," said Fournier, a soldier in 5th Squadron, 4th Cavalry Regiment. "I think it&#8217;s a community effort, people coming out to vote."

Despite the security successes, lines were short at the polls. It&#8217;s not clear whether that&#8217;s because of low voter turnout or because people just visited the polls through the day. The Iraqi government kept the polls open for an additional hour, and Prime Minister Nouri al-Maliki ordered the roads opened to vehicles about 4 p.m. to encourage voting.

With elections complete, the country still has several challenges ahead. The government will spend the night transferring ballots to where they can be counted. Preliminary results could be released in as little as three days, but then a lengthy period will follow so the government can respond to legal challenges. It could be late February before official results are out. With several of the established parties likely to lose seats, the situation is ripe for discord.

Yet, Baghdad residents are already celebrating the day as a big step toward the peaceful Iraq they once knew.

"This will be a new era for Iraq," said Hussein Achmet, a Ghazaliyah resident who was relaxing near a voting site, "and we have hope that things will be better."