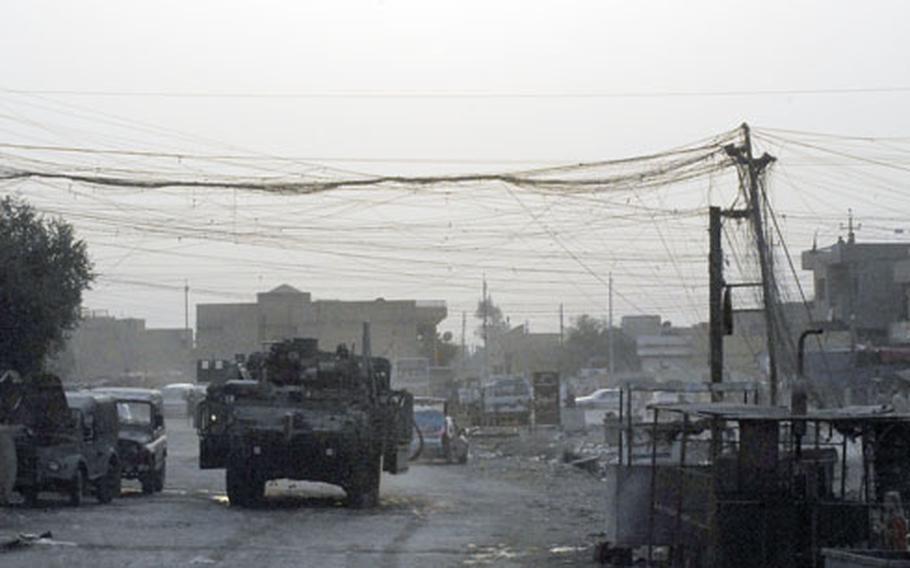 Buy Photo
A Stryker from the 1st Battalion, 27th Infantry Division passes under power lines in Istiqual, Iraq, near Sadr City, in September. U.S. forces here have complained to locals about the makeshift lines and the danger they pose. U.S. commanders say locals split and reroute power lines to provide electricity to their homes. (Photos by Leo Shane III/Stars and Stripes)

Buy Photo
A Stryker from the 1st Battalion, 27th Infantry Division passes under power lines in Istiqual, Iraq, near Sadr City, in September. U.S. forces here have complained to locals about the makeshift lines and the danger they pose. U.S. commanders say locals split and reroute power lines to provide electricity to their homes. (Photos by Leo Shane III/Stars and Stripes) 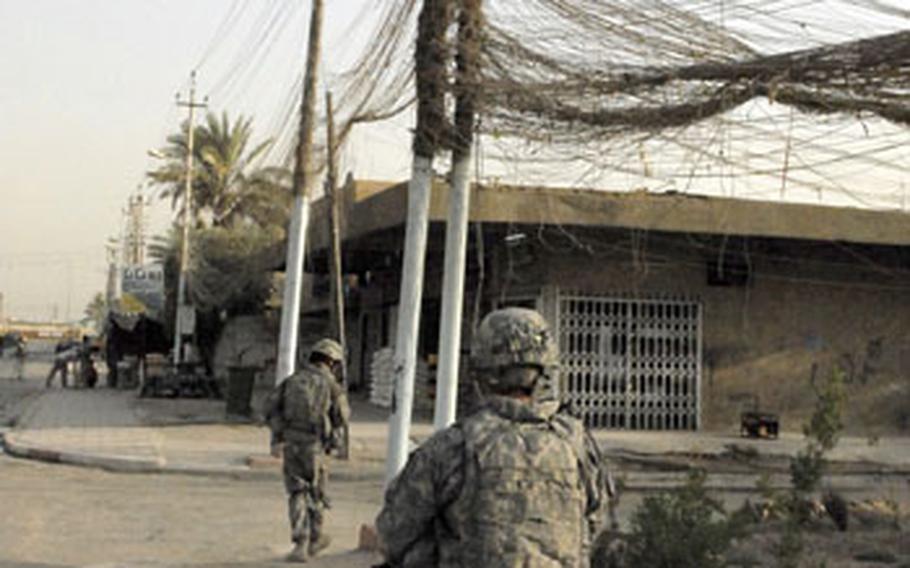 Troops from Company A, 2nd Brigade, 4th Infantry Division patrol a street in the Doura neighborhood of Baghdad in August, below a tangle of power lines. ()

Enterprising locals have, indeed, tried to make money off the shortages by setting up private generators and selling power on their own. But these entrepreneurs have so far been unable to meet electrical needs in the same way that small stores and kiosks fulfill consumer demand.

This is partly because there are not enough Iraqis who can afford the initial investment required to buy a generator large enough for multiple homes, said Tarick al-Khazraji, an English-speaking contractor and engineering consultant who&#8217;s worked with Iraq&#8217;s power grid since the Saddam Hussein era.

Power from private generators also costs more than power from the American-donated generators because the owners expect to make a profit. Iraqis also frequently complain that generators are off longer than they are supposed to be because they have no way to ensure they get the full six to eight hours of power they pay for.

In the minds of many soldiers and Iraqis, private generator operators are like black market fuel sellers: They provide an important service, but they aren&#8217;t really legitimate.

For similar reasons, Iraqis have so far proved unable to launch their own cooperative ventures like the agriculture co-ops that aided farmers in the American West. Al-Khazraji said neighbors simply don&#8217;t trust each other enough to chip in for a generator and then divvy up the power.

That leaves the Americans to create generator projects that are essentially government-run co-ops. They donate the generators to the neighborhood council and provide three months of fuel and maintenance. After three months, the council takes full responsibility for the generator.

The Americans also train generator operators to guard and oversee the machines &#8212; an initiative that provides a few extra jobs for the communities and shifts responsibility to the Iraqis. The operators fuel the generators, maintain them and fix them when they break. Many of these operators are former "Sons of Iraq" members.

The neighborhood councils will examine the costs of running the generator and then set the price of electricity, so prices will vary from neighborhood to neighborhood. Advisers with the 1st Brigade Combat Team, 4th Infantry Division expect electricity to cost about $4 per amp each month in Baghdad&#8217;s Rashid district. Residents in Rusafa &#8212; which is overseen by 3rd Squadron, 89th Cavalry Regiment &#8212; will pay 9,000 dinars, or about $7.50, per amp.

In both places, most homeowners will probably buy five amps. That will run a refrigerator, a few lights, a fan and perhaps a "desert cooler," which circulates cool air but isn&#8217;t a true air conditioner.

"They are so happy with that because they know the generators are going to serve the people," said Fadal Salah Hamood, an engineer and neighborhood council representative.

Yet the generators are far from a perfect solution. They require extensive maintenance &#8212; the reason why the Americans placed so much emphasis on training operators. Neighborhood councils have never overseen such a project either. And depending upon its size, a generator generally provides electricity to just 150 to 300 homes, while Baghdad has as many as 7 million people.

Hamood said the five generators his area may get aren&#8217;t enough for the 2,100 houses there. Only those living closest to the generators will be able to buy power because the low-voltage electricity drops off rapidly the further it travels from the generator.

All the money is supposed to be plowed back into the generator to keep it running and keep prices low, but some worry that generator operators will require kickbacks or sell some of the fuel on the black market.

Not used to paying

Even if that doesn&#8217;t happen, the arrangement requires a new mindset. Iraqis have historically received free electricity &#8212; an often overlooked part of the country&#8217;s power problem. The new generators must be self-supporting.

Most Iraqis don&#8217;t have a problem paying for electricity, but some residents in the 3rd Squadron, 89th Cavalry&#8217;s area found it so bizarre that they complained to the Americans that the neighborhood council was ripping them off. The soldiers had to explain that the generators required money to continue running.

In the end, generators are an inefficient, highly localized solution compared to a massive power plant.

"These are a stopgap measure because we know it&#8217;s going to take years to fix that grid," said Col. Craig Collier, the 3/89 commander.

About 340 miles southeast of Baghdad, there&#8217;s a building going up near the city of Basra. This one will be much larger and grander than the modest generator huts that house generators around Rashid. It will house a massive power plant that will open up a whole new source of electricity to Iraq&#8217;s capital.

That plant is at least two years away from completion, though, and it&#8217;s far from certain that it will be ready before the existing plant produces its last volt.

How much do Iraqis pay for electricity?

Duration: As little as a couple of hours in the summer and as many as eight hours in the winter, although power may be broken up throughout the day.

Duration: Generally six or eight hours on top of whatever the national power grid offers.

Duration: Generally six or eight hours on top of whatever the national power grid offers.

Duration: As long as the owner wants to pay for fuel.

Cost: About $300 a month to run a small, home-sized generator for several hours a day.