Iraqis drink up as life returns to liberated Mosul Buy Photo
Yazidi Khiri Elias sells alcohol from a small shop in Bashiqa, Iraq, Monday, March 6, 2017. The village near Mosul was liberated in early November. Some families and businesses have begun returning, despite a great deal of destruction caused by fighting to oust Islamic State fighters who had held it since 2014. (Chad Garland/Stars and Stripes)

Buy Photo
Yazidi Khiri Elias sells alcohol from a small shop in Bashiqa, Iraq, Monday, March 6, 2017. The village near Mosul was liberated in early November. Some families and businesses have begun returning, despite a great deal of destruction caused by fighting to oust Islamic State fighters who had held it since 2014. (Chad Garland/Stars and Stripes) 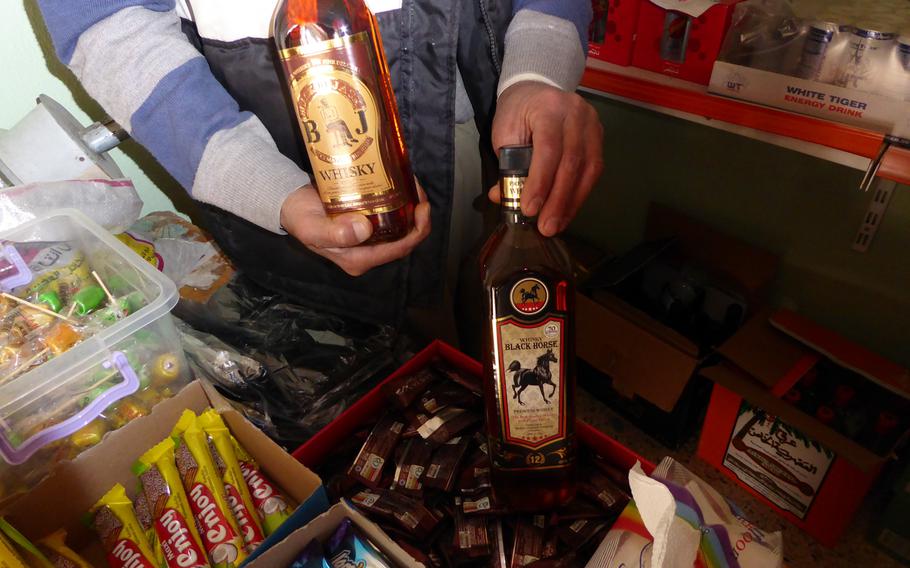 Buy Photo
Khiri Elias shows off Black Jack and Black Horse whiskey bottles that he sells from a small shop in Bashiqa, Iraq, Monday, March 6, 2017. The village, known as "little Iraq" because its diverse population is a microcosm of the country, was liberated from roughly 2 1/2 years of Islamic State occupation in November and is slowly coming back to life. (Chad Garland/Stars and Stripes) 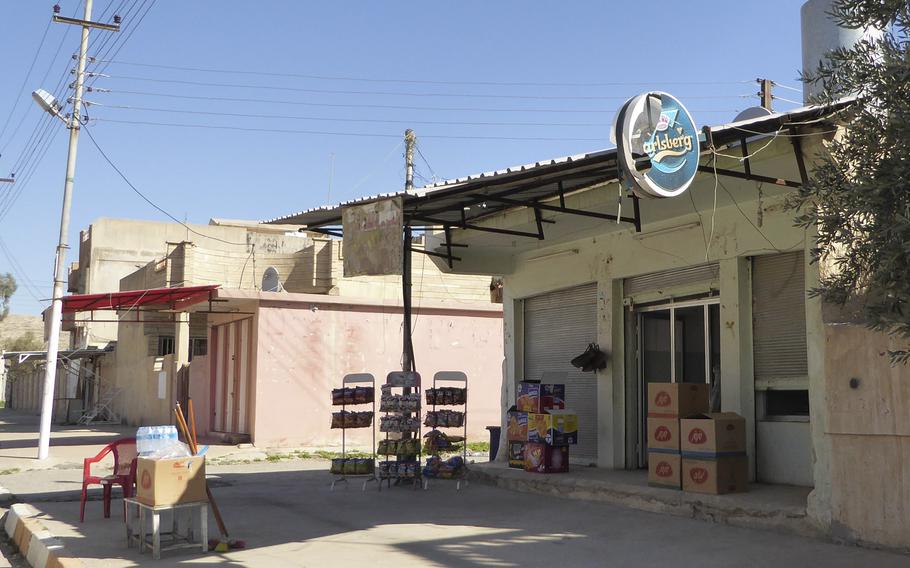 Buy Photo
Khiri Elias, a Yazidi man pictured here runs a small shop in Bashiqa, Iraq, Monday, March 6, 2017, He said one of his most popular products is alcohol, including arak, an anis-flavored liquor the village was once known to produce. (Chad Garland/Stars and Stripes) 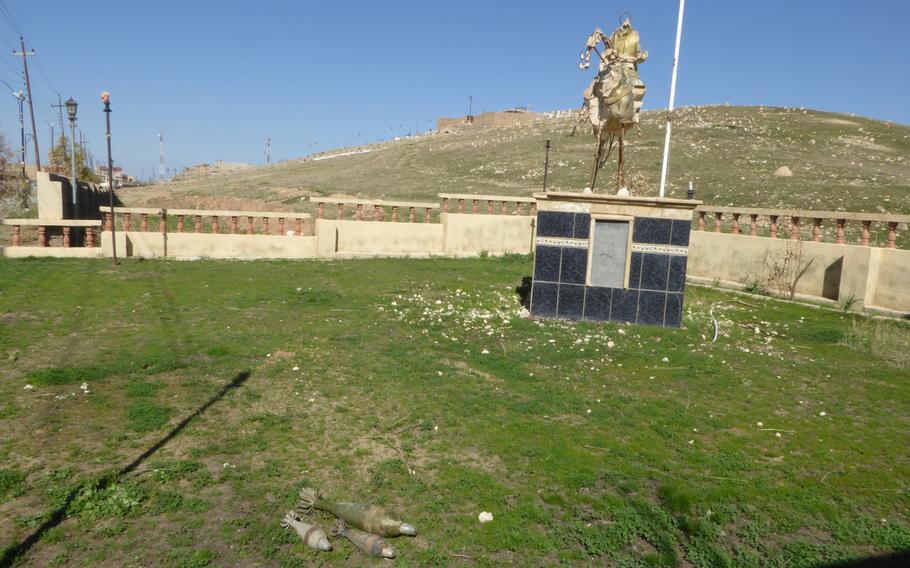 Buy Photo
Mortars lie in the grass in front of a destroyed statue of a Yezidi hero in Bahzani, Iraq, Monday, March 6, 2017. (Chad Garland/Stars and Stripes) Buy Photo
Hookah pipes stand in front of Bassam Makhmoud's shop, across from a destroyed house in Bakhzani, Iraq, Monday, March 6, 2017. Many buildings in the village were destroyed in the fight to liberate the area from the Islamic State group, which held it for roughly 2 1/2 years until it was liberated in November. (Chad Garland/Stars and Stripes) 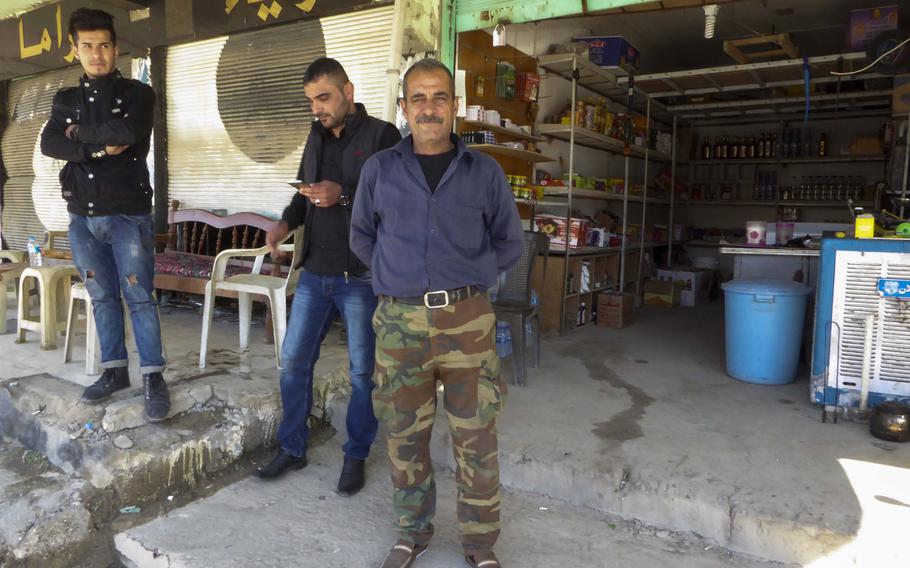 Buy Photo
Bassam Makhmoud stands in front of a shop in Bahzani, Iraq, Monday, March 6, 2017. Makhmoud sells snacks, sodas and some tools, but the most popular item in this village, where life is returning after being liberated from the Islamic State group, is alcohol. The village was once known for producing the anis-flavored liquor called arak. (Chad Garland/Stars and Stripes) 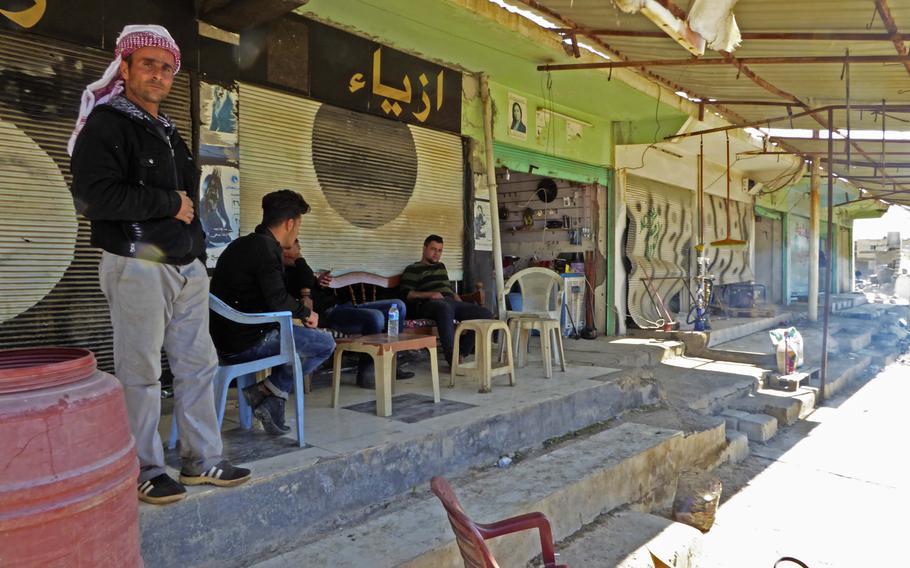 Buy Photo
Mulasm Ali stands in front of a shop where Bassam Makhmoud sells snack items, cigarettes and alcohol in the village of Bahzani, Monday March 6, 2017. The men say the village is safe, but they wonder about a future that they say could see a resurgent Islamic State group under a new name. (Chad Garland/Stars and Stripes) 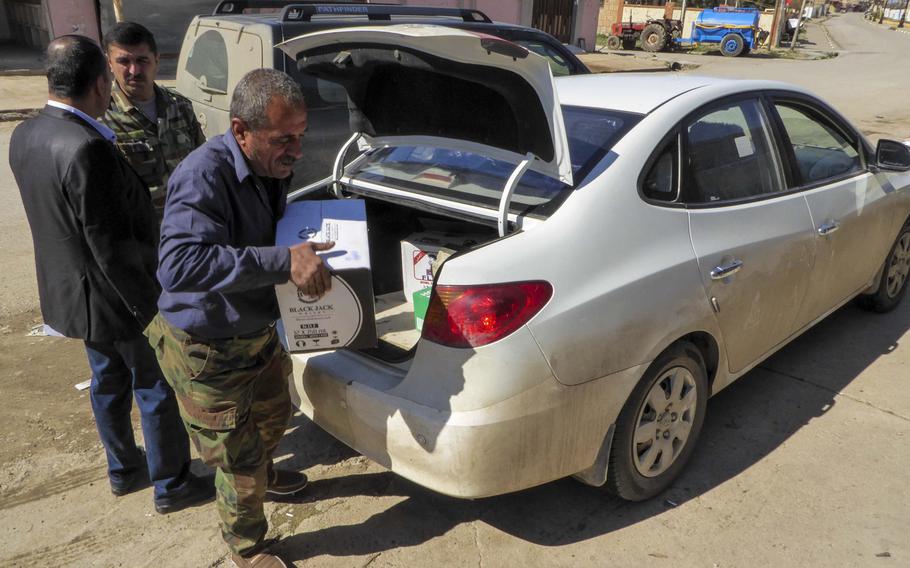 Buy Photo
Bassam Makhmoud unloads a box of Black Jack whiskey from his brother's car in front of a shop where they sell alcohol and convenience items in the village of Bahzani, Monday, March 6, 2017. The village was liberated in November, and families and businesses have begun to return to the war-ravaged community after 2 1/2 years of Islamic State occupation. (Chad Garland/Stars and Stripes) 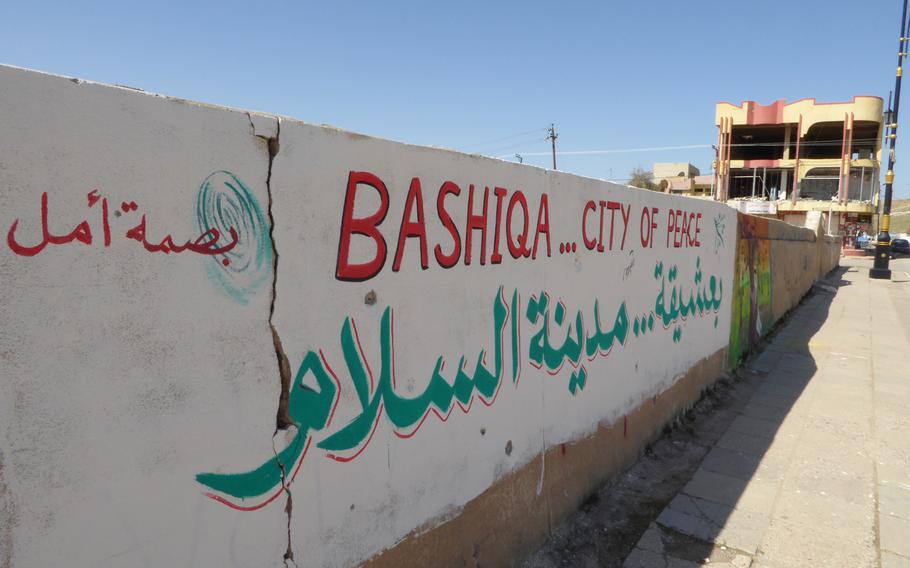 Buy Photo
A recently painted mural in the Iraqi village of Bashiqa is pictured here on Monday, March 6, 2017. (Chad Garland/Stars and Stripes) Buy Photo
A recently painted mural of a dove on a wall in Bashiqa, Iraq, Monday, March 6, 2017. The village was liberated from the Islamic State group in November. Before the militants swept in, the village was considered one of the country's more peaceful areas. (Chad Garland/Stars and Stripes) Buy Photo
A destroyed home is pictured here in Bashiqa, Iraq, on Monday, March 6, 2017. Fighting to reclaim the largely abandoned village from Islamic State fighters in fall of 2016 left many structures leveled. Water and electric service have not yet been restored, but some families have begun to return to the community. (Chad Garland/Stars and Stripes) BASHIQA, Iraq — Life is trickling back into this northern Iraq town that was cleared of Islamic State fighters in November, and so is the alcohol.

Called “Little Iraq” because of its mix of Yazidis, Muslims and Christians living together and surrounded by Shabak villages, it’s also known widely as a source of arak, a clear, anise-flavored liquor that was once made here.

The distilleries — many once located in residential homes — remain shuttered. Bashiqa and neighboring Bahzani were largely evacuated in 2014, when Islamic State militants swept in. The fighting to reclaim it reduced dozens of buildings here to rubble, and there is still no water or electricity.

But just weeks after Kurdish forces cleared it of militants, Bassam Makhmoud, a Yazidi man, returned to run his brother’s shop, where the back shelves are stocked with beer, whisky, ouzo and, of course, arak.

Iraq’s parliament banned alcohol sales last fall, but it’s still sold in the autonomous Kurdish region. And for now, at least, Bashiqa lies inside the Kurds’ defensive lines — territory subject to a dispute between Irbil and Baghdad.

It was here in November that Kurdish Prime Minister Massoud Barzani said areas outside Kurdistan’s regional boundaries that had been freed by Kurdish fighters, known as peshmerga, wouldn’t be returned to Baghdad’s direct control. Baghdad still wants the Kurds to withdraw once Mosul is liberated.

The territorial dispute is just one of many issues likely to heat up as life returns to villages and neighborhoods in Mosul’s recently liberated east. The eventual retaking of the city’s western half, where U.S.-backed Iraqi forces are battling the Islamic State group in a campaign now in its fifth month, will probably only intensify the tensions.

On the border between Bashiqa and Bahzani stands a row of pastel houses — one owned by Yazidis, one by Christians and one, now rubble, owned by Muslims. Makhmoud’s shop, which is located across from them, also sells snack cakes and sodas, security chains and padlocks, and hand tools and garden hoses for cleanup. But he said most customers come for booze and cigarettes, considered sinful, or “haram,” under Islam and forbidden under Islamic State rule.

“Some come to smoke shisha, drink tea,” Makhmoud said Monday. Sooty tea kettles warmed in a fire out front just before noon, and two hookah pipes stood near the store’s entrance, in front of a neighboring shop’s crumpled metal security doors. A few men, including a soldier, sat in a cluster of chairs nearby.

Makhmoud’s brother, who’s working to set up a second location in town, delivers the alcohol from Shekhan, a Kurdish village about 60 miles away. He brought a case each of beer, whiskey and ouzo on a run Monday morning. Except for arak, made elsewhere in Iraq, the booze is imported.

Before the Islamic State came, Makhmoud was a furniture maker, but he said the militants took all of his tools, which he thinks they used to dig tunnels to hide from coalition surveillance aircraft. The extremists took everything of value, he said, and his home was destroyed by an airstrike.

“We are like refugees in our own country,” he said. His family, among the roughly 3 million Iraqis forced from their homes by violence in recent years, now lives in a camp northeast of Mosul. He returned to the village for work and sleeps in a friend’s home.

The widespread destruction and lack of utilities have prevented most families from returning to live in Bashiqa and Bahzani. The situation is difficult in several areas on Mosul’s eastern side that have been cleared of Islamic State but aren’t yet fully habitable.

Bashiqa was once considered one of Iraq’s safer towns. Haider Dedar said he moved here from Mosul for that reason several years ago. He was forced to flee in 2014, and his two homes have since been trashed by the extremists.

“I’m Muslim, and Daesh stole my Quran,” he said, using an Arabic acronym for the Islamic State. “Laptop, camera — they took everything.”

On one of his frequent visits to Bashiqa to check on his homes and the cleanup in the village, he stepped into a shop in a building with a damaged Carlsberg beer sign still hanging out front, a few hundred yards from a peshmerga checkpoint.

The shop owner, Khiri Elias, a Yazidi man, opened the store about a month ago. Elias said his biggest sellers are candy, cigarettes and alcohol, which he said he sells mostly to Muslims, both security forces and civilians.

“We’re back to our life,” he said. “We drink and sit, like before.” Some of his customers drink to calm their frayed nerves so they can sleep, he said. But Elias says he himself isn’t worried about militants returning to the village.

In his shop across town, Makhmoud expresses no fear about selling alcohol and cigarettes, though he said the Islamic State might one day return under a new name, just as the group was spawned from the remnants of al-Qaida in Iraq.

At the end of the block, mortar shells lay in the grass in front of a gunfire-damaged statue of a Yezidi horseman. Nearby, a man turned soil in a flower bed in front of a whitewashed wall where people had recently painted pictures and slogans in bright colors. Several walls in the city bore fresh murals painted over Islamic State graffiti.

“Bashiqa ... City of Peace,” read the writing on one wall, painted in both English and Arabic. “We are back and we’re staying,” read another, in Arabic.

Makhmoud said he returned not only because he needed the income but because he felt he had to do so.

“This is my village,” he said. “If I didn’t come back, who would come back? We need to gradually come back … to bring back life.”