Election officials reported low turnout in Baghdad on Sunday morning amid a series of explosions but said turnout increased as the day went on. Initial reports from elsewhere in Iraq indicated strong turnout, though it may be a day or two for the official numbers. (Michael Gisick / S&S)

Election officials reported low turnout in Baghdad on Sunday morning amid a series of explosions but said turnout increased as the day went on. Initial reports from elsewhere in Iraq indicated strong turnout, though it may be a day or two for the official numbers. (Michael Gisick / S&S) 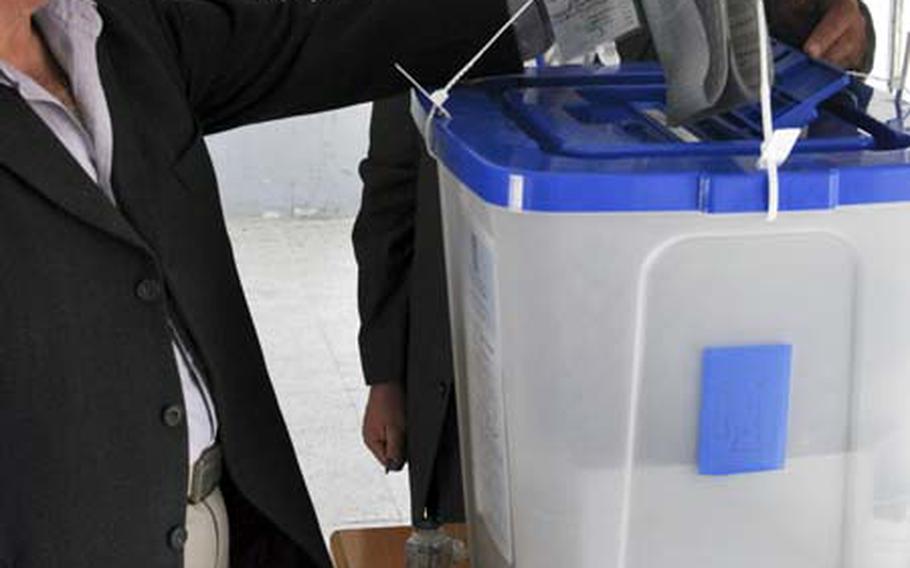 Aziz Mohamed casts his ballot at a polling place on Sadoon Street in eastern Baghdad. Mohamed, a Kurd, said he chose a cross-sectarian alliance over the main Kurdish bloc. (Michael Gisick / S&S)

BAGHDAD &#8212; An election that many Iraqis hope will prove a turning point began with a stark reminder of the past on Sunday as a series of explosions tore across Baghdad, leaving at least 38 dead and raising pillars of black smoke over the city.

But the bomb blasts and mortar attacks that came in rapid succession after the polls opened subsided as the morning wore on. With politicians from across the spectrum appealing for voters to cast their ballots, a steady stream of people appeared on the streets by early afternoon.

"We are tired of violence but we still insist on voting, despite what could happen to us," Najat Umm Muhammed said near a polling station in the al-Bataween neighborhood of eastern Baghdad. "We cannot let Iraq go to the terrorists and the Iranians."

In often defiant tones, many voters expressed a sentiment familiar in recent campaigns across the world &#8212; the desire for change.

"We are very bored of not having electricity, of not getting our pensions and of our young people not having jobs," said Suham Hamid Mahmoun, who reported voting for the Iraq Unity Alliance, a secular coalition of Shiite and Sunni parties headed by Interior Minister Jawad Bolani.

"If there is not too much cheating, we believe the right people will win," she added.

Aziz Mohamed, a Kurd, said he chose the Iraqiyya list of former Interim Prime Minister Ayad Allawi over the traditional Kurdish parties because he believed Allawi could lead Iraq past sectarian and ethnic divisions.

"I voted for the Kurdish parties last time and they didn&#8217;t do anything," he said. "I want a man who just sees Iraq without worrying about this or that sect or religion."

Iraqi television stations reported Sunday that Allawi&#8217;s list appeared to be in the lead, though the basis for those reports was unclear. Official results likely won&#8217;t be released for another day or two.

None of the main alliances contesting the election are likely to come close to a majority of parliament&#8217;s 325 seats, meaning the election will probably be followed by a period of intense uncertainty as parties vie to cobble together a ruling coalition. That process could take months and has the potential to complicate U.S. plans to withdraw thousands of troops over the summer.

With all American troops scheduled to leave Iraq by the end of next year, the elections could determine whether Iraq can forge a new political consensus or will continue to hew to the sectarian and ethnic lines that have defined the country&#8217;s politics since the 2003 U.S. invasion.

Prime Minister Nouri al-Maliki, a Shiite, faces a difficult challenge from both a more conservative Shiite coalition that includes supporters of the cleric Muqtada al-Sadr and the Islamic Supreme Council of Iraq on the one hand, and Allawi on the other.

Allawi, a secular Shiite who has gained strong Sunni support, has cast himself as the candidate who can transcend sectarian differences.

The elections went forward under extraordinary security measures. Virtually all vehicles were banned from the streets and hundreds of thousands of Iraqi soldiers and policemen were deployed across the country.

Still, the opening of the polls was quickly greeted with a dull chorus of explosions.

In the city of Fallujah in western Iraq, a series of explosions thudded in the distance even as a loud speaker urged Iraqis to head to the polls.

From atop an Iraqi police command center, U.S. Marine Staff Sgt. Chris Turbin, a member of an embedded training team, watched as smoke billowed along the horizon several minutes later.

"The fact that we still see people on the street is a good thing," he said.

By mid-day, the Iraqi commanders gathered at a train station in Fallujah for a leisurely lunch of lamb and rice, though the sound of bombs and gunfire could still be heard.

"When I walk around, I see the people, and they are comfortable," said Gen. Mustaffah Abbas al-Gazowi, commander of Iraqi forces in the city.

No one was seriously hurt in the blasts, officials said, and al-Gazowi estimated that voter turnout had reached 75 percent.

Turnout in Baghdad was difficult to estimate. Officials at several polling said it had been slow in the morning but was picking up through the day.

Some voters complained that they were unable to find their names on the rolls of registered voted maintained by each polling site.

Haithem Ali, out with his wife and two young daughters, said they&#8217;d been to two sites in eastern Baghdad but were still searching.

"We want our voice to reach the ones in power," his wife, Akbal, said. "We want change. We insist."

Despite the long walk, Haithem Ali said he was feeling optimistic as he approached a third voting site.

By Megan McCloskey, Stars and Stripes

Turnout in the Iraqi election was &#8220;as high if not higher&#8221; than expectations and violence was significantly less than anticipated, Defense Secretary Robert Gates said Sunday.

Gates called it an amazing contrast to the last time Iraqis went to the polls, saying &#8220;we couldn&#8217;t have written a script from the vantage point of March 2007 to be where we are today with the low level of violence and significant turnout for election.&#8221;

Despite fears of high-profile suicide- and car-bomb attacks, there were only a handful of incidents around the country, Gates said he was told by the U.S. commander in Iraq, Gen. Ray Odierno.

Instead, Gates said, an estimated 80 percent of the explosions in Baghdad during the morning were from what Odierno termed &#8220;bottle noise bombs&#8221; &#8211;loud explosions that did little damage.

&#8220;Al Qaeda in Iraq was forced to change their tactics,&#8221; Gates said, crediting the improved abilities of the Iraqi Security Forces.

In the south, eight out of the nine provinces did not have any security incidents, he said.

From the build-up to the election - including &#8220;campaigning that went on in the context of a peaceful environment basically&#8221; - to voting day itself, the electoral process was &#8220;an extraordinary change&#8221; from years past, Gates said.

He said this morning he was shown a classified chart that compared the week-by-week level of violence leading up to the 2005 elections compared to 2010 and the &#8220;contrast was just staggering.&#8221;

After results are finalized it could take months for the Iraqis to negotiate among the winning parties and form a government, a process Gates remarked would likely be complicated.