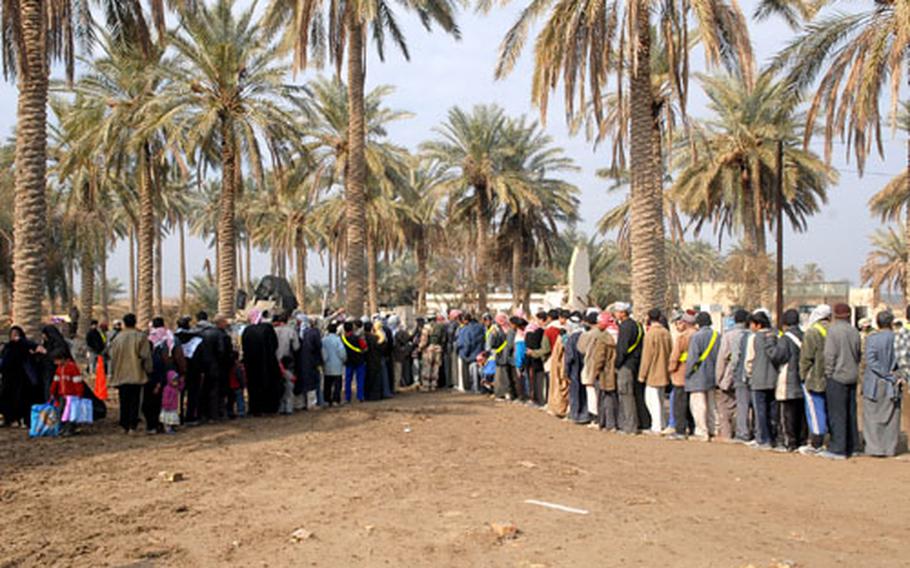 Residents of Khidr, a village northwest of Iskandariyah, line up outside a medical clinic held by U.S. troops on Monday. Much of the village was destroyed in December during fighting between U.S. troops and al-Qaeda in Iraq, the military says. (Mike Gisick / S&S)

Residents of Khidr, a village northwest of Iskandariyah, line up outside a medical clinic held by U.S. troops on Monday. Much of the village was destroyed in December during fighting between U.S. troops and al-Qaeda in Iraq, the military says. (Mike Gisick / S&S) 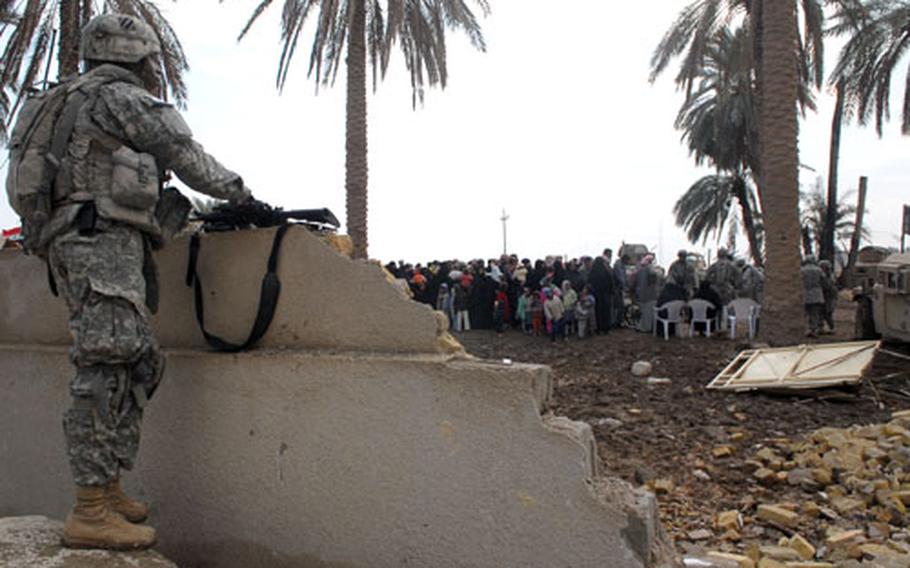 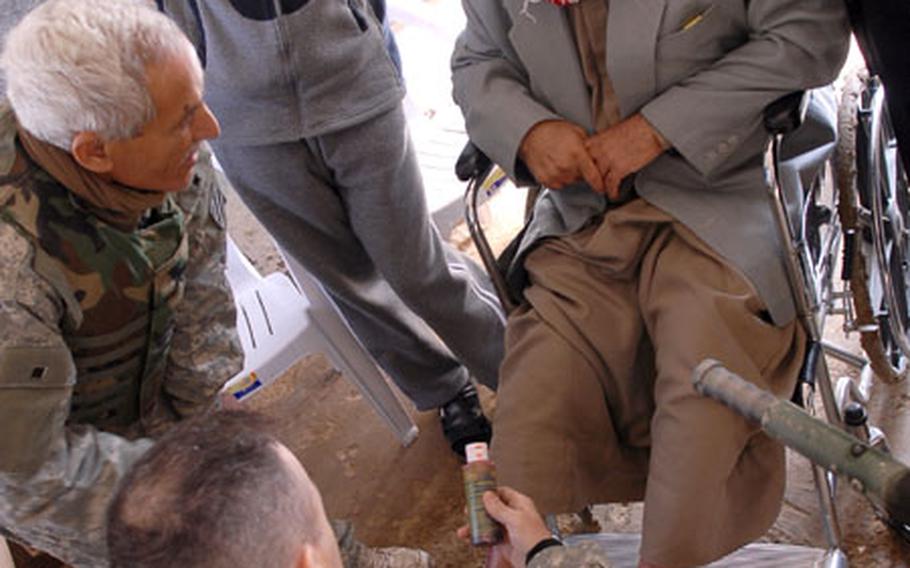 Lt. Col. Tim Monahan [bottom], 44, of Woodstock, N.Y., treats an Iraqi man who said his feet were blown off in an explosion in Mahmudiya nine months ago. Monahan, assigned to HHC, 3d Battalion, 7th Infantry Regiment, said many of the patients who came to Monday&#39;s clinic, unlike this man, were suffering from ailments brought on by poor living conditions. (Mike Gisick / S&S) 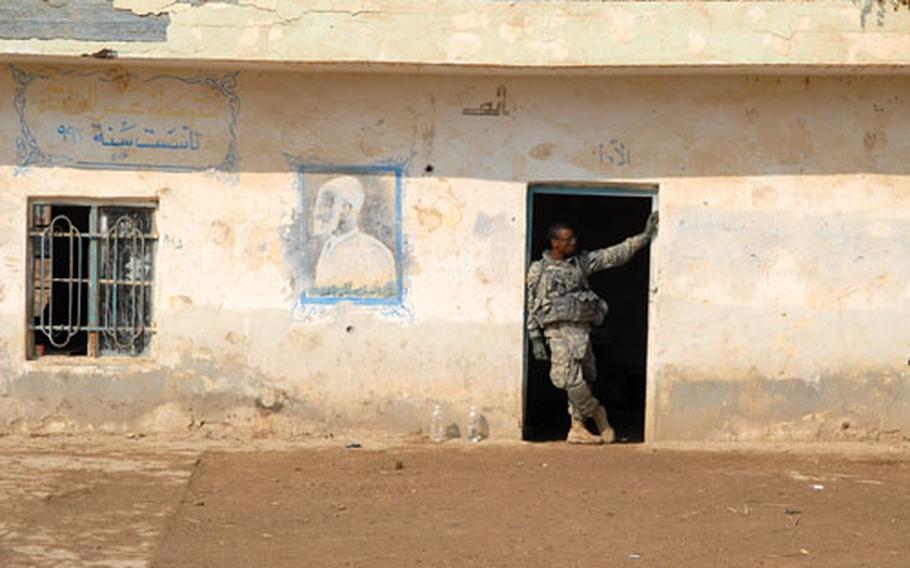 KHIDR, Iraq &#8212; An old woman wailed crazily as a man whose feet were blown off months ago was wheeled past the concertina wire. Hundreds of people, virtual refugees in their hometown, lined up amid mud and rubble for a medical clinic held by American troops in this rural village northwest of Iskandariyah.

The rubble that surrounded the crumbling schoolhouse at the center of Monday&#8217;s clinic included the remains of an Iraqi health clinic.

Like much of the town, it was destroyed late last year in fighting between al-Qaida in Iraq and troops from the Army&#8217;s 3d Battalion, 7th Infantry Regiment.

Many of the roughly 300 people who made their way to the clinic brought ailments caused by the lack of basic necessities, especially clean water, said Lt. Col. Tim Monahan, 44, of Woodstock, Conn., a dermatologist with Headquarters and Headquarters Company, 3/7 Infantry, based at Fort Stewart, Ga.

As he spoke, a man who said his feet were blown off in an explosion nine months ago wheeled toward Monahan, his raw red stumps jutting forward.

Set in a rural area surrounded by palm groves and fields, where fish-farming ponds stretch along the Euphrates River, Khidr is not as isolated as it seems, said Sgt. 1st Class Monty Ramisate, 36, also of Headquarters and Headquarters Company.

Residents are within traveling distance of seven hospitals, the Hinesville, Ga., native said, but they seem to prefer American medical care. Travel to the Iraqi hospitals is a challenge, too.

It&#8217;s Khidr&#8217;s location, relatively secluded but about midway between southern Baghdad and Babylon, that also made it an attractive target to al-Qaida, said Sheik Jaffa Hussein Denden al-Massoudi, a local tribal leader. The insurgents arrived in February, he said, and U.S. troops followed them in December.

American soldiers found a series of tunnels that they said were used by al-Qaida to hide weapons and fighters. The tunnels were destroyed by airstrikes, the military said in December.

Of the village&#8217;s roughly 1,400 former residents, a mix of Sunni and Shiite, about 500 have returned in recent weeks, al-Massoudi said.

The sheik said that only a few families, those who were helping al-Qaida, had remained behind when it took over the town. Now many of the same people are manning checkpoints as part of American-funded &#8220;concerned local citizen&#8221; groups, he said, reflecting a larger reality in what has become a linchpin of the U.S. counterinsurgency strategy.

Col. Said al-Shumari, a battalion commander with the 8th Iraqi Army Division, said an effort would be made sometime in the future to bring those who committed crimes during the reign of al-Qaida to justice. But for now, he said, the focus remained on rebuilding basic infrastructure.

As for the man whose feet were blown off, Monahan said his amputations appeared to be healing well. The best thing, Monahan told him, was to wash with soap and hot water, but the man wanted medicine.

After some negotiation, he left for the rubble with four tubes of ointment and a bottle of betadine.