Iraqis clearing bombs from Fallujah after pushing out Islamic State 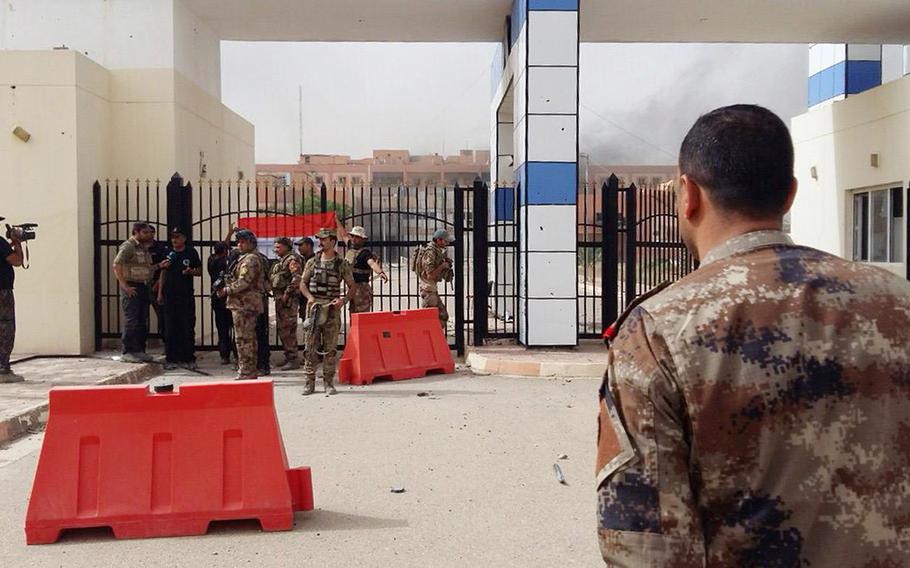 WASHINGTON — Iraq’s security forces face a steep task in clearing Fallujah of booby-traps and bombs in the coming weeks after they claimed victory Sunday against the Islamic State group, which occupied the city for more than two years.

Intense fighting early in the battle for Fallujah gave way in the middle of last week as Iraq’s counter-terrorism forces broke through the terrorist group’s strong perimeter along the city’s outskirts, Navy Capt. Jeff Davis, a Pentagon spokesman, said Monday. The Iraqis were able to clear the militants from their last stronghold in central Iraq’s Sunni-dominated Anbar Province quickly, he said.

U.S. defense officials said early last week that the city had been only about one-third cleared of militants in the hours after Prime Minister Haider al-Abadi said his troops had liberated the city. Al-Abadi’s statement was the second time in about a week that the Iraqi government claimed victory in Fallujah. But on Monday, the Pentagon concurred with his assessment.

“We can confirm the city has been cleared, and it remains under the control of the government of Iraq,” Davis said.

But much work remains. Davis said the Iraqis should expect to see occasional Islamic State group attacks on the city, but more concerning are the roadside bombs, truck bombs and house-bombs left behind by the Islamic State militants who held Fallujah since January 2014.

The house-bombs are “particularly nasty,” often rigged to blow when people enter the building to clear them, Davis said.

The U.S.-backed anti-Islamic State coalition, he said, will continue to provide the Iraqis support with airstrikes, intelligence and advice and assistance as the clearing operations continue. Davis did not say how long it could take and he had no estimate on when civilians might be able to return to the city, where the United Nations estimate 85,000 inhabitants have fled in recent months.

During the battle for Fallujah, the U.S.-led coalition provided devastating air power with daily strikes – more than 100 since the ground operation began May 21 – that targeted tactical units, fighting positions, heavy and light machine guns and rocket-propelled grenade systems. Airstrikes were also used to deny militants access to terrain throughout the fighting, Davis said.

The Iraqi commander in charge of the Fallujah operations, Lt. Gen. Abdul Wahab al-Saad told Iraq TV at least 1,800 Islamic State fighters were killed in the battle, the majority in the Operation Inherent Resolve airstrikes.

In Iraq, the Islamic State group holds slightly more than half of the territory it once did, largely around Mosul in the country’s northern region.

Local Sunni tribal fighters and Iraqi federal police, trained by the U.S.-led coalition, are expected to take control of the security of Fallujah in the coming weeks, freeing Iraqi soldiers to move north to aide in the march toward Mosul, the country’s second largest city.

“There will be great challenges going forward as they move on toward Mosul, which is the next major significant thing that we’re doing,” Davis said.

Iraqi security forces are moving “rather quickly” north along the Tigris River toward al Qayyarah, Davis said. The town is about 50 miles south of Mosul and includes a key airfield. Still, the United States is unclear how long it will take to begin a ground offensive on Mosul.

Davis said he could not say whether the Pentagon thought it could be cleared by the end of 2016.

“I think we’ll see significant operations (in al Qayyarah) going forward,” he said. “… There will be a lot of things that need to happen before we get into Mosul.”