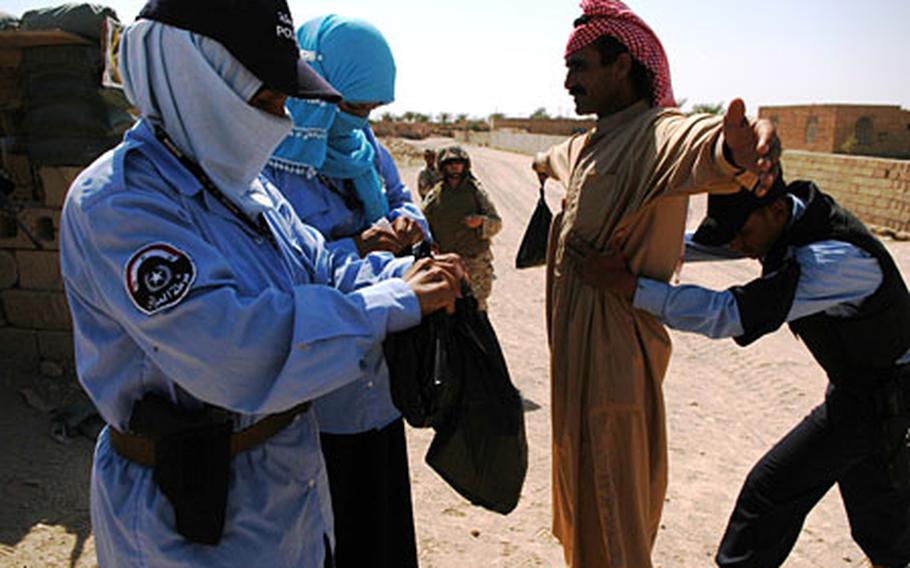 Female Iraqi Police officers help search those crossing through a checkpoint outside Ramadi. The need for women in a security role has been underscored by recent attacks by women and the cultural taboo that restricts males from searching females. (Allison Batdorff / S&S)

Manning a security checkpoint is an odd duty for a woman &#8212; especially an Iraqi woman.

But in Anbar province, women stand watch at crucial crossroads. They carry guns and add the extra layer of a police blue button-down shirt over their traditional black burqas. Their primary job is to search and question women passing through.

Her point was made in recent days as a woman with &#8220;perceived hostile intentions&#8221; was shot by coalition forces on Sept. 9 while lunging to reach behind furniture. Another woman, wearing a ski mask and carrying a rifle, was killed alongside three suspected male insurgents in the same area on Aug. 17. In February, a female suicide bomber killed 40 people and injured 50 more at Baghdad&#8217;s Mustansiriya University.

Closer to home, in Anbar province, a woman in a suicide vest blew herself up at a security checkpoint, killing seven Iraqi policemen in July.

Yet, women, swaddled in layers of bulky clothing, still breeze through male-guarded checkpoints without stopping, as men searching women is a cultural taboo.

&#8220;There was a critical need for finding women to do this job,&#8221; said U.S. Marine Corps Capt. Sean Carroll, the Iraqi security forces coordinator for South Ramadi. &#8220;Terrorists will look for weakness and exploit them.&#8221;

Unfortunately for the female IPs, doing the job is a cultural taboo also. Many receive reprisals &#8212; from being ostracized by family members to death threats &#8212; for working with the police, conspiring with Westerners and taking such a nontraditional role in Iraqi society.

That doesn&#8217;t stop them from coming to work every day &#8212; though they wear full face coverings and are not identified by name.

&#8220;We are doing an important job here,&#8221; Jenon, another IP using a fictional name, said while standing in 120-degree heat. She patted her stomach and divulged that she&#8217;s five months pregnant.

Originally from Anbar, she relocated to Baghdad but returned at her husband&#8217;s urging to police the conservative Sunni region, she said.

Newton, 43, of Chicago, also trained his unit&#8217;s first batch of female Marines, he said, but dealing with Iraqi culture gave him a sharp learning curve.

Once, he ordered his students on a 3 a.m. patrol.

Both Newton and the women want more training at the official police academy &#8212; the sooner the better &#8212; to bring them closer to cementing their place in the force.

Now, the females join scores of Iraqi police in the four- to six-month wait in the pipeline for government hiring orders. They, like the men, are being paid $65 every two weeks out of a coalition forces temporary security contractor fund.

The movement is contagious, Carroll said, as more than 20 more women have asked to join the roster.

The original 10 females are proud to be first but are looking forward to bringing other females into the fold, they said.