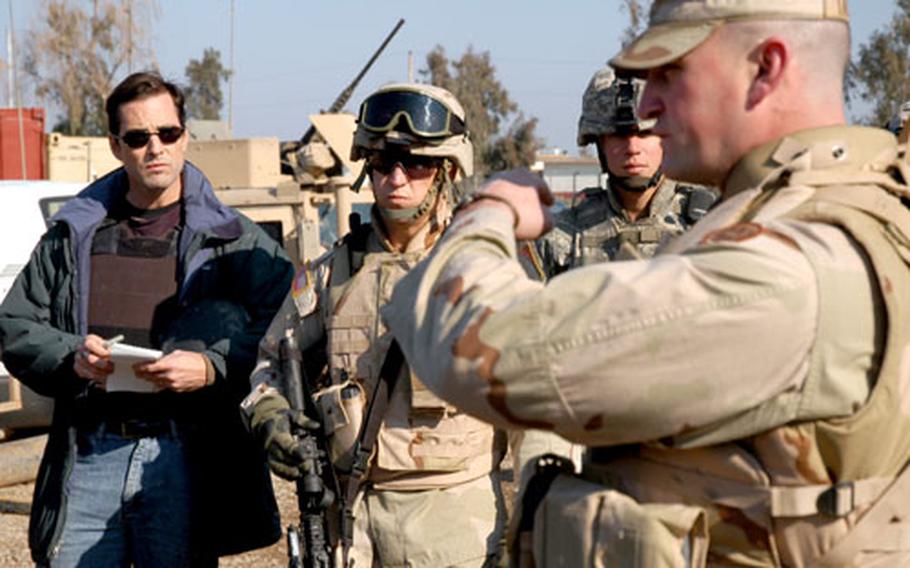 ABC News anchor Bob Woodruff, left, listens as Maj. Bill Taylor, an advisor to the Iraqi army, gives a patrol brief minutes before departing on the mission, on Jan. 29. About two hours later, Woodruff and cameraman Doug Vogt were injured by a roadside bomb near Taji. (David Olson / Courtesy of U.S. Army)

ABC News anchor Bob Woodruff, left, listens as Maj. Bill Taylor, an advisor to the Iraqi army, gives a patrol brief minutes before departing on the mission, on Jan. 29. About two hours later, Woodruff and cameraman Doug Vogt were injured by a roadside bomb near Taji. (David Olson / Courtesy of U.S. Army) 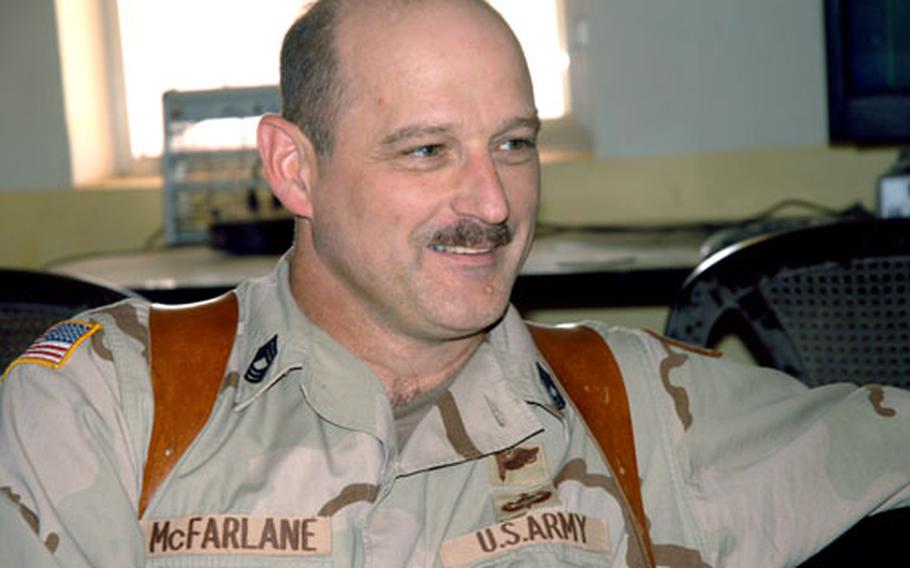 First Sgt. John McFarlane was the first American to render first aid to Bob Woodruff after the newsman was hurt in an IED attack. (David Olson / Courtesy of U.S. Army) 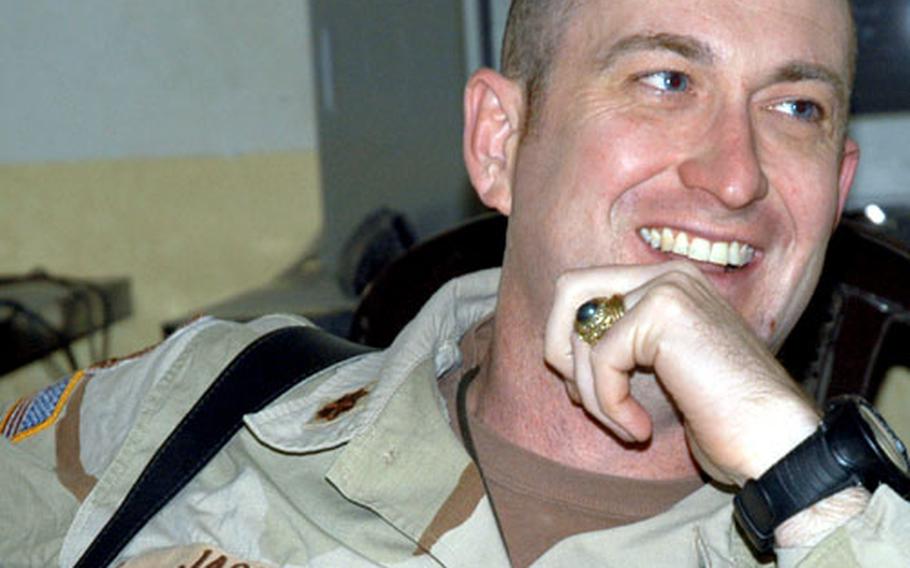 Bob Woodruff, the ABC newsman, wasn&#8217;t speaking or moving. &#8220;His eyes were fixed,&#8221; said McFarlane, the first American to reach the reporter after a roadside bomb exploded. The blast wounds to Woodruff&#8217;s face and neck were grave.

But Woodruff didn&#8217;t die in the bomb attack, or in the following hail of insurgents&#8217; AK-47 bullets on Jan. 29. The reason he didn&#8217;t, according to McFarlane and Maj. Mike Jason, advisers to the Iraqi army unit Woodruff was reporting on that day, were the Iraqi soldiers themselves.

&#8220;I saw hatches being opened and soldiers pouring out and clearing flanks and returning fire in a disciplined manner,&#8221; Jason said. &#8220;We were getting shot at from four different directions and we were walking around &#8212; walking around &#8212; because the Iraqis had our backs. I thought we were looking at some show for congressmen. It was that perfect.&#8221;

Woodruff&#8217;s injuries, along with those of his cameraman, Doug Vogt, signaled to many in the United States the continuing chaos and dangers of Iraq &#8212; for soldiers, journalists and Iraqis. But to U.S. soldiers working closely with Iraqi forces, it meant something else: an increasing competency within the Iraqi army.

Jason and McFarlane are among 110 U.S. soldiers on 10-man Military Transition Teams brought to Iraq from a variety of previous commands, working in the Taji area about 12 miles north of Baghdad to train and advise Iraqi soldiers.

Both are a little impatient with talk about a civil war between Shiites and Sunnis, corruption in the ranks or ties to terrorism, saying it doesn&#8217;t reflect their experience. Although most of their soldiers are Shiites, much of the leadership is Sunni, and they say the two groups work together well. Although they patrol some Sunni areas, the Shiite soldiers are respectful to that population, the U.S. advisers say.

Woodruff was reporting on the training team and Iraqi soldiers. He started out from Camp Taji in one of six up-armored U.S. Humvees on the patrol. After about an hour of traveling on the main road where bombs are set nearly every day, he switched to one of two Iraqi armored vehicles on the patrol. McFarlane said it was likely insurgents began plotting the attack knowing a news crew was about.

After Woodruff was injured, there was discussion about whether it had been wise for him to get into the Iraqi vehicle, which is described as &#8220;lightly armored.&#8221; But McFarlane and Jason said it wasn&#8217;t the vehicle that was unsafe &#8212; Iraqi soldiers sitting inside it were uninjured.

What made Woodruff and Vogt vulnerable, they said, was their standing up in the vehicle hatch to film their report. They said Iraqi soldiers routinely stand in the hatch.

After the bomb went off, McFarlane rushed to where the two journalists and an Iraqi noncommissioned officer lay injured. Machine-gun fire came from all directions, McFarlane said, from 10 or so shooters.

The unit&#8217;s Iraqi interpreter &#8212; whose patrols have seen 37 roadside bomb attacks, 25 of them on his own vehicle, three of them wounding him and one sending him to the hospital &#8212; told McFarlane that the blood splashed all over him was not his own and that he was uninjured.

Doctors say the immediate treatment Woodruff and Vogt received, and the fact that both were wearing body armor, were crucial in their survival. ABC News called McFarlane, Jason and other U.S. soldiers on the patrol heroes, and did a story on them.

Though some have criticized the journalists&#8217; decisions and the coverage of their injuries, McFarlane and Jason said they had no problem with any of it.