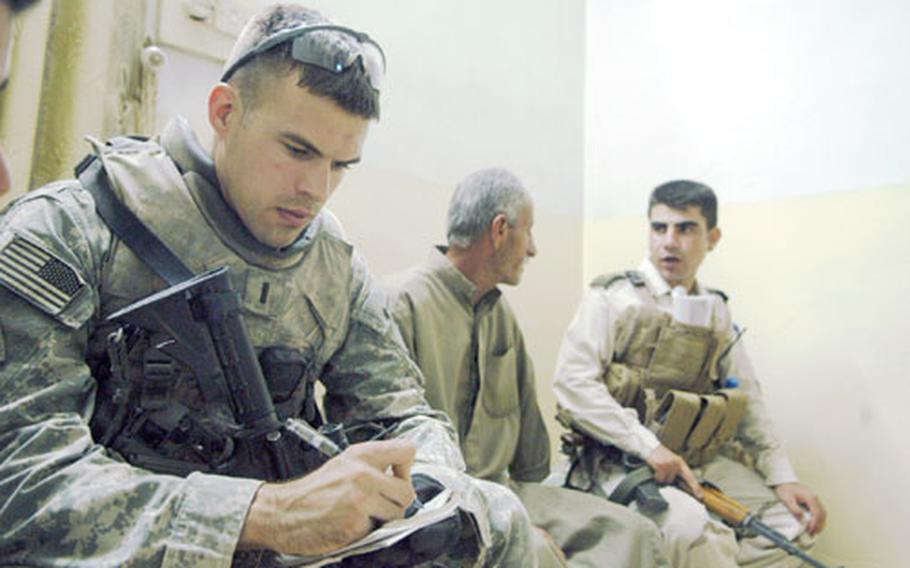 Iraqi army 2nd Lt. Brosk asks a man if he has seen any suspicious activity in eastern Mosul’s Wahda neighborhood. It was the first time Brosk and his soldiers led a knock-and-search mission. U.S. soldiers in the area have begun to push Iraqi soldiers out in front in order for them to gain the trust of the local populace. (Photo by Sean Kimmons/S&S)

MOSUL, Iraq &#8212; The Iraqi soldiers exited their vehicles and quickly looked toward their U.S. counterparts for additional guidance.

Just moments before, the Iraqi unit had been briefed that they would lead the knock-and-search mission in eastern Mosul&#8217;s Wahda neighborhood. The U.S. soldiers were only there to observe and advise. It was first time these Iraqi soldiers were going solo.

That sentiment can be echoed in many parts of Iraq, where U.S. forces are handing over more responsibility to Iraqis. With the increased security of recent months, the focus has again turned to putting Iraqi troops out front.

Following some coaxing by the Americans on this night, the Iraqi squad began to enter and search homes by themselves. Iraqi 2nd Lt. Brosk then spoke to the men of the households to see if any had seen suspicious activity in the area.

Weapons caches recently found nearby and concerns about the area being a meeting place for insurgents were the reasons for the search mission, U.S. soldiers said. They hoped that putting an Iraqi face on these types of missions could relax some residents and spur more intelligence leads.

"We&#8217;re going to make a good relationship with Iraqi people and hopefully they help us," Brosk said.

Pfc. Jesus Carmona, an infantryman in Company A, watched over Iraqi soldiers clearing the homes and provided some tips along the way.

"It looks better for the neighborhood to see [Iraqi security forces] get more involved," Carmona, 19, of Hale Center, Texas, said. "It makes the locals feel comfortable with them coming instead of us."

Sunnis in Mosul largely look askance at Mosul&#8217;s Iraqi army troops, made up largely of Kurds who were former peshmerga soldiers. U.S. soldiers believe that in time residents will look at the Iraqi army as Iraqis, not Peshmerga, the militia in the autonomous region of Kurdistan that borders the city.

"It&#8217;s a function of our purpose to make sure the Iraqi army has the capability and understanding to execute the counterinsurgency fight once we&#8217;re eventually gone," said Maj. Trent Hunton, the battalion&#8217;s operations officer.

Midway through the recent night mission, AK-47 shots echoed into the street. A few Iraqi soldiers had fired warning shots in front of a car that was rapidly approaching all of the troops. In a city plagued with car bombs, it was a wise move in the eyes of U.S. soldiers.

"I&#8217;d rather them do that then have a car blow up any day," said Staff Sgt. Michael Hollis, a squad leader with Company A.

Throughout the mission, Hollis and others became impressed with how the Iraqi soldiers had mimicked their techniques.

At the last house, however, U.S. soldiers took over to question two people. They also collected their biometrics data, which would be used later to determine whether either of them should be detained.

"I think we definitely saw progress in one night, but it will take more time," said Smith, 24, of Johnstown, Pa.