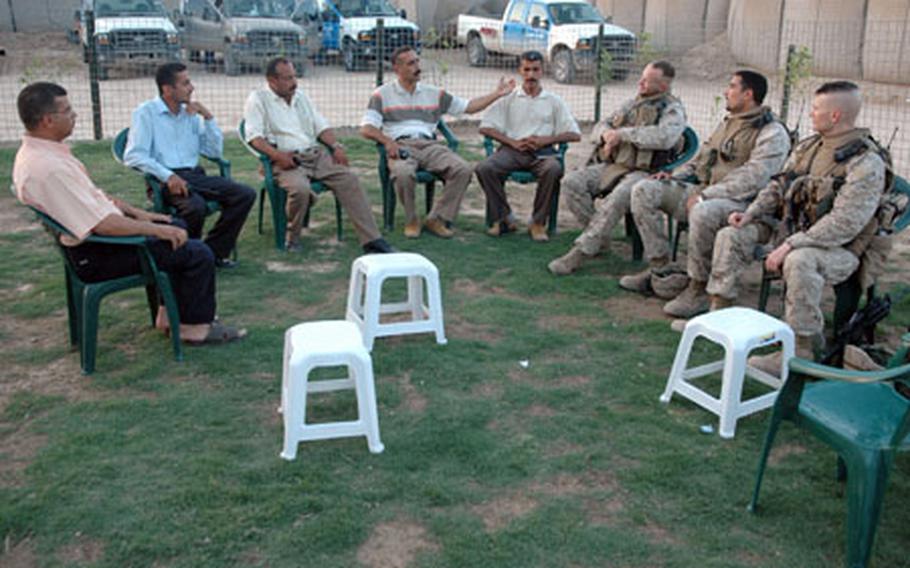 U.S. Marines from the 3rd Battalion, 6th Marine Regiment, and members of a local neighborhood watch group in Habbaniyah meet Sunday evening at the group&#39;s headquarters. The group is full of 400 volunteers who have stood themselves up as a police force. A local Iraqi Army commander has criticized the group as unprofessional, but Marines here say the volunteers are curtailing the violence. (Teri Weaver / S&S)

A crescent moon was rising, the birds were ending their songs and a group of Iraqi men sat on plastic chairs in their front yard, enjoying their tea. A man rolled out his rug in a corner of the yard and said his evening prayers.

The hosts sat down with a small group of Marines who were visiting this Iraqi neighborhood watch center on Sunday evening. Beyond the small patch of green grass and newly planted rose bushes were rings of protective barriers and concertina wire. Beyond the barriers lay the neighborhoods of Habbaniyah, a war-torn city between Ramadi and Fallujah that has grown quiet in recent weeks.

That quiet is a direct result of this neighborhood watch group, a band of 400 Iraqi men who carry guns, run checkpoints and have turned over weapons stockpiles and 250 suspected insurgents to the local Marines, according to Lt. Col. Jim McGrath, commander of the 3rd Battalion, 6th Marine Regiment.

McGrath, 41, of Laurel, Md., says this group of volunteers is key to improving Iraq, and he hopes the trend expands to Baghdad. That may be a hard sell, considering a nearby Iraqi army commander is suspicious of the untrained and unpaid group. The U.S. military, however, already has given it an official name: an Indigenous Counter-Insurgency Force.

Despite the criticism or the formal name, McGrath prefers to think of the group as a neighborhood watch. It started simply, with local residents trying to improve their streets and homes, he says.

The founder of the group agrees.

Majed is a local man who said he previously worked security for the Iraqi government for 20 years. This spring, he and 26 other men took up arms, turned a house into a base, attracted more members, and began taking back their neighborhoods, he said through a U.S. Marine translator.

As the tea was served, about 30 men stood around the seated group. Most were in loose-fitting shirts and trousers. A handful wore light-blue shirts, similar to those worn by Iraqi police. A few wore bullet-proof vests and were armed.

McGrath has worked to get the group supplies. He&#8217;s passed out the blue shirts in an effort to identify the men who are on the patrol. They have five Ford 350 trucks, which say Iraqi police on the side, courtesy of McGrath. When asked where the patrol gets fuel, he shrugged.

Iraqi army Lt. Col. Mohammed Fareed, whose battle space lies adjacent to McGrath&#8217;s, believes the neighborhood patrol itself is unfinished, a group of unprofessional and untrained men who could do more harm than good.

McGrath acknowledges the criticism of his ally. The Marine commander even calls the group &#8220;the good bad guys.&#8221;

But he also says that the calm in the area has come as the watch patrol has grown. They find hordes of weapons, and their tips about known insurgents pay off, he said. A suicide car bomber hit a bridge the previous week, the first outright act of violence in weeks.

McGrath&#8217;s battalion assignment has adjusted accordingly. Five months ago, he had 13 command outposts in the area, covered by three companies. Now he&#8217;s got five outposts covered by one company.

Gunnery Sgt. Christopher Lowman, a member of India Company, is convinced the group is helping.

Earlier this year, the community lost 1,300 people in a month, Majed said, and McGrath nodded.

McGrath is working to get the group trained as formal police. A new training facility will open next month at Camp Habbaniyah, and 50 of the men are signed up for the class.

McGrath also is trying to get the surrounding U.S. and Iraqi forces to recognize the men as legitimate so that they can coordinate ambulance trips to and from Ramadi and pass through military checkpoints without hassle.

Majed and his crew have an ambulance, a new acquisition McGrath inquired about on Sunday. Majed said they took a van from a former bad guy, and Majed painted it himself.