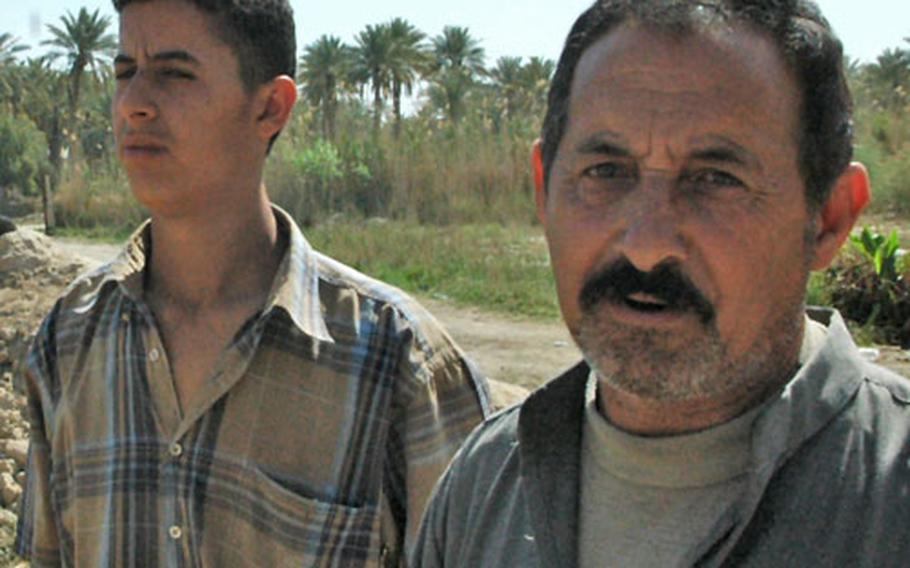 Sa’ad Farhoot, right, 54, a retired industrial worker, says he doesn’t trust many of the local Iraqi police officers. They tend to sympathize with Iran, he says. He is accompanied by his nephew. (Andrew Tilghman / S&S)

BAQOUBA, Iraq &#8212; As if there were not enough problems to worry about inside Iraq, Sheik Mohamed Nuri believes that across the eastern border, thousands of Iranians are waiting for a chance to take over his tribe&#8217;s small farms in rural Diyala province.

&#8220;They want to move all the Sunnis out of this village so that the Iranians can come live here,&#8221; Nuri, the leader of a small Sunni town about 30 miles north of Baghdad, told several U.S. troops during a recent meeting.

Iranian conspiracy theories are spreading like wildfire among many Sunni residents in this province that abuts Iraq&#8217;s eastern neighbor. With sectarian tensions surging in recent weeks, suspicions between Sunnis and Shiites have taken on an international scope in this demographically mixed border province.

Several Sunni sheiks recently told a local U.S. commander that an Iranian operative was living in a nearby village and training Shiite militias to assault neighboring Sunnis. The tip was indicative of widespread beliefs among Sunnis that Iraq&#8217;s Shiites are scheming with Iran, a longtime regional rival and the world&#8217;s largest predominantly Shiite country.

Lt. Col. Thomas Fisher said it would be &#8220;unwise&#8221; to dismiss those concerns, but he has seen little evidence that Iranians are operating in the Baqouba area.

Gen. John Abizaid, commander of U.S. forces in the Middle East, said recently that Iranian agents are operating inside Iraq but there was no proof that the government in Tehran authorized the anti-government activities.

&#8220;There are clearly Iranian intelligence agents operating inside Iraq, and Iranian-produced explosives have found their way across the border,&#8221; Abizaid told a reporter in Amman, Jordan.

Yet fears alone also can undermine efforts to stabilize Iraq by aggravating relations with the local Iraqi police, many of whom are Shiite Muslims and have been accused of operating sectarian death squads targeting Sunni Muslims in Baghdad.

&#8220;We don&#8217;t trust them because most of them tend to have sympathy for Iran because they are Shiite. They are really just an Iranian militia,&#8221; said Sa&#8217;ad Farhoot, a 54-year-old retired industrial worker in Baqouba who has two wives and five children.

Farhoot expressed his concerns with local U.S. troops recently and asked about creating his own neighborhood security force.

&#8220;We want our own militias. How do we get badges for our night security guards?&#8221; Farhoot asked several U.S. soldiers patrolling his Baqouba neighborhood.

Worries about Iran are prompting some Sunnis to set armed guards at their local mosques.

Abdul Azak al-Owsey, a 56-year-old Sunni man, told several U.S. soldiers that they will find men with assault rifles at his neighborhood mosque in Baghdad. &#8220;They are expecting visitors from Iraq to attack the mosque,&#8221; al-Owsey said.