Iraqi students get a taste of West Point education 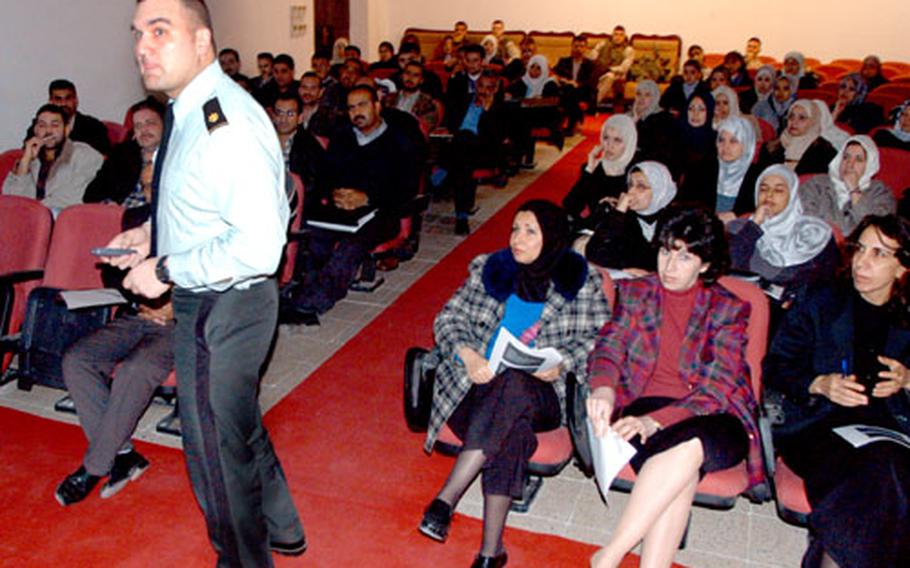 The U.S. Military Academy at West Point, N.Y., sent eight professors to the Iraqi capital over the past two weeks, hoping to open young minds to America&#8217;s military education system.

While Emad said she enjoyed hearing Army Maj. Edward Mattison discuss how his cadets apply algorithms to Java script, she rushed past armed soldiers as she left class.

Troops said the campus mosque preaches anti-American ideas. Students mostly glare at or ignore troops on duty. Students were reluctant to talk about the lectures after class.

That may not be exactly the response military leaders expected when they envisioned the plan.

On Jan. 5, the first of group of four officers began teaching topics such as civil engineering, physics, rhetoric and psychology. Then another group offered seminars on political science, chemistry, math and computers.

&#8220;When they see a professor wearing a uniform, they see not only can soldiers carry weapons but we also carry books,&#8221; said Lt. Col. Pete Jones, commander of the 1st Battalion, 6th Infantry Regiment, whose soldiers provide security on campus.

Mattison and fellow instructors wore business-style uniforms rather than desert fatigues. Soldiers scanned students with a hand-held metal detector before entering the classroom.

During each hour-long session, Mattison, 35, of Corning, N.Y., clicked through a slide presentation that discussed how he teaches future military officers to make a simulated robot follow a computerized maze. Most Iraqi students understand English, but Mattison had to slow his speech for some, he said.

Men sat on one side of the lecture hall, women on the other. Emad, who wears her hair in a ponytail, stood out among the other female students, most of whom had their heads covered with light scarves. Emad jotted down notes each time Mattison spoke.

&#8220;These students are not used to interacting with professors,&#8221; Mattison said. &#8220;What their professors said was gospel, and they would write everything down because they don&#8217;t have many textbooks.&#8221;

The military educators had the best intentions: broadening the horizons of students and faculty who have few teaching resources. After Desert Storm in 1991, educators in Iraq were cut off from the rest of the world.

Following the U.S.-led assault last March, Iraqis looted the university, which sits along the banks of the Tigris River in the heart of the Iraqi capital. Professors have been teaching with minimal resources.

Mostly, the university lacks books. When Kaufman sent a note back to cadets requesting used texts, they responded with about 10 tons worth, he said.

Classes at West Point resumed on Jan. 12, but the handful of instructors remained in Baghdad until Friday.

Kaufman plans to continue the cooperation with Baghdad educators, a relationship he hopes inspires other colleges to replicate in the near future, he said.

While it may take longer for Iraqi students to accept that soldiers can use books as well as rifles, Mattison believes his lectures helped open doors.