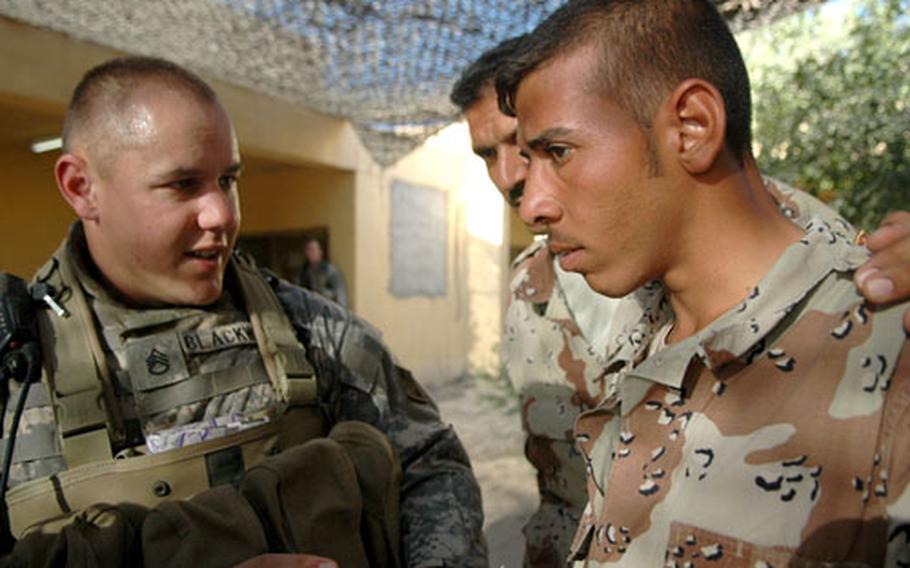 IRAQI ARMY BASE AL QUDISS, Iraq &#8212; To hear it from an Iraqi soldier, the needs of the nation&#8217;s developing army are heartbreakingly simple: Soap. Bullets. Weapons. Better food.

To ask an Iraqi officer &#8212; or an American soldier from one of the Army&#8217;s Military Transition Teams, which help train Iraqi forces &#8212; logistics is a serious issue that has stymied an eager and increasingly competent force.

Soldiers from 3rd Battalion, 1st Brigade, 4th Iraqi Army Division, which is based in Tikrit, spin a familiar tale: things are improving. Citizens&#8217; trust is increasing. Soldiers are better trained. Patrols and missions are up. For the 3rd Battalion, roadside bombs have decreased by a whopping 70 percent in recent months thanks to greater vigilance on the roads.

But the relationship with American forces is still a dependent one, and may be for years to come, leaders say.

&#8220;This battalion cannot conduct the majority of operations without the help of the (military transition) team,&#8221; said battalion executive officer Lt. Col. Hamid Ali, 41. &#8220;They give us support in fuel, equipment, weapons. Our battalion cannot get any equipment from our chain of command without the team&#8217;s support.&#8221;

American officials agree that the Iraqi army&#8217;s logistical issues &#8212; which are ultimately the responsibility of the Iraqi Ministry of Defense &#8212; need addressing.

However, leaders in this ethnically mixed area northeast of Baghdad say the ethnically mixed battalion (just more than 50 percent is Shiite, the rest Sunni) has met with great success given the logistical constraints.

The 3rd Battalion regularly accompanies the American 1st Battalion on missions and large operations, and the two units collaborate at the company level, Martindale said.

But the Iraqi battalion also has grown to be more autonomous.

&#8220;Before we got here, they ran combined missions with coalition forces,&#8221; said Capt. Jamal Hatcher, a member of the training team.

Iraqi battalion officials say they have more control of their battle space than ever before.

&#8220;We can secure our area of operations 100 percent: 75 percent ourselves and 25 percent with American help,&#8221; said Hamid, the battalion executive officer.