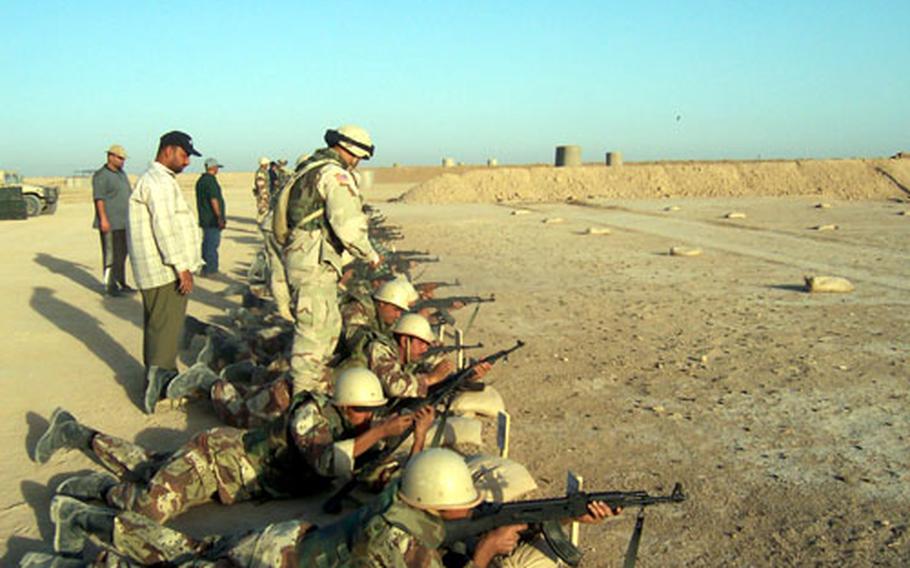 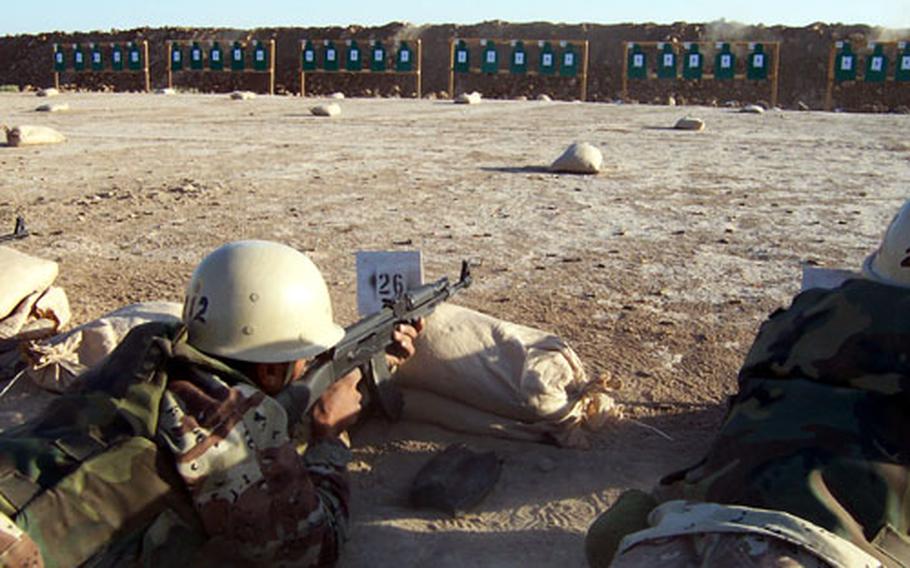 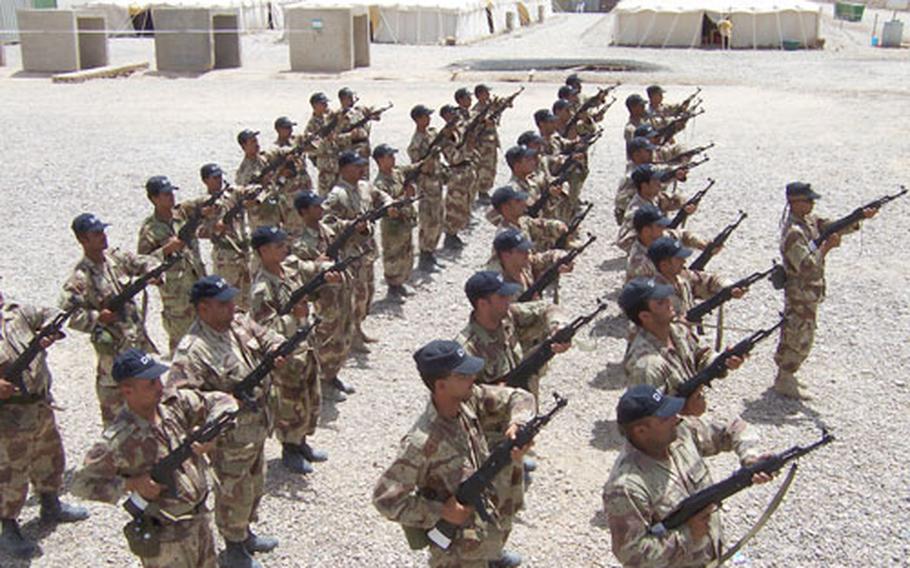 Iraqi National Guard soldiers practice riot techniques in June during basic training. The two-week course was held at Butler Range, Forward Operating Base Warrior. The soldiers also learned basics like drill and ceremony in the course. (Courtesy of U.S. Army)

BAGHDAD &#8212; Less than two months ago, the 42 soldiers who make up the 4th Platoon of the Iraqi National Guard&#8217;s Company A, 302nd Infantry Battalion were maneuvering their cars through the traffic-riddled streets of Baghdad just like everyone else.

Now, the ING soldiers are setting up security checkpoints and conducting foot patrols to provide security and gather information on insurgents.

And their U.S. Army advisers, an embedded cadre of six soldiers, are amazed at how far the ING soldiers have come so quickly.

&#8220;The American cadre is really impressed,&#8221; said Staff Sgt. James Martin, a U.S. Army cadre member of the 4th Platoon. The soldiers will remain with the 4th Platoon in an advisory role throughout their rotation in Iraq.

The training for ING soldiers is similar to U.S. Army basic training. The Iraqi soldiers spent two weeks at Forward Operating Base Warrior in Baghdad, where the 4th Platoon is currently headquartered, to learn basic soldiering skills such as drill and ceremony and keeping their barracks clean, Martin said.

At Butler Range on FOB Warrior, all ING soldiers learn combat techniques and other skills they need to conduct foot patrols and operate checkpoints.

First Lt. Emad Rassol Salam, executive officer for 4th Platoon, said through an interpreter that the soldiers learned such skills as individual movement, clearing a room during a search or raid, identifying improvised explosive devices and unexploded ordnance, weapons cleaning and weapons qualification for the AK-47 rifle from U.S. Army noncommissioned officers.

The basic training also covers procedures for proper treatment of Iraqi citizens at checkpoints and for those that the ING soldiers may have to detain, Salam said.

Each platoon has Iraqi women in its ranks &#8212; and in uniform &#8212; to conduct necessary searches of women during checkpoints and patrols, Salam said. Women earn the same salary as their male counterparts, he added.

The rigorous basic training schedule ran from 4:30 a.m. to 10 p.m., with the soldiers getting time off for meals and afternoon prayers, Martin said.

The training seems to have paid off, based on how the Iraqi people receive the national guard soldiers as they work in crowded city streets.

&#8220;They have noticed a difference between previous checkpoints [by the former Iraqi Civil Defense Corps] and our checkpoints,&#8221; Salam said. &#8220;They have seen the quick reaction of our people to anything that happens. We deploy immediately in spite of our limited capabilities with communication and vehicles.&#8221;

The 4th Platoon has spent the three weeks since graduating basic training in on-the-job-training, with cadre members accompanying them for checkpoints and patrols. However, the ING soldiers spent Tuesday and Wednesday conducting missions solo, with U.S. cadre members available for backup if needed, Salam said.

Salam said the training is valuable to the Iraqi soldiers.

&#8220;I thank the Americans for setting up this new training system and teaching us raid operations and tactical movement techniques,&#8221; he said. &#8220;Our soldiers opened their minds to the Army sergeants who explained these methods to us, and we gained more knowledge from the American soldiers.&#8221;

BAGHDAD &#8212; Iraqi National Guard soldiers from 4th Platoon, 302nd Infantry Battalion have all the training, equipment and uniforms they need for the checkpoints and patrols they run on the busy streets of Baghdad.

And in a couple of weeks, they&#8217;ll have military identification cards for their wallets and rank insignia for their collars.

For now, enlisted soldiers in the unit are wearing the U.S. Army-equivalent rank insignia, but ING-specific rank will be available soon, said 1st Lt. Emad Rassol Salam, executive officer for the platoon.

The soldiers are getting three meals a day, whether at the Forward Operating Base Warrior dining facility where the headquarters is, or delivered to the checkpoints they set up in the city, according to Staff Sgt. James Martin, a U.S. Army embedded cadre member with the platoon.

&#8220;The cadre plays an advisory role only. The ING [leadership] runs the platoon and missions, and we are here to advise them.&#8221;

The rank structure is similar to that of the U.S. Army, but the insignia will be different. Iraqi enlisted soldiers will be required to salute U.S. officers and U.S. enlisted troops should salute Iraqi officers, Salam said.

The ING soldiers are assigned their own AK-47 rifle and are issued uniforms, body armor and helmets, according to Salam.

The differences between the ING and the former Iraqi Civil Defense Corps are immense, Salam said, especially in the screening process for new recruits.

&#8220;It was all volunteer before, and people signing up could have been insurgents or Baath party supporters,&#8221; Salam said. &#8220;There were no checks into the background of the volunteers. Now, the Ministry of Defense conducts [background checks] and three forms of identification are required of [potential] recruits.&#8221;

The ING soldiers are conducting missions similar to those being conducted by their U.S. counterparts, including setting up checkpoints and conducting foot patrols.

While the ING soldiers are issued much of the same equipment U.S. soldiers get, the pay is not comparable.

Enlisted soldier pay ranges from about $145 per month for a private to about $200 for a sergeant major; a battalion commander brings home about $225 each month, according to Salam.

He said he would like to see enlisted ING soldiers earning more.

&#8220;If you compare the duty with the pay, it&#8217;s not enough,&#8221; Salam said, adding that the salary includes a hazardous-duty bonus. &#8220;I hope a pay increase begins in August, especially for the soldiers. There is no [officer] presence at the checkpoints, only soldiers are out there. The soldier is very important. His existence is our existence.&#8221;