A bomb disposal expert prepares to destroy two French-made Roland surface to air missiles and an assortment of rocket-propelled grenades found on the outskirts of Bi’aj in northwestern Iraq on Friday. U.S. and Iraqi troops learned of the weapons cache during a cordon-and-search operation in the struggling town. (Monte Morin / S&S)

A bomb disposal expert prepares to destroy two French-made Roland surface to air missiles and an assortment of rocket-propelled grenades found on the outskirts of Bi’aj in northwestern Iraq on Friday. U.S. and Iraqi troops learned of the weapons cache during a cordon-and-search operation in the struggling town. (Monte Morin / S&S) 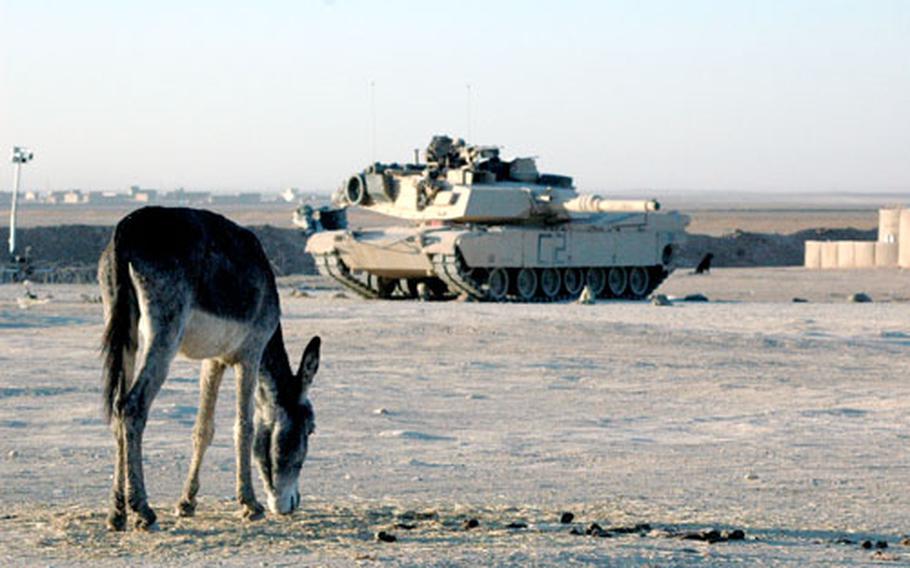 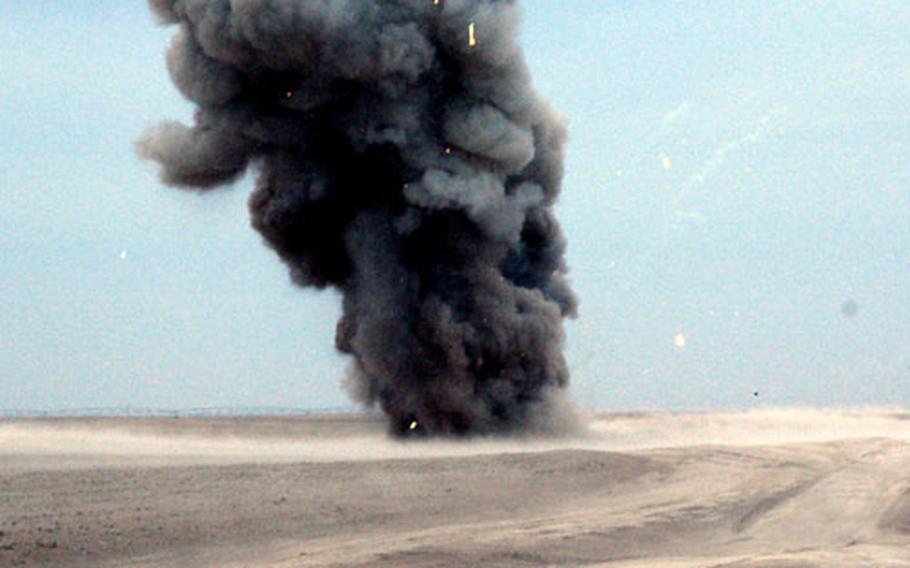 A column of smoke rises from the sands outside Bi&#39;aj after demolitions experts destroyed a hidden cache of surface to air missiles and rocket-propelled grenades. (Monte Morin / S&S)

BI&#8217;AJ, Iraq &#8212; The two missiles were stashed on the outskirts of town beneath heaps of powdery earth. Soldiers swept sand from the insurgent warheads like archaeologists in a low-budget mummy flick.

&#8220;These things could do some serious damage,&#8221; Capt. Mike Davis said as he eyed the French-made Rolands. The rockets were placed well within striking distance of his men at Camp Apache.

Davis&#8217; words were confirmed 30 minutes later when a munitions expert detonated the cache. A brilliant light flashed silently across the sand like a strobe, followed moments later by a sharp, flat &#8220;BANG!&#8221; Then, an enormous column of black smoke raced skyward as chunks of glowing metal fell to Earth.

The detonation marked the dramatic conclusion Friday to a daylong cordon-and-search operation aimed at capturing a cell of suspected insurgents in this small, Arab town in northwestern Iraq.

Although this ethnically and religiously diverse region near the Syrian border has remained largely peaceful in the wake of a September offensive in Tal Afar, the situation remains fragile. Commanders in the 1st Squadron, 3rd Armored Cavalry Regiment and the 3rd Brigade, 3rd Iraqi Army Division hope to prevent a surge in violence in the run-up to the Dec. 15 parliamentary election.

In what U.S. military commanders described as a big step forward, the search was planned and executed by 600 Iraqi soldiers, with support from roughly 200 U.S. troops. As America debates its exit strategy in Iraq, Friday&#8217;s exercise provided a glimpse into the evolution of Iraqi army units as they prepare to fight a lingering insurgency on their own.

The operation began before dawn, as Apache Troop tanks squeaked into position and Iraqi soldiers rode into town. A Humvee mounted with loudspeakers wound through streets, blaring Arabic messages. &#8220;Remain indoors,&#8221; it said. &#8220;Be patient as we root out the evil people in town.&#8221;

Bi&#8217;aj, a struggling town with medieval sanitation standards, was once a rest stop for Sunni Arab insurgents traveling from the hotbed of resistance of Al Anbar province to the northern cities of Tal Afar and Mosul, the military says. Killing or capturing insurgents here could disrupt that flow.

To maintain security, Lt. Col. Gregory D. Reilly, commander of 1st (&#8220;Tiger&#8221;) Squadron, ordered engineers to surround the hamlet with an earthen berm. Anyone who enters or leaves Bi&#8217;aj must pass through a guarded checkpoint.

The first glitchThe operation ran into its first glitch shortly after sunrise. Few residents were heeding the message to stay indoors and crowds of young men clustered in the town&#8217;s trash-strewn market area. When loudspeakers at a nearby mosque sounded the call to prayer, soldiers realized they faced a major dilemma. The operation had inadvertently been scheduled for a Friday &#8212; the Muslim holy day &#8212; and ordering residents not to attend prayer risked offending the entire town. On the other hand, allowing residents to attend prayer would provide cover for insurgents looking to escape.

Fadhil, a lanky man with a mischievous grin, wore a red stripe on his epaulettes. The insignia marked him as a graduate of Iraq&#8217;s prestigious Army Staff College.

&#8220;It will not be good if we prevent people from going to prayer,&#8221; the Iraqi officer told Davis. &#8220;We will have a bad situation.&#8221; After a period of some confusion, Iraqi commanders arrived at a solution. Residents would be permitted to attend prayer in one of several town mosques, but they would not be permitted to move from searched areas to unsearched areas.

As the operation progressed, Davis grew frustrated with what he saw. Iraqi troops were walking in and out of houses at a rapid clip. While the operation was set to last four days, it was apparent that the Iraqi troops planned to wrap things up on the first day.

After a brief discussion with his officers over a walkie-talkie, Fadhil turned to Davis. &#8220;They say, no, they&#8217;re doing a good job searching. We&#8217;ve got detainees,&#8221; Fadhil said. The Iraqi officers argued that less intrusive searches would better win them the support of residents.

The mayor shows upDavis brightened though when he learned that the town&#8217;s long-absent mayor was on hand for the operation. Abdul Raheem Jasim Al Mutlak had been appointed mayor by his uncle, the previous mayor, even though he lived in another city and had not visited the town until that day.

Davis relished the thought of dragging the nattily dressed mayor into the town&#8217;s sewage-clogged streets and confronting him with problems of his townspeople.

As cows, donkeys and goats munched piles of garbage, and small children ran barefoot through vacant lots strewn with trash, Davis and the mayor hopped over streams of sewage and made their way through town. The mayor shook hands and kissed residents with a cluster of Iraqi and U.S. troops in tow.

As the day progressed, U.S. and Iraqi officers took stock of the operation. On the plus side, Iraqi soldiers captured four suspected insurgents and helped locate the missile cache. On the minus side, Iraqi units leaked word of the operation four days before. Gen. Hassan Abdul Karim, commander of the 3rd Brigade, acknowledged the security breach. &#8220;Half the insurgents left and the other half hid,&#8221; he said.

To Tiger Squadron commanders, the operation represented a success in the Iraqi army&#8217;s evolution. It marked the first time two separate battalions were able to function in tandem.

&#8220;Two months ago this would not have been able to happen,&#8221; said Capt. Scott Wicklund, executive officer of Apache Troop.

As night fell, and Iraqi soldiers proclaimed the mission completed, American and Iraqi commanders met for a special dinner in the Iraqi camp. Eating with their hands, in accordance with Iraqi custom, the men pulled meat from the bones of roasted goat and scooped handfuls of rice into their mouths. As the men ate and joked with one another, a large screen television in the corner showed Arabic news footage of insurgents toting rocket propelled grenades and machine guns in the western city of Ramadi.

A hush fell over the room as the men turned to watch the images.