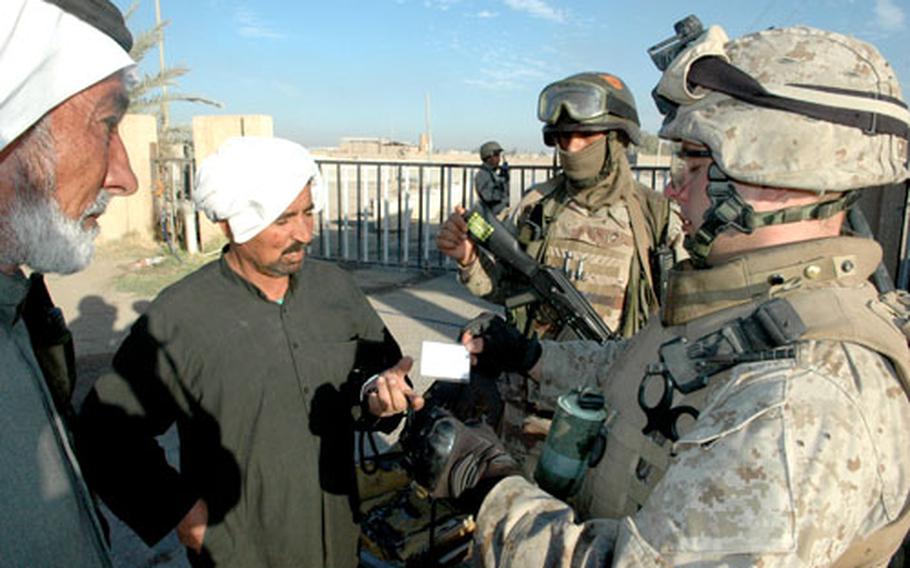 Marine Cpl. Ricky Gray and an Iraqi soldier conduct a joint patrol outside the city of Fallujah, where an Iraqi army unit is training to operate independently in the restive Sunni region. (Andrew Tilghman / S&S)

Marine Cpl. Ricky Gray and an Iraqi soldier conduct a joint patrol outside the city of Fallujah, where an Iraqi army unit is training to operate independently in the restive Sunni region. (Andrew Tilghman / S&S) 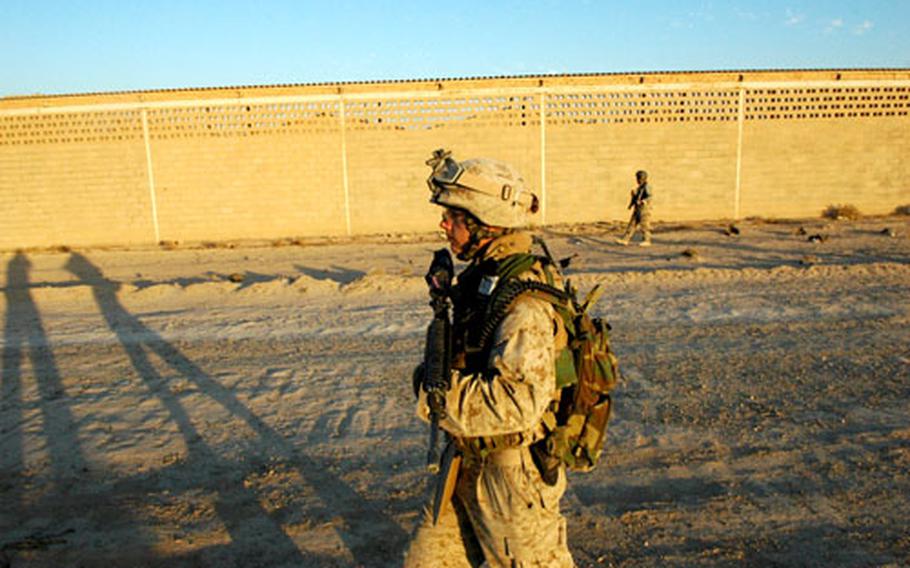 AL KARMAH, Iraq &#8212; Cpl. Ricky Gray was leading a patrol of Iraqi army soldiers a few miles east of Fallujah when a large flatbed truck rumbled along a back road toward the troops.

&#8220;Shoot him!&#8221; Gray shouted to the Iraqi solider who was standing in the road and pointing an AK-47 straight at the vehicle.

The rifle coughed a couple of warning shots and the truck halted, allowing Gray to drop back and let the Arabic-speaking soldiers search the truck and interrogate the driver.

Moments later, a burst of nearby gunfire prompted Gray to shout more instructions to the dozen Iraqi soldiers under his watch.

It was a routine training patrol for the fledgling Iraqi army unit in Anbar province, where daily insurgent attacks offer real-life tests for local forces preparing to step up their responsibilities alongside the U.S. Marines posted here.

Gray, a 23-year-old from North Carolina, was one of three Marines guiding a patrol of Iraqi soldiers Sunday, a drill that aims to infuse the local forces with some of the U.S. Marines&#8217; discipline, tactics and confidence.

Training of Iraqi security forces is occurring across the country. But this unit may offer a unique window on the future. It is the most independent and well-trained Iraqi battalion in Anbar, home to the restive Euphrates River corridor that poses the biggest challenge to the local forces trying to take control of their own country.

The number of Iraqi troops operating in Anbar province has risen to 16,000 from about 2,500 in March, Maj. Gen. Stephen T. Johnson, commander of Multi-national Force West and Second Marine Expeditionary Force, told the New York Times.

When Bennett arrived in August, the Iraqi soldiers were remarkably undisciplined: living in disheveled barracks, patrolling in clusters rather than in formation, and handling weapons in a lackadaisical, or even dangerous, manner.

In recent months, however, the unit has improved dramatically and may soon begin to patrol independently in this volatile, predominantly Sunni city.

In the nearby city of Naser Waslam, about 600 Iraqi soldiers from the same battalion control the comparatively calm and mostly Shiia area along the highway between Fallujah and Baghdad.

The only U.S. troops posted with the Iraqi unit in Naser Waslam are a dozen U.S. Army soldiers that form a military transition team and coordinate all communication, travel and joint operations with surrounding U.S. forces. The Iraqi brigade remains under the command of the U.S. Marines and Regimental Combat Team 8 at Camp Fallujah.

Iraqi army leaders are confident in their progress, but say unequivocally that the insurgents remain too strong for them to manage without some support from the Marines.

&#8220;We are capable of securing the area. But of course we need the Marines to help us and work with us because the weapons the enemy has are more powerful than the weapons we have. And they have more capability of using those weapons,&#8221; said Col. Shokei, commander of the Iraqi 4th Brigade.

On the patrol Sunday, Gray responded to the sound of gunfire and readied the Iraqi troops for a potential firefight. But he and several Iraqi soldiers soon realized that the gunfire came from another Iraqi solider who was firing at a car coming from the opposite direction that had also failed to stop.

&#8220;They did it just right,&#8221; Gray said afterward, noting that the Iraqi soldier fired warning shots rather that shooting into the windshield, and the squad leader immediately moved down the road to monitor the incident.

Gray laughed and said he became confused by the gunfire because his ear is trained to distinguish between various weapons, and the Iraqi soldier startled him with his Russian-made PKC machine gun, a weapon also frequently used by insurgents.

The Iraqi troops tend to fire their weapons more frequently than the Marines, who are trained to be conservative in their use of ammunition. Marines also adhere to strict rules that dictate when and where they can shoot.

&#8220;The Iraqis lay out a lot of rounds,&#8221; Gray said as he walked back toward the fortified camp that his platoon of Marines shares with two platoons of Iraqi soldiers.

The Iraqi soldiers &#8212; known to the Marines as jundis, an Arabic term for low-level soldier &#8212; may be ready for independent patrol, but they are still working on broader tactical skills required to function without Marine oversight.

&#8220;I believe they&#8217;re ready to patrol on their own, but I also believe they would take the same route everyday if we let them,&#8221; Gray said, adding that varying patrols is key to safety and effective security.

The Iraqis use retail-model Motorola radios for their communications while on patrol. They are paid through the Iraqi Ministry of Defense, but continue to rely on U.S. forces for key logistical support such as gasoline for their trucks.

At several small bases around the Fallujah area, U.S. commanders plan to bring in Iraqi troops and reduce the number of Marines during the coming months.

Progress toward independence is steady, but the end is not yet in sight, said Maj. Kevin Clark, the coordinator of Iraqi security forces for Regimental Combat Team 8.