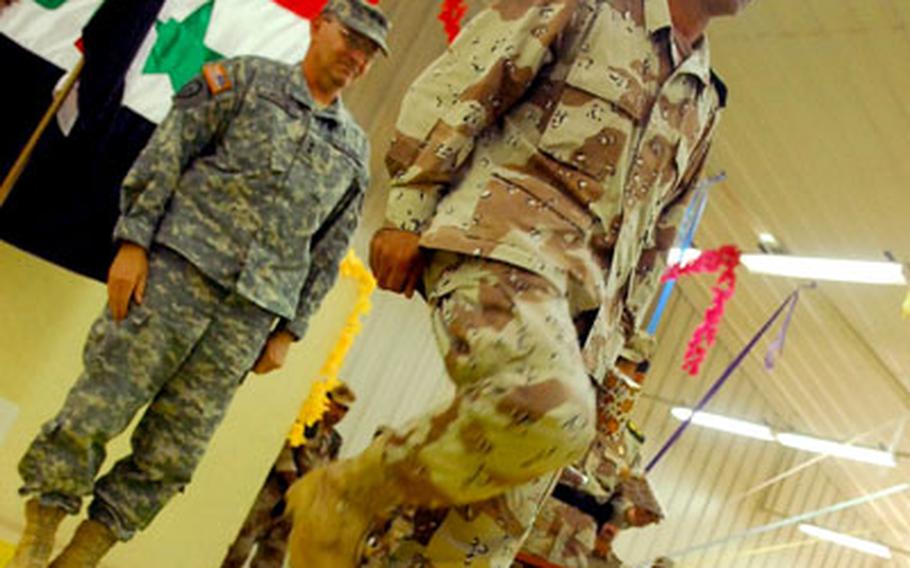 An officer with the 3rd Iraqi Army Division stomps his heel in salute after being presented with a gift by U.S. Army Maj. Gen. Benjamin R. Mixon, commander of the 25th Infantry Division, at a transfer of authority ceremony in northern Iraq on Monday. (Monte Morin / S&S)

That was the message U.S. and Iraqi army commanders delivered to officers and troops of the newly autonomous 3rd Iraqi Army Division at a formal transfer of authority ceremony Monday at this Iraqi military academy in the rolling, agricultural belt of northern Iraq.

In addition to seeking out and killing or capturing insurgents, commanders urged soldiers to keep their eyes open for and report instances of corruption and to cultivate good relationships with local residents and leaders.

&#8220;You will continue to have the full support of my division and my soldiers,&#8221; Maj. Gen. Benjamin R. Mixon, commander of the 25th Infantry Division&#8217;s Task Force Lightning, told Iraqi soldiers Monday.

&#8220;But what we also need now is the support of all local leaders, the leaders of tribes, mayors and governors. We need their help to achieve victory.&#8221;

Soldiers in the division fought in the battle to recapture Tal Afar from insurgents in September 2005 and also defended polling stations during Iraq&#8217;s historic constitutional and parliamentary elections.

Their area of operations is roughly the size of the state of New Jersey, and covers most of western Ninawah province.

It also encompasses more than 200 miles of barren border land between Iraq and Syria.

The area is a diverse mix of Kurds, Arabs and Turkomen and has, for roughly the last year, been comparatively peaceful.

A months-long period of quiet in Tal Afar however has been interrupted by a string of suicide bombings.

At a time when accusations of religious and ethnic persecution have tarred Iraqi security forces in other areas, an Iraqi Ministry of Defense general urged soldiers and commanders to treat civilians civilly and with respect.

The general also told the troops that corruption was an &#8220;infection&#8221; that was tearing Iraq apart, and that it was their duty to expose it when confronted with it.

Both U.S. and Iraqi commanders complain that government bureaucracy and power struggles are hampering the mission.

Among other issues, Mixon said he was frustrated by the Iraqi government&#8217;s failure to disburse close to $25 million in reconstruction funds earmarked for the city of Tal Afar, which suffered heavy combat damage in certain areas during Operation Restoring Rights.

The failure of the government to make good on this promise of reconstruction funds threatened to alienate residents.