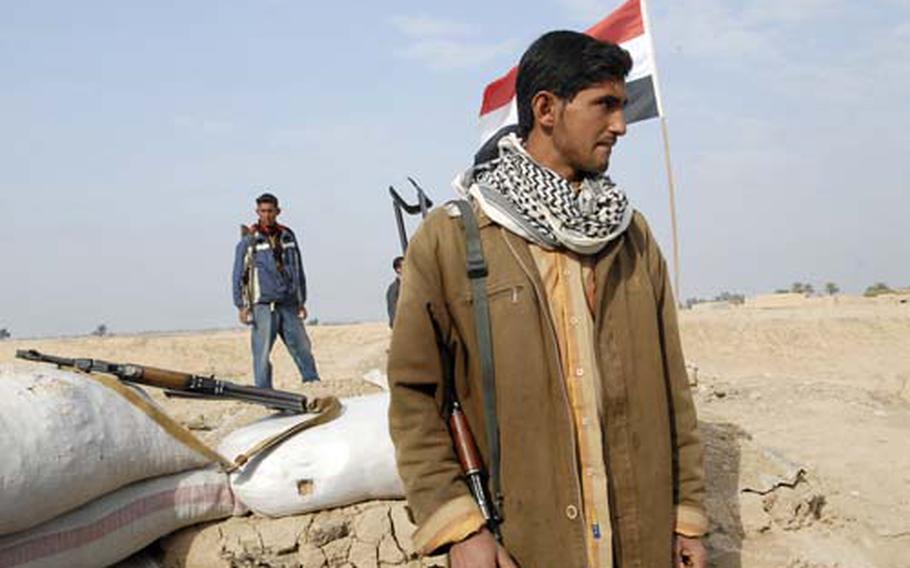 Iraqi “recruits” monitor a checkpoint near the farming village of Sari Tapa in northeastern Diyala province. The men are part of a new program in Diyala province that hires young men to man checkpoints. (Heath Druzin/S&S)

Iraqi “recruits” monitor a checkpoint near the farming village of Sari Tapa in northeastern Diyala province. The men are part of a new program in Diyala province that hires young men to man checkpoints. (Heath Druzin/S&S) 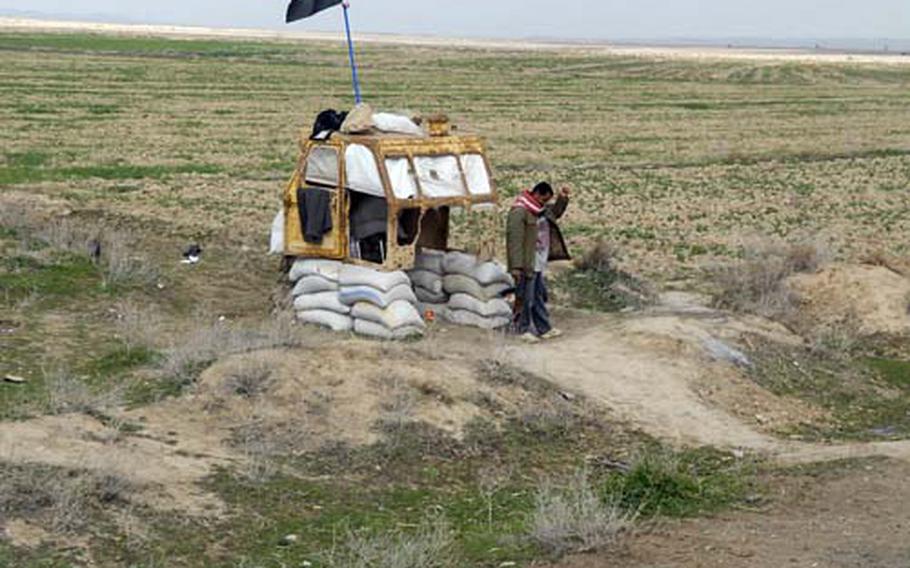 A "recruit" to a new security force in Diyala province gives the thumbs up to a U.S. convoy outside of Sari Tapa in the northeastern part of the province. (Heath Druzin/S&S)

SARI TAPA, Iraq &#8212; A group of Kalashnikov-wielding young men in street clothes sits by a makeshift checkpoint on the outskirts of this gritty farming village in northeastern Diyala province, rocks strewn across the road to slow cars. Under normal circumstances, U.S. troops coming upon such a group would ready themselves for a firefight.

This time, a group of American soldiers is stopping simply to check that the Iraqis have been paid.

Even by the lax uniform standards of Iraqi security forces, the group is ragtag, but it is part of a new force organized by the provincial government to augment the Iraqi army and provide jobs for Iraqis in places where unemployment is often the norm. The Diyala program is drawing mixed reactions from U.S. soldiers, who applaud the increased security but are deeply nervous about the potential for mistaken identity.

"Yeah, they scare the (expletive) out of us because they don&#8217;t have any uniforms," said U.S. Army 1st Lt. Cody Pittman, whose platoon patrols an area that includes the Sari Tapa and several other security stations.

The men making up the new force are known simply as "recruits," and the headquarters where they stay are called "security stations." They are paid by the Iraqi army.

Recruits get no formal training, though some have prior service in the army, and are as young as 16. After 90 days of checkpoint duty, recruits whom Iraqi army commanders deem to have done a good job are offered jobs with the army, much sought after by many young Iraqis as one of the few avenues to stable employment.

Recruits&#8217; biometric information is checked against an American database of suspected insurgents and their names are compared with a similar Iraqi army list, Pittman said.

The program is modeled loosely on the "Sons of Iraq," a group of mostly Sunni fighters once hostile to the government who turned against the insurgency, though the security station program is not aimed at recruiting former insurgents. Like members of "Sons of Iraq," security station recruits have become favorite targets of militants who have repeatedly shelled and shot at the stations.

On a sunny midwinter afternoon, Wazah Jumah, 20, mans a checkpoint on the edge of the farm fields and pasture lands that surround Sari Tapa. Wearing a sweat shirt and track pants, he says he joined the local security station because the money is better than farming and he wants to join the Iraqi army.

He says he&#8217;s not worried about the dangers of the job.

"I want to serve my country," he said.

His friend, 18-year-old Omar Ziadan Khalef, said economics drove his decision. "There was no job for me before," he said.

Adding the men to the already dizzying array of security forces descending on Diyala province &#8212; U.S. troops, the Iraqi army and police, as well as Kurdish Peshmerga, to name a few &#8212; makes some American soldiers in the area nervous.

The recruits have no uniforms. They&#8217;re trying to get armbands, but as of last Tuesday did not have them. The only way American troops can tell who they are is by getting locations of checkpoints from the Iraqi army. In an area where insurgents still regularly plant roadside bombs and occasionally use small-arms fire, soldiers worry that mistaken identity could lead to tragedy.

"If it came to getting in a fight in one of those places and they were there, it would be tough (to distinguish who&#8217;s whom)," said Pittman, with the 1st Stryker Brigade Combat Team, 25th Infantry Division.

There haven&#8217;t been any incidents between the two forces, but there was some confusion recently when U.S. soldiers came upon one of the recruits carrying his rifle far from his checkpoint, Pittman said. Suspicious, the soldiers stopped to question the man, who turned out to be waiting for a ride to work.

Despite the problems, Pittman said there is a big upside to the recruits, whom he compared to a neighborhood watch.

Iraqi Police Lt. Hamid Mahmoud, who was overseeing security for a polling station in Sari Tapa, said he has been happy with help he&#8217;s received from the recruits.

Salah Jaburi is commander of the Sari Tapa recruits, who range in age from 17 to 30. The grizzled Iraqi Army veteran said everyone knows each other in the small town and his men stop and question strangers driving into Sari Tapa.

"We have gathered the young people to protect the town," he said.

"We Iraqi people, we know how to use our weapons."