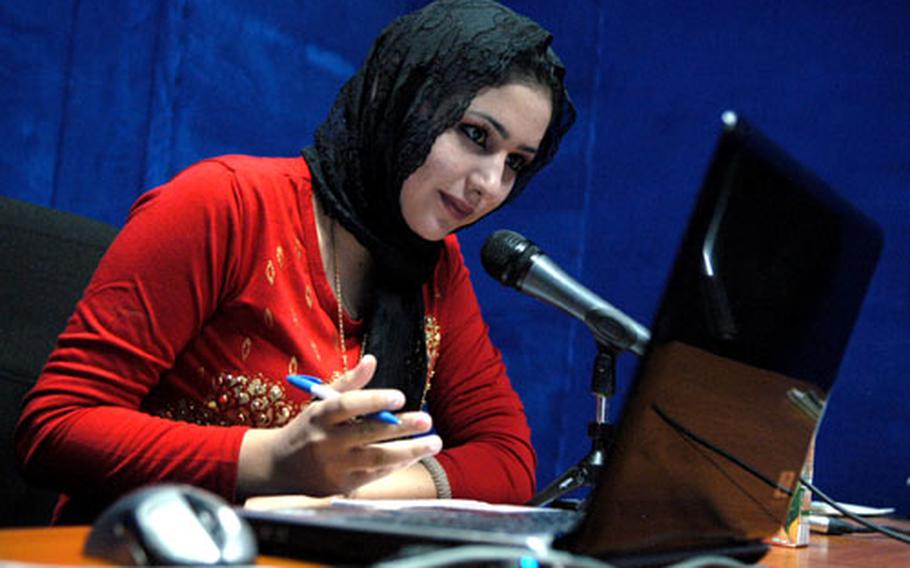 DIYALA PROVINCE, Iraq &#8212; From a heavily guarded radio station in a violent region, Donia Abid Latief relays a message of hope and peace to women.

In Diyala province, where the station is located, more than 20 women have become suicide bombers in the past three months, killing dozens.

Latief tries to end the deadly trend via the radio waves with her weekly show called "Doves of Peace."

"I want women to have a role and accomplish security in our province," Latief said through a translator following a recent show.

In her one-hour programs, Latief, a 21-year-old Shiite, tries to empower Iraqi women. She invites guests, typically women with leadership roles in the country, to share their insight. However, many turn out to be no-shows.

Still, her effort is to try "connecting women to other women," she said.

She believes al-Qaida in Iraq insurgents prey on depressed, uneducated women to carry out their dirty work.

Many, she says, want redemption because they&#8217;ve lost a husband or a child to ongoing violence.

"They go to the women who have the motives of revenge," she said of the insurgents.

Capt. Thomas Devore, of the 350th Psychological Operations Company, helps run the U.S.-backed radio program that began two months ago. "It&#8217;s the only show of its kind in Iraq," Devore, 36, of Sewell, N.J., said.

A recent show revolved around Baghdad&#8217;s first female taxi driver, considered a big deal since it is customary for women not to drive in many parts of the country. Latief said the woman&#8217;s husband had been killed and she needed to support her children through something besides begging. Latief then took some dozen on-air callers to discuss the controversial issue.

Many of the callers, mainly women, agreed with knocking down the cultural barrier.

A male Iraqi policeman argued the job is too dangerous for the opposite sex.

The province&#8217;s Iraqi police are slated to train their first female recruits this month; Latief encourages women to apply. She also urges them to attend college or learn a trade.

Last year, Latief quit law school at Diyala University out of fear of being killed by al-Qaida insurgents. Other students and professors were already being murdered around her, she said.

At the time, she was the voice of a different show that concentrated on the terrorist group&#8217;s atrocities.

"She was afraid to continue studying there." Samir Khamees, a 30-year-old Sunni who produces the radio show, said.

Her aspirations to be a lawyer still linger. Someday, she says, she wants to combine her skills to create a safe house where Diyala women can study and work. Money to run the house would be raised from sewing products made by the women, she said.

"Most women in Diyala are not educated," she said. "This project would educate them and give them work."

For now, she concentrates on deterring female suicide bombers.

"I want to change the image of women in Diyala," she said.